The Mercedes AMG GT making a splash in Berlin

A ray of sun in the rainy Berlin of February. That’s what the Mercedes AMG GT turned out to be in the capital city of Germany. The newest sports car by Mercedes-AMG was the VIP of a special photo session.

It probably brings back bad memories to mention a wall while in Berlin, even if 25 years have passed since the Berlin Wall has been taken to the ground. The ruins of the wall do not mean restraint any more, but, since November 1989, they have become the symbol of liberty. That’s just what the journalists from Motorward thought when they put the Mercedes AMG GT against the background of the graffiti wall. 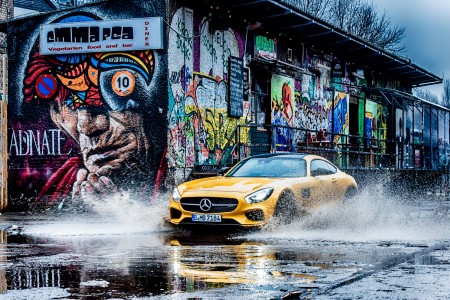 The yellow starred car launched this past September, at the Paris Motor Show, matched the décor perfectly. The versatile GT born on the racetrack to speed through chicanes of Nurburgring or Laguna Seca, can obviously whiz around the city and tempest in narrow street, while pedestrians ask: What was that? Can’t help you with that! Just like you, we only saw the puddle splash.

But this sports car does not need much talking. It can make a statement for itself. So enjoy the photo gallery with the car making a splash in Berlin: