Mercedes is on the verge of presenting the company’s first 4-door AMG GT coupe, the more powerful and spacious member of the GT family that saw the light of day in September 2014. After gazillions of teaser images and spy shots, the wait is almost over. The car has already arrived in Geneva and it is waiting for its world premiere.

The performance-focused 4-door coupe has been shot while testing in extreme winter conditions, in cities wearing the neon-green video game-like camouflage, in the wind tunnel, on the highway, winding roads and on the racetrack. In all of them, the wrap, regardless of the color, hides the sleek silhouette of the automobile away from the eyes of the curious. 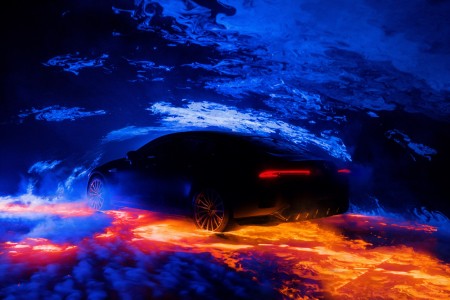 The Affalterbach-born sedan will come with the 4.0-liter twin-turbo V8, likely producing over 600 horsepower, under its strongly profiled elongated hood. A hybrid version of the series, like the concept previewing the series production model, with around 800 horsepower, is also in the cards to challenge the already super popular kid on the block, the Porsche Panamera Turbo S E-Hybrid, with 671 horsepower.

As the final countdown has begun in Geneva, there are only two days left to find out what hides underneath the flames of the newly released teaser photos. The shots reveal the Panamericana radiator grille with vertical slats, supporting the big-size three-pointed star logo at the center. Multi-spoke wheels, LED light, an elevated boot lid and a rear diffuser are details that unfold from the new photos. Yet, still unknown remains the name of the 4-door Mercedes-AMG GT Coupe.