Elena Luchian, January 28, 2016
3.29K 0
Home Smart Fortwo The Mercedes-AMG G65 is the meanest and the smart fortwo EV is the greenest

The Mercedes-AMG G65 is the meanest car and the electric smart fortwo is the greenest. For the tiniest of cars, it was the third consecutive year to get the title offered by the American Council for an Energy-Efficient Economy (ACEEE).

The giant SUV was the least environmental-friendly, according to the ACEEE’s annual ratings. The council tested all 2016 models, assigning a green score to each participant. The points are scored according to the lifetime pollution output, from manufacturing-related smog, CO2 tailpipe emissions, fuel sourcing and transportation.

The smart fortwo electric vehicle, featuring a lithium-ion battery, got a green score of 63, compared to last year’s 61, for its 2.77 mpg emission rate. The Mercedes mini-car was followed by the Chevrolet Spark EV and the Fiat 500E. Three different versions of the Toyota Prius made it to the top 10. The Dieselgate and its consequences kept all Volkswagen, Audi and Porsche models out of the first spots in the ranking. 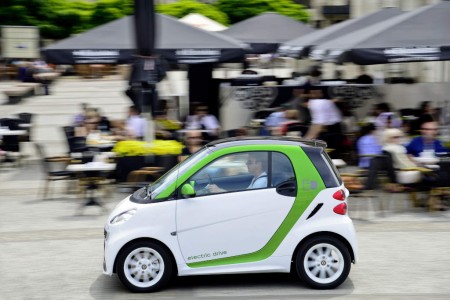 ACEEE’s ranking sees a world premiere in the 19 years that the council has been publishing the results: all cars in the top 10 are plug-in or hybrid versions.

At the opposite end of the greenest cars ranking there are the meanest cars, a list filled with trucks, exotic cars and five Mercedes-Benz SUVs

The Meanest List is the vehicles with the lowest ratings. The Mercedes-Benz G65 AMG, with its maximum output of 630 HP developed by its glorious V8 biturbo, is on top.