The Mercedes-AMG C63 S Coupe could be “something fast”

Now it’s settled. “Something fast” would bear the Mercedes-AMG C63 S Coupe badge. The video of the invisible car and the photos of the heavily camouflaged vehicle were enough to give us relevant clues.

It was the familiar sound of the 4.0 biturbo V8 that gave the first clue while roaring around the Hockenheim racetrack. Since it sounds a bit angrier than the soundtrack we’re used to, there is a big chance we’d have an S version racing here. 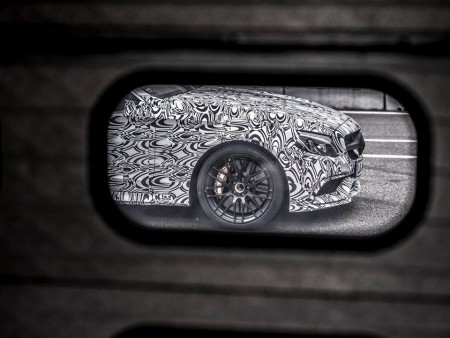 Even though everyone was expecting the street version of the Mercedes-AMG GT3, the intriguing teaser photographs of the car all dressed up in black and white showed different design lines than the muscular ones of the supercar and the hood seems to be much shorter than the GT one. By the look of those headlight, the the E63 is out of the question, also because the standard model won’t be out before 2016.

The six-piston brake calipers and the 19-inch wheels are wrapped in 255/35 tyres and sheltered under prominent wheel arches.

The coupe is set to receive added suspension tuning, a hydraulic steering system for an electric setup, a standardly fit mechanical lock differential, while the S model will get an electronic one.

The car will be revealed in September, at the Frankfurt Motor Show. Since we already got a video teaser and a set of pretty revealing pictures, the online debut of the new AMG super car is probably going to happen much sooner.