The long-wheelbase E-Class production gets underway in China

Made in China for China. The third generation of the long-wheelbase E-Class has just rolled off the production line in China, at the Mercedes-Benz Automotive Co., Ltd. (BBAC), located in Beijing, just where the previous model saw the light of day. The site has become the largest Mercedes-Benz car plant in the world!

The Mercedes-Benz – BAIC joint venture has celebrated its tenth year anniversary in 2015. Mercedes-Benz and the Chinese car makers have already announced more than half a billion euros in further expansion of the engine plant. 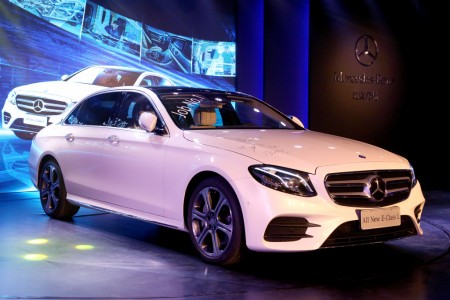 Approximately 250,000 vehicles were manufactured by the Chinese joint venture BBAC last year, with model ranges like the E-, the C-Class, the GLA and the GLC.

“The plant in Beijing is a key element in the flexible and efficient production network of Mercedes-Benz Cars. With the start of production of the new E-Class we are consistently pursuing our global growth strategy,” says Markus Schäfer, Member of the Divisional Board of Management Mercedes-Benz Cars, Production and Supply Chain Management.

The Chinese are keen on keeping the global high-quality level of the brand, yet providing for the needs of the local customers. For this, the ongoing transfer of knowledge between the competence center in Sindelfinger, Germany, and their colleagues in Beijing, has come a ong way. Experts from Germany have assisted the initial production stanges in China, making sure that every car rolling off the production line in Beijing complies with the luxury brand’s demands.

Peter Schabert, President and CEO of BBAC, says: “With the production of front- and rear-wheel-drive vehicles as well as engines, our team in Beijing shows its vast know-how, while demonstrating its flexibility. In terms of surface area, BBAC is already the largest Mercedes-Benz car plant in the world and we are ideally placed for further growth.”

Marking a milestone in autonomous driving, the long-wheelbase E-Class, just like its standard sibling, comes with features like the DRIVE PILOT, that can automatically keep the correct distance to vehicles in front and follow them at a speed up to 210 km/h. The vehicle offers assistance on braking and is able to automatically change lanes. 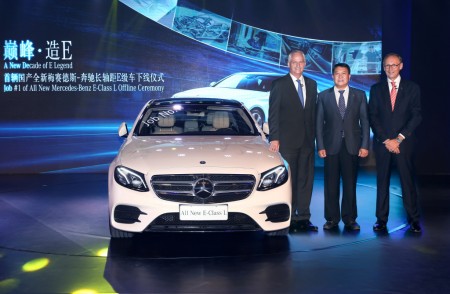 Naturally, the long E comes with extra space. At a wheelbase of 3079 millimeters and a total length of 5063 millimeters, the car “made in China for China” brings 140 millimeters of additional space, comfort and luxury. The rear occupants benefit from an extra of 134 millimeters of legroom, also facilitating the passenger entry and exit. The customers of the long E-Class are usually those who prefer to be chauffeured around cities.

232,453 units of the E-Class saloon and estate model were sold worldwide last year, making it the best-selling vehicle in the Mercedes-Benz history. The new long E is expected to further grow the sales figures in China.