The Hammer. That’s what they call it. Auto motor und sport tests the legendary Mercedes-AMG 300 CE 6.0 124 Coupé with a six-liter V8 engine and 385 hp on the Hockenheim race track.

With its intimidating force, such an AMG 300 CE 6.0 can shake even the most pronounced self-magnificence and seriously disrupt the day’s planning, so let’s first clarify what kind of car they call “The Hammer” in Affalterbach. It begins with the 124 series coupé, which debuted at the Geneva Motor Show in 1987 and quickly developed into a dream car for men who had long since left the voluptuousness and haste of youth behind them.

AMG engineers took the top model, the 300 CE, as the basis, but instead of its engine with 185 hp, three liters of displacement and six cylinders, the M 117, the 5.6-liter V8 from the 560 SEL, was installed, with AMG offering from 38,635 DM two options: 300 or 360 hp. Not enough? AMG offered a third option, too, for 59,605 DM, by expanding the displacement to six liters, modifying the four-valve cylinder head as well as making extensive “vehicle changes to install the engine”. 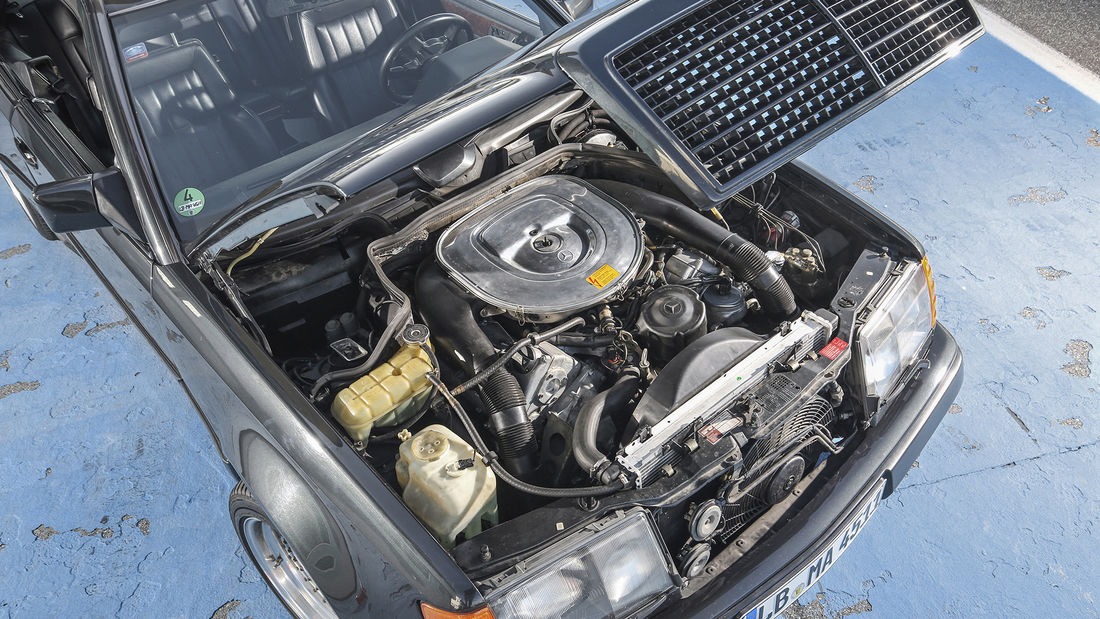 Meanwhile, the 300 CE 6.0 enriches the AMG fleet again and at the moment the noise level of Hockenheim. When driving over to the ring, the V8 sounds gloriously when the CE is pushed hard. The scale shows a weight of 1,695 kilos and despite the V8, only a light front axle load (53.3 percent). Off into the pit lane and into the interior made of precious wood. Install the measuring devices, turn the key while the V8 is idling in pounding staccato, pull the selector lever through the zigzag backdrop to D. The four-speed automatic has an economy and an S mode, which do not allow any influence on your shift strategy.

On to the track, first of all to find out that the speedometer is moving even faster than the force of the V8. And that its sound can dominate the background noise and animate it to maximum values. Now into the hairpin on the northern tip of the slope. There we start with the first acceleration, but there is a large amount of tire smoke and therefore the mantle of silence. More soulful, with less gas next time, so as not to overwhelm the poor grip reserves of the sprightly Hankook tires again. There is no traction control, only a 25 percent lock, but even so the rear-wheel-drive coupe laboriously grinds up to speed. Up to 100 km / h it takes a brave 6.2 seconds. It feels more powerful above this pace, as the V8 doesn’t really get going, it simply tours beyond the red area of ​​the rev counter until the pointer is on the 3 bar mark on the oil pressure gauge – should be around 7,200 in revolutions per minute. The hammer only drops at 289 km / h – not really, but …, you know. 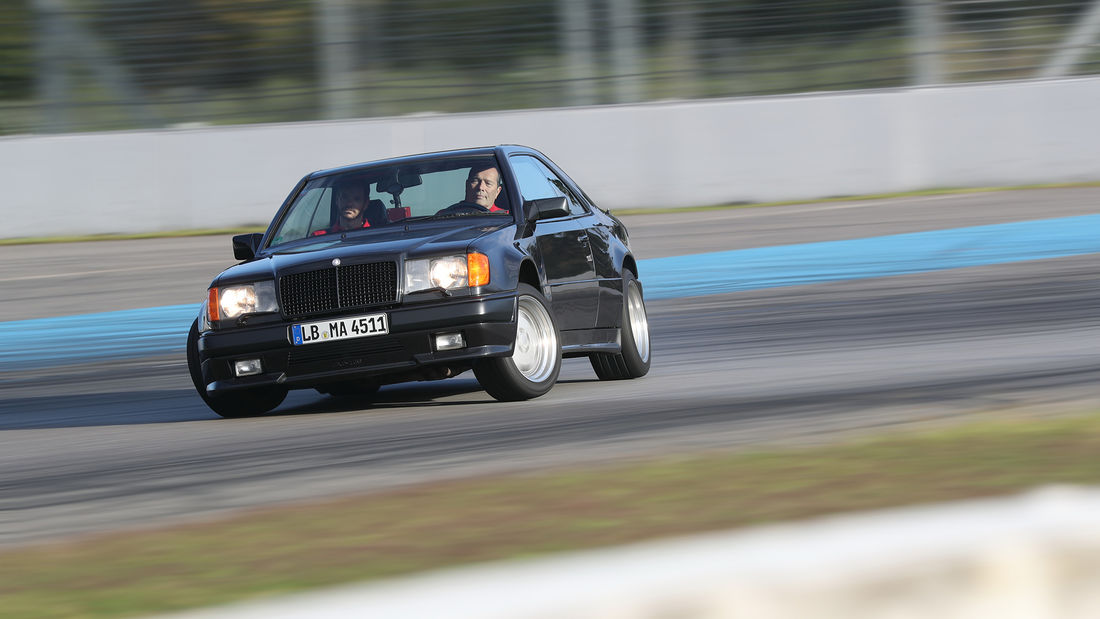 However, the brakes are not so well prepared for this. Everything is still going well, but with a deceleration of 9.46 m / s² the AMG needs 341 meters of braking distance from top speed to a standstill. A little foresight cannot hurt, as it also only requires a small amount of self-overestimation in order to turn the coupé oversteering into the green of the course.

The stiffness of the steering does not go hand in hand with high precision, everything is rather indifferent, but also non-toxic, even when changing lanes twice. The hammer sways through it with a clear side inclination. In general, curves are not its thing, preferring rather straight lines and gentle curves. Well, we know something: the high-speed oval in Boxberg!

That is right behind the seven hills and two motorway junctions. So we pack up in Hockenheim and set off. But first, we inform ourselves on the travel calculator. It looks like young Bill Gates programmed it in his garage in Albuquerque. In any case, the on-board computer calculates that the range after the measurement has already decreased to, well, close to the realm. So we let a great gurgle into the tank, decide to postpone the calculation of the consumption to another time (it should be 16 l / 100 km in the test section) and drive eastwards. 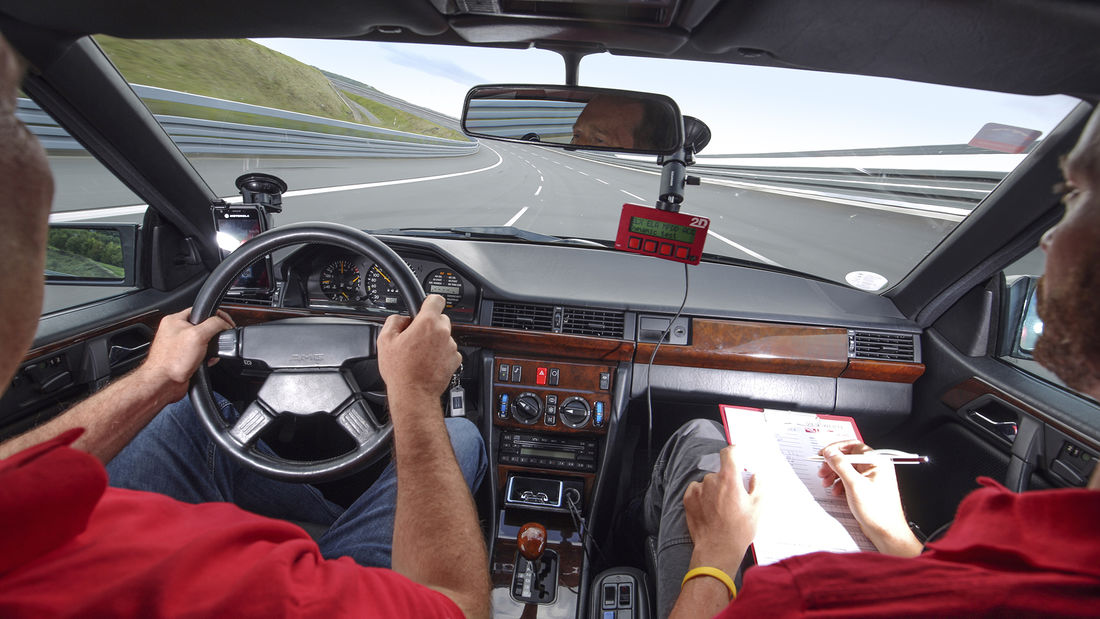 170 km/h is a comfortable travel pace. Since the V8 is not yet revving so high, fuel is still not drawing too much fuel from the tank. This leaves a refreshing reserve of range. This gives the trip a lot of fun, while there is no such thing as friendly about the comfort. With its hard tuning, the AMG coupe jostles over transverse joints and short bumps. On the other hand, they didn’t call him “cuddly kitten”, but “hammer”, which suggests a certain quick wit when dealing with bumps.

The small spoiler lip at the rear does not really push the AMG onto the asphalt, so at the end of the long straight line, accelerate for the last wide arches. Then out in Boxberg, twice right, three times left, and we’re there. At noon we have the three kilometer oval for ourselves. The 300 CE 6.0 centrifuges through the steep curves, which are up to 65 percent excessive, as if it wanted to catch up on its own sound. The Hammer still has the moves!