Give him one, he’ll know exactly what to do with it! After chasing the “Green Beast” through the “Green Hell”, Lewis Hamilton is now thinking about designing his very own special Mercedes-AMG GT R.

“When they first brought the AMG GT R to me I had all these ideas! I was talking to Tobias, “you’ve got all this F1 technology, and you’ve got the world champion driving your car, let’s do something together”, he told Top Gear, showing lack of modesty. Well, he is a 3-time world champion after all, so why pretend? Lewis Hamilton was the man who tamed the beast upon its world premiere last Friday, at Brookland, UK. 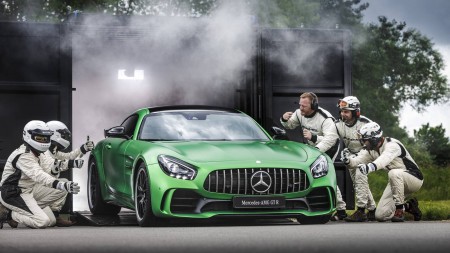 “At some stage I want to do my own car with them, like a GT LH or something like that. A limited edition series, which I can test, which I can setup, and which I can have a real hands-on approach with the design. When they eventually give me the budget to do so!”, Hamilton expressed his impatience right after stepping out of the 4.0-liter biturbo V8-powered street-legal fireball.

Apparently, the AMG executives are not as impatient as he is to give him full freedom to design the Lewis Hamilton special edition of the GT R. They are busy testing the convertible GT with a soft top, that is set to debut by the end of the year and to hit the road in early 2017.

But before that happens, watch world champion Lewis Hamilton driving the “Green Beast” and find out his first impression on it: