Meet Germany’s greenest diesel! For a quarter of a century, nature has recaptured this Mercedes W 123 300 D, abandoned at the egde of a lovely green forrest with an actual tree groing on its hood.

Famous for its reputation of being virtually undistructible, the beige W 123 Benz stood untouched in the countryside. But appearance is deceptive! Incredible: turning the key makes the W 123 get back to life and leave the green grave. Even after a long life, the heart beats. Strong, unmistakable. Because his engine is a manifesto!

The Mercedes-Benz W 123 model series saw the light of day in 1976 and rolled out of the production line until November 1985, with the Estate version being discontinued in January next year. 2.7 million cars were sold during the decade, with the standard wheelbase sedans being best sellers (2,375,440 cars). 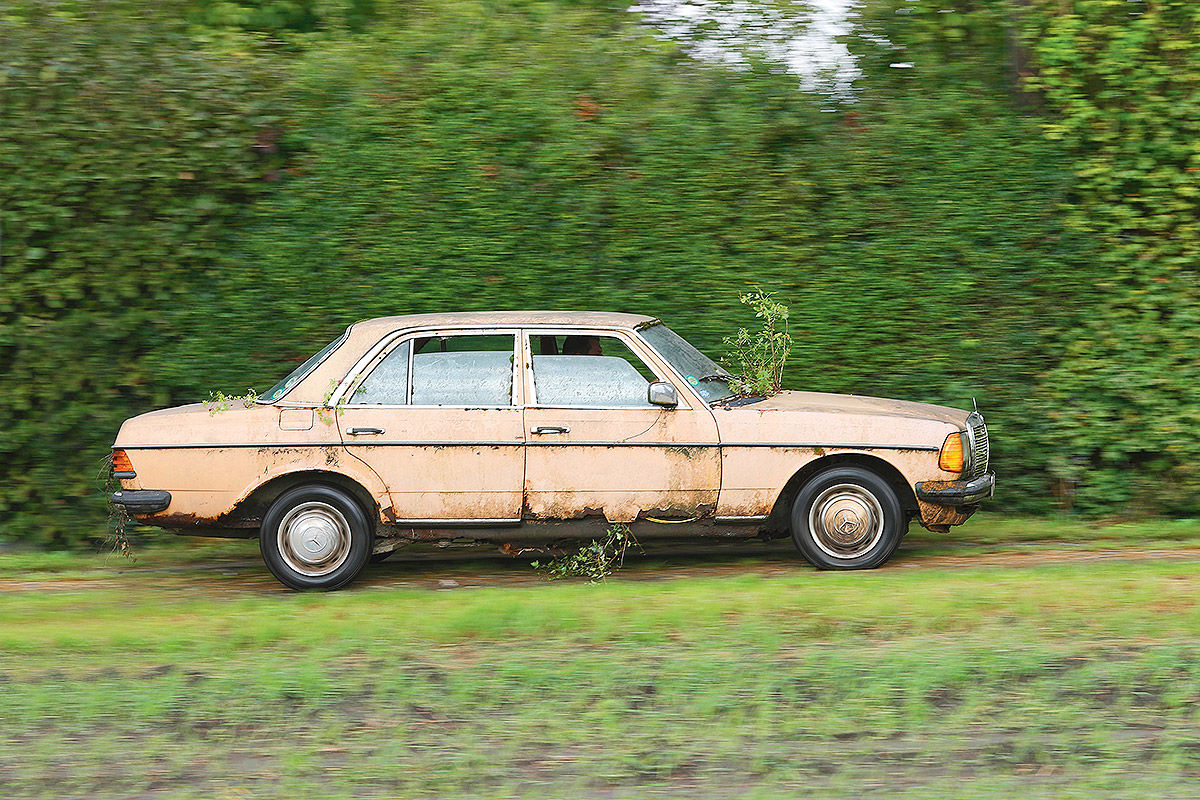 Today nearly 19,000 copies of the Mercedes mid-range W 123 series, built between 1976 and 1986, carry a H license plate, the second most popular car with historical approval in Germany. This barn find W 123 is not one of them though. The beige Benz is also a cultural asset, but not to the strict H-scale. But at least it is driving again.

Its current owner, Siggi Oberschewen, explains how the car became what it is today: “The previous owner wanted to sell the car 25 years ago, but he did not like the potential buyers, so he parked the Benz on his property under a tree, at the end of the field! ”

In the spring of 2017 his son Tim tried to sell another car, a DKW Munga, and the buyers noticed the overgrown Benz and they asked for the price. Two boxes of beer were invested, the deal sealed. “Such a diesel is indestructible, including the carburetor and injection system – it always runs,” says Oberschewen. He installed a fresh battery, flooded the atechambers with fresh diesel and the anxiously turned the ignition key. After a few seconds the five-cylinder in-line engine came back to life willingly! 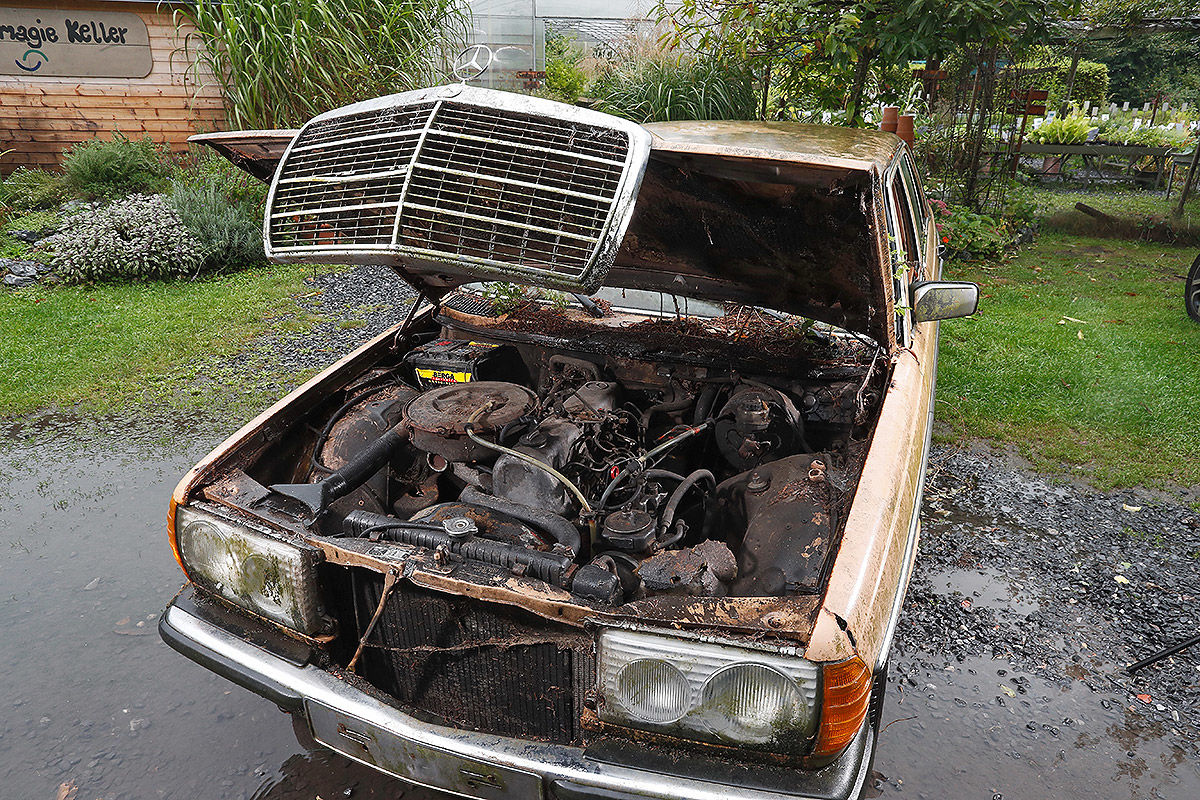 The Benz is a single biotope. In the seal of the trunk, as under the moldings, blossoming nature has secured a place. Ivy meanders through the interior. The most striking plants grow from the ventilation grille below the windshield. A tree even.

“After loading, I thought about how I can protect the little tree from being broken off by the wind during the drive home, and it’s all possible with a hog, lashed with straps,” says Siggi. You do not have to be a screwdriver master like the Oberschewens to realize that a restoration of the Mercedes is out of the question. 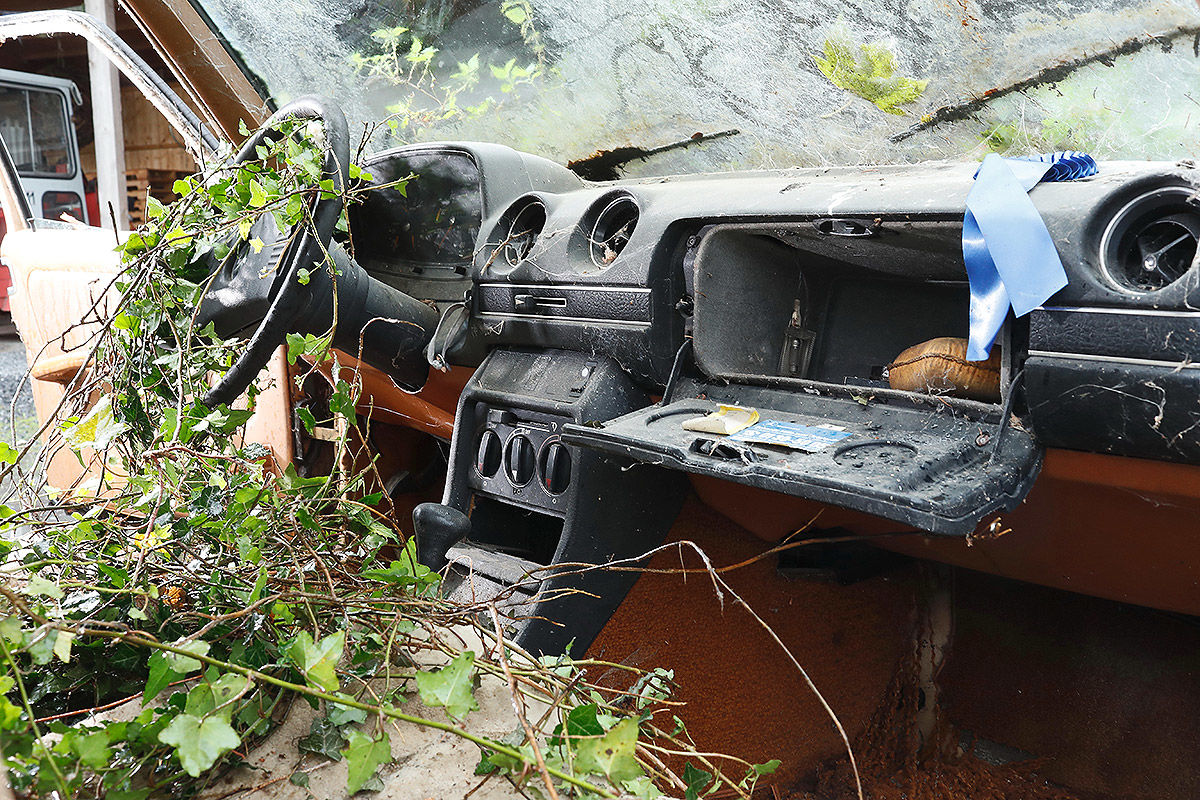 The new owners decided to keep the “Tree Benz” as they found it. For this purpose, they created a “wet cell” next to the home hall in Bochum. The soil is watered when needed to care for the plants on the car.

What will the future bring Germany’s greenest diesel? “Perhaps a promotional package from Mercedes, they would have to lick their fingers for this star! More proof of technical reliability is probably not,” says its owner.