With the world slamming the cars with high emissions, Mercedes-Benz is going into the opposite direction. The premium car company is working around the clock to build four Mercedes-Benz electric vehicles by 2020.

The decision comes after the German government announced its palns to offer sales subsidies on all electric vehicles priced at less than 60,000 euros. The Research and Development head, Thomas Weber, has been toying with the idea of building for new electric models by 2020, with the S-Class and the C-Class saloons being an inspiration for them.

Two sedans and two SUVs with zero emissions are expected to hit the market in less than four years from now, with details to mark them as no pollution vehicles. The new cars are set to put an ace up the Mercedes sleeve in their card games with Tesla Motors, that is already inching closer in the sales race. Rivals have also been forcing their way into the green zone, with Audi planning a production version of the e-tron quattro concept and with BMW making the best of their i3 and i8 super car.

Mercedes was planning to build the new Evs on the platforms of the already existing models. Yet, the high costs of development turn to be discouraging and impossible to fit the 60,000 euros maximum price imposed by the German goverment. The GLA, the C-Class, the S-Class and the GLC were temptive when it came to the base of the EVs, but the company will instead make use of the MEA (Modular Electric Architecture), an EV applications-orientated MRA platform. The GLC Fuel Cell, set to join the eco market in 2017, will be the first vehicle to use it. The MEA is a flexible platform, able to offer either rear-wheel drive or four-wheel drive. 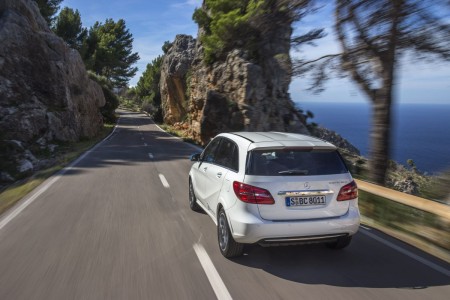 It is shown in a report by Autocar, the Research and Development center in Stuttgart has confirmed the company is already working on its own range of electric motors, with outputs ranging from 75 kW (101 bhp) ad 400 kW (536 bhp). A new generation of lithium-ion battery cells manufactured by Accumotive will supply the EVs with a range of more than 250 miles (approximately 400 km). Last March, Daimler announced its plans to invest half a million euro to expand its battery production in Germany.

With the B-Class Electric Drive already on the market and wih the smart fortwo and forfour electric on the way, the German car maker will add the four new EVs to the range and will have no less than 6 such cars by the end of the decade.

The zero emission cars are expected to be produced by the company’s plants in Germany: Rastatt, Bremen and Sindelfingen, while the newly modernized Hamburg plant, after getting the 500 million euros investment, will supply the new range of electric cars with components.