The first racing car Lewis Hamilton ever drove in Formula 1 sold for millions at an RM Sotheby’s auction this past weekend.

It is the first ever racing car that Lewis Hamilton drove to hit an auction block. It is a McLaren MP4-25 that the current Mercedes-AMG driver used during the 2010 season. The best ranking it achieved was a win in the Turkish Grand Prix. His then-teammate Jenson Button also drove it.

McLaren kept it stored away ever since. It only came out in 2019, when it underwent a restoration in the McLaren’s heritage department. Experts tore it down and inspected all safety-critical elements. They tested them and replaced what was necessary. They also delivered the engine to Mercedes and asked for a restore to factory standards. It was a 2.4-liter V8. 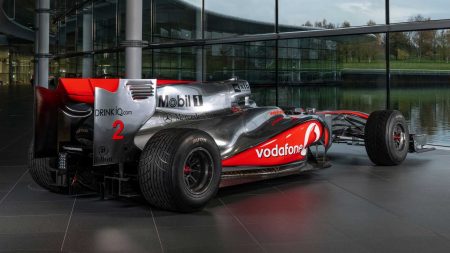 The model featured the so-called F-duct that allowed keeping the downforce-generating aerodynamics appendages for corners, yet cutting off some of the drag on straights. The system was rolled out eventually.

In 2013, Lewis Hamilton went on and signed with Mercedes-AMG Petronas. He won six titles in seven seasons with them, adding them to the one with McLaren from 2007.

The listing of RM Sotheby’s says that the car can still go around racetracks, as it still bears its certification. But, considering its age, no driver would feel any attraction to test his abilities and try to achieve record times with a decade-old racing car.

The bid for the racing car drove by Lewis Hamilton went in excess of 4,5 million pounds

The bid organized by RM Sotheby’s stopped at 4.73 million pounds, approximately $6.45 million. It isn’t though the highest price that a Formula 1 car ever reached. Back in 2017, Michael Schumacher’s Ferrari sold for $7.5 million. And the best is yet to come: Juan Manuel Fangio’s Mercedes from 1954 sold for almost $30 million in 2013.