Mercedes presented in this evening in world premiere at Stockholm the first member of the 100% electric powered EQ family. Here are the first official informations.

Two electric engines, one at each axle, 80 kWh battery

The Mercedes EQ C is powered by an asynchronous motor at each axle. The electric motor, a fixed-ratio transmission with a differential, the cooling system and the power electronics form a highly integrated, very compact unit.
The two engines are not similar. the front one is designed for the best efficiency in the low and medium range while the rear one offers more dynamism. The total output is 300 kW and maximum torque reach 765 Nm. 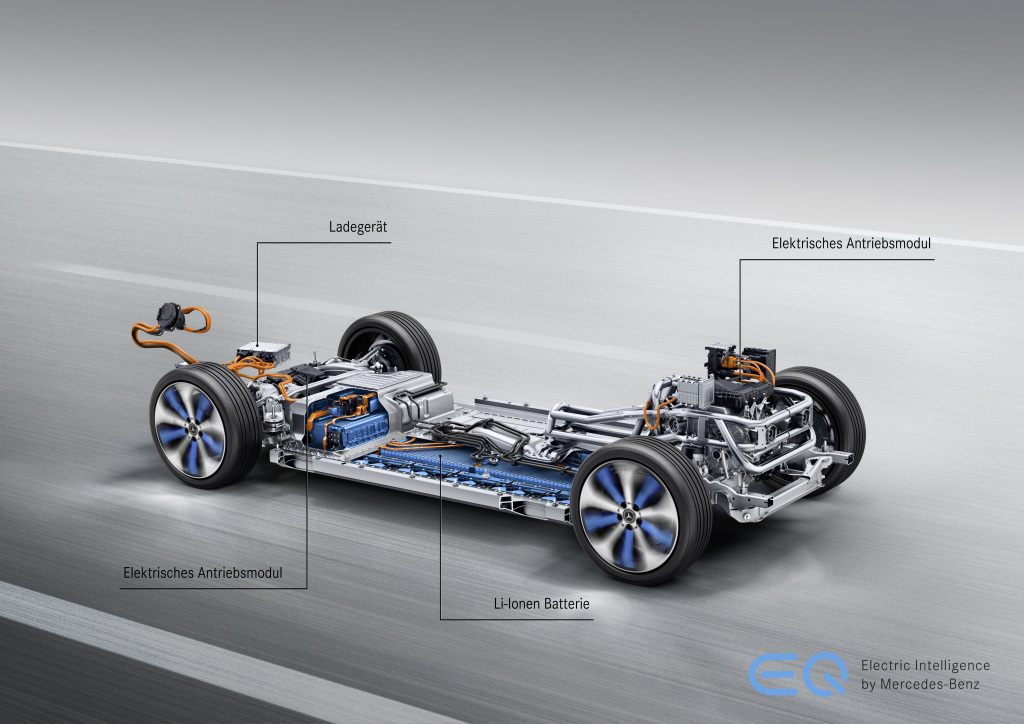 The Li-Ion battery has a bigger capacity than was announced in the concept car. It has 80 kWh, a maximum voltage of 408 V and a nominal capacity of 210 Ah. The battery consists of 384 cells and is located in the vehicle floor between the axles.

The battery system has a modular construction with two modules with 48 cells each and four modules with 72 cells each. As we estimate before, this modular configuration allow to develop different battery capacities in the future. 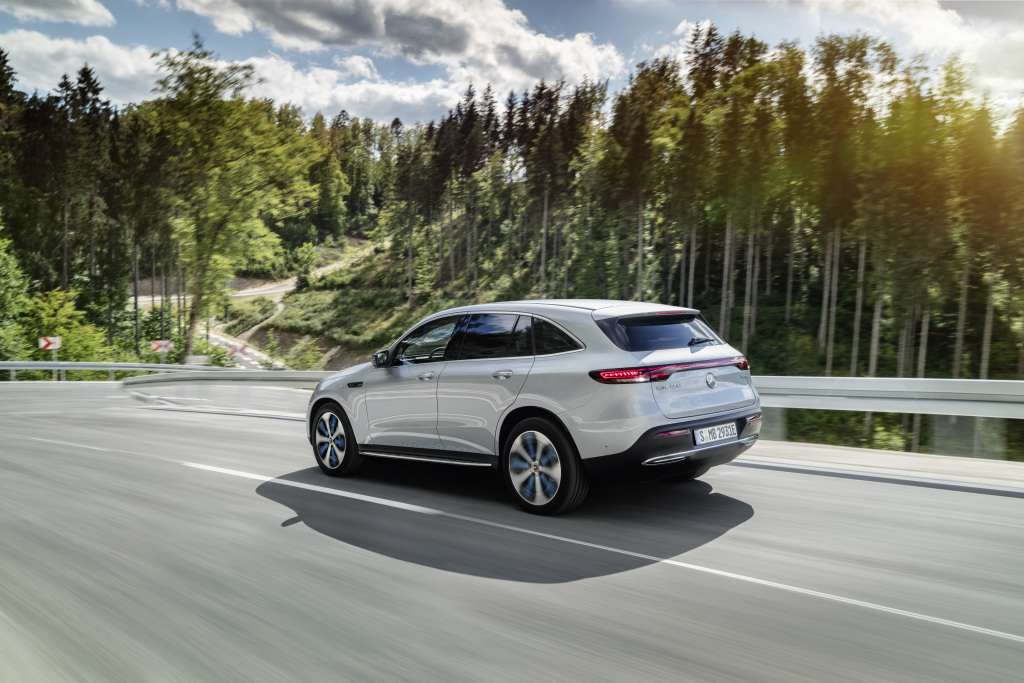 The EQC can be charged standard in two modes:
– at AC charging stations with a capacity of 7.4 kW, suitable for a wallbox at home
– at DC charging stations with a capacity of up to 110 kW (CCS standard in Europa and USA and CHAdeMO in Japan, China and UK).
Mercedes declare that the battery can be charged at a DC station from 10 to 80% in only 40 minutes.

Like other Mercedes models, the Mercedes EQC supports its driver with driving modes that have different characteristics: Comfort, Eco, Sport, Individual plus a dedicated program special for the EQC named Max range which help the driver to achieve the maximum possible range.

The dashboard has a similar layout with the new A-Class with two big screens of 10.25 each and the touchpad in  the central console which replace the controller from the E-Class or S-Class.
Compared with other Mercedes models the two big screens belongs to the standard equipment.
The menus are adapted to the electric propulsion. The instrument cluster has two dials: the left one for the speed and the right one for the output and recuperation phases. The charge status and range are placed under the left dial instrument which shows the speed.

The media display on the right side of the widescreen cockpit shows different settings like the charging current, departure time, energy flow and consumption histogram. The driver can access the menus of this displays also using the touchpad. The EQ optimised navigation  and Mercedes me functions plus the driving programs can be controlled via the media display.

Like in the other Mercedes models, the instrument cluster can be configurated in different ways:
– Modern Classic
– Sport
– Electric Arts

Mercedes position the Mercedes EQC as a crossover SUV and place it between an SUV and an SUV coupe.

The Multibeam LED headlamps are standard.

A striking feature at the front is the large black-panel surface enclosing the headlamps and grille. The black panel is bordered at the top by an optical fibre as a visual link between the torch like daytime running lamps. At night this creates an almost uninterrupted, horizontal light band. In some markets this night design  is supplemented with an illuminated central star. This optional extra has been combined with the radar sensor Active Distance Assist DISTRONIC for the first time, and acts as an additional position lamp for the stationary vehicle.

Other design features at the front include the air inlet with two chrome louvres in the lower area of the front apron and the simulated side air inlets in high-gloss black.

At the rear the sporty, stretched silhouette is finished off by a low roof spoiler. The roof contour and side window layout visually confirm that the EQC is conceived as a crossover SUV. The side windows are framed by high-gloss aluminum trip strips. The charging flap is integrated flush with the rear right side wall.

Roof rails have deliberately been omitted, preserving the clear, monolithic form and further enhancing aerodynamics.
The EQC is fitted with 19 to 21 inch wheels, while several new AMG wheel design in sizes betetween 20 and 21 inch are available.

You can see here the full press conference.