The delicate case of tuning a Mercedes-AMG S 63 Coupe

The standard Mercedes-AMG S 63 Coupe is caught in the middle between sportiness and comfort and I feel like this fragile balance is confusing tuners as well: “do I go with one or the other, or do I try to emphasize them both and probably fail miserably?”

The right answer would be: “if you want sporty, go look at the AMG GT and if you want comfort, find yourself a nice S-Class limousine, but leave the S 63 AMG Coupe as confused as it currently is, because that’s how we like it.” In true fairness, I think Mercedes-AMG managed to find that perfect balance between the two so that any intervention would simply tilt the scales one way or the other.

But that doesn’t mean everybody shares my impression. Oh, no.

And brightly coloured brake calipers? Come on, that’s the kind of thing hot hatch owners do because they (rightly) feel their (basically family) cars don’t have a sufficiently aggressive look. But yellow calipers on a Mercedes-AMG S 63 Coupe? That’s like putting racing stripes on a Rolls-Royce Phantom… 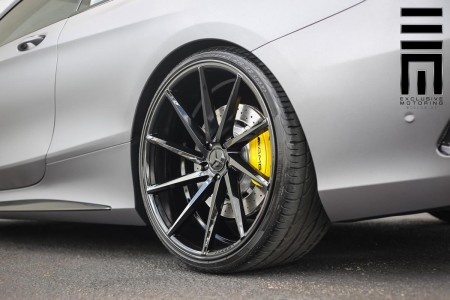 But I bet you like the wheels, don’t you? They’re finished in piano black, they’re made by Vossen Wheels and they’re probably bigger than your TV, so yeah, they look good. But you don’t see the car from the outside while you’re driving it, do you? And on the inside, be sure they make for a horrendous ride canceling any benefit you might have from the AIRMATIC suspension.

I might come of as a tuning-hater – I’m not, I just hate bad tuning. This is not the worst I’ve seen by far, but it’s still bad. And unnecessary.