With Halloween and the local Mexican celebration Dia de Muertos around the corner, the Formula 1 drivers have something extra to focus on. Before the Mexican Grand Prix, Red Bull’s Max Verstappen and Daniel Ricciardo showed up in front of the media wearing a scary make up.

Formula 1 has just turned spooky ahead of Halloween and Dia de Muertos (Day of the Dead) that will both happen on October 31st. Apparently, their intention is to instil terror in the Mercedes-AMG PETRONAS drivers. Hopefully, the 3-time world champion Lewis Hamilton and the championship leader Nico Rosberg know better. 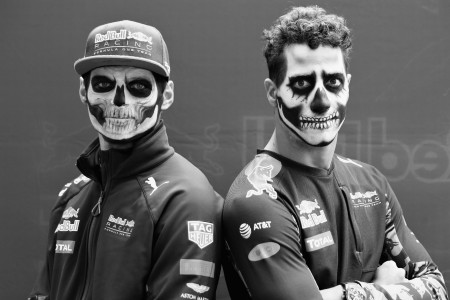 The Flying Dutch and the Aussie who drinks champagne from his shoe brightened up the mood at the Mexican racetrack, walking around the paddock with their faces looking like skulls. The make-up procedure took one whole hour of the time prior to the extra practice, the Red Bull drivers told. “Now I know how girls must feel every morning when they put on make-up”, Ricciardo confessed, smiling with an extra pair of teeth.

“I won’t be wearing this all weekend, it would be bad for my helmet”, 19-year old creepy looking Verstappen said.

With three races to go, Rosberg leads 26 points ahead of Hamilton. Ricciardo, who got his first victory in 2 years last month in Malaysia, comes in third.