The cars of Mad Max: Fury Road – Mercedes-Benz is there

It makes sense that in a post apocalyptic world, Mercedes-Benz cars would still be around – that’s exactly the case with the new film in the Mad Max franchise called Fury Road.

The movie is said to feature no less than 150 different cars, all based on existing models ranging from huge trucks to older american pick-ups or a Corvette Stingray. And, of course, a Mercedes-Benz 450 SEL.

If you’ve ever wondered what a 450 SEL truck would look like – and you most definitely haven’t – than this is your answer. You can thank Colin Gibson, the movie’s production designer and the man in charge with coming up with all these perverted ideas for all sorts of (once) innocent cars.

The Mercedes-Benz 450 SEL – or, at least, part of it – has made its way up on top of a very big rig that seems to sport a collection of front bumpers taken from equally large vehicles that are probably now defunct. 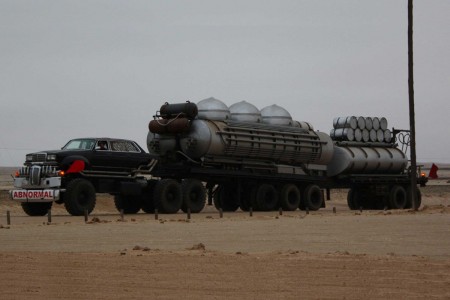 The Mad Max movies have always been about cars, and this new installment appears to carry this idea on. It’s enough to look at all these images to make you want to go see the film and, no matter how poor the script might turn out or how badly it might be acted (these are just suppositions, not a review since we haven’t seen it yet), I’m willing to bet you won’t regret it.

The Mercedes-Benz 450 SEL fuel truck seems to have a pretty important role, even though one of the spilled movie stills shows it in flames, so it’s safe to say it doesn’t make it to the end of the film.

Anyway, if you’re curios to see a Mercedes-Benz car like you’ve never seen it before surrounded by the kind of vehicles that would give a Volkswagen Beetle nightmares, then go see the movie. And don’t forget to tell us what you thought about it.

Watch out for that car that messes with your eyes – you know, the one that makes you think you’re seeing double. 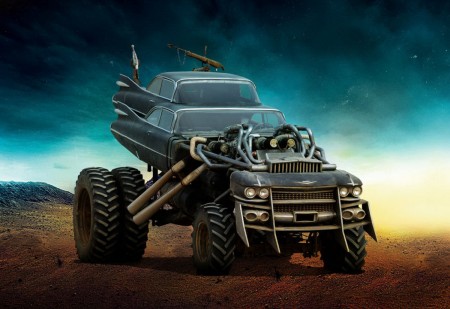