Elena Luchian, January 12, 2018
1.58K 0
Home Auto news The car that deserves it – Most spectacular installation for the world premiere of the new G-Class

Mercedes-Benz is doing this for the longest lasting model in the history of the company. The anticipation is grand, as the new G-Class is inching closer to its debut at the North American International Auto Show (NAIAS) in Detroit.

Three days before the world premiere, the Mercedes staff installed a gigantic amber-colored cube for which they used no less than 44,4 tons of synthetic resin right at the entrance of the Cobo Hall at the car show exhibition hall. 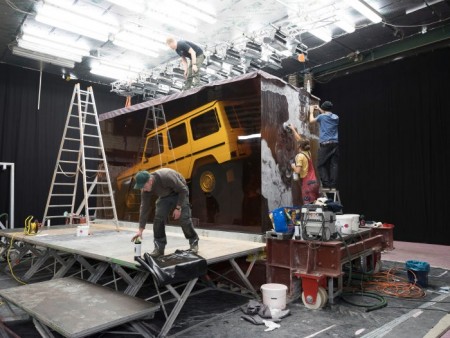 ALL ABOUT THE HISTORY OF THE G-CLASS, YEAR BY YEAR, IS RIGHT HERE:

The original civilian vehicle built back in 1979 is captive inside the cub, hinting to the idea that the timeless G has preserved its DNA all through history, just like amber pieces preserve insects or flowers, handing it over from one generation to another, with not much of a change in terms of design.

The 280 GE model from almost 4 decades ago is now enclosed in a square block that measures 5.50 meters in length, 2.55 meters in width and 3.10 meters in height. It took 90 days to make it, with the block growing daily by around 3 centimeters. Once the Detroit motor show is over, the cuboid will be on display in other markets for the launch of the off-roader. 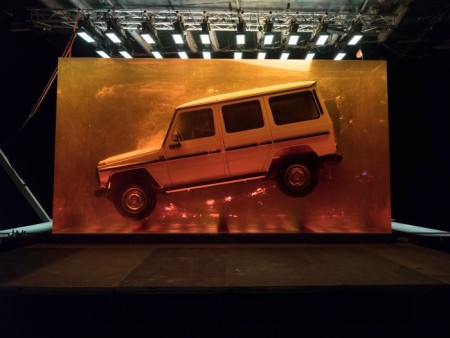 “The amber cube puts the uniqueness of the G-Class in a nutshell”, says Dr Gunnar Güthenke, Head of the Off-Road Vehicle product unit at Mercedes-Benz. “Our cult off-road vehicle has been continuously evolving for nearly 40 years – without losing its character or its core values. Its DNA is stronger than time and than any fashion trend. The cube expresses this to stunning effect and thus embodies the objective for advancing the G‑Class.”

The “Stronger Than Time” campaign has also been interpreted as a hint for the fans of the Jurassic Park series, as they are now expecting to see the boxy G in the new installment “Jurassic World: Fallen Kingdom” that hits the cinemas in June.