Vandalism – a willful or malicious damage or destruction of the property of another. That is what the dictionary says about property destruction. A brick prick in Drogheda, on the east coast of Ireland tried just that, but the outcome is simply hilarious.

The brick prick tried to steal the car, but apparently, there was no way he could do it. Instead, the thief got the memory of his life. And a scar to match all over his face. He threw a brick at the car, the brick bounced off the car and hit him back to teach him a lesson.

The thief-wannabe was instantly knocked out by the rebounding rock, that stroke him in the head.

After the failed attempt of breaking in, the brick prick was found lying in the street. But the owner of the car, Gerry Brady, who also owns a bar near by, thought he was just injured by mistake in a hit-and-run act. When he asked the assumed victim what had happened, he only lied he had been “attacked”, but refused to get medical help or call the police. 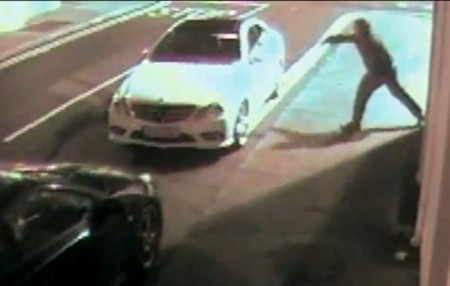 The paintwork of the new white Mercedes was badly damaged and there were few dents in the body of the car, but that was just all the thief could do.

After watching the hilarious video recorded by the surveillance camera, the owner of the car and of the bar decided to call the police. The authorities took the “Scarface” suspect in.

“’We have the whole thing on CCTV and it’s quite hilarious”, he says while he plans on taking his car to the service to fix it.