Compact SUV, powerful diesel engines, four-wheel drive. One of the most lucrative car recipes today. You might understand then the heated battle between the all-new BMW X1, the Mercedes GLA with the new adaptive chassis and the slightly rejuvenated Range Rover Evoque with its new Ingenium engine. The fight is on in our latest comparison test.

Selling an SUV these days is as easy as giving a fat, cute little child cotton candy. Add the premium tag and you’ve got the perfect recipe for today’s day and age. Customers love their glitzy high-seated SUVs and the carmakers can get them out of the door fast enough.

In the compact premium segment things were pretty clear. Until recently. Born in 2009 with the advent of the BMW X1, the niche has seen an unprecedented boom in the following years. Range Rover and Mercedes joined the party two and four years later with the Evoque and the GLA, respectively.

But the clock is ticking and changes are of the essence. Criticized in the past for its cramped interior and improvised styling, the X1 has now been reinvented, getting the front-wheel drive biased arhicture of the 2-Series Active Tourer and with it the very space and modularity it lacked so dearly. Mercedes and Range Rover have also renewed their best-sellers: GLA was given the option of an adaptive chassis, while the Briton has received an all-new and high-tech 2.0-liter diesel engine from the Ingenium family, coupled to an equally new nine-speed automatic transmission. But is it enough to stand up against the all-new X1? 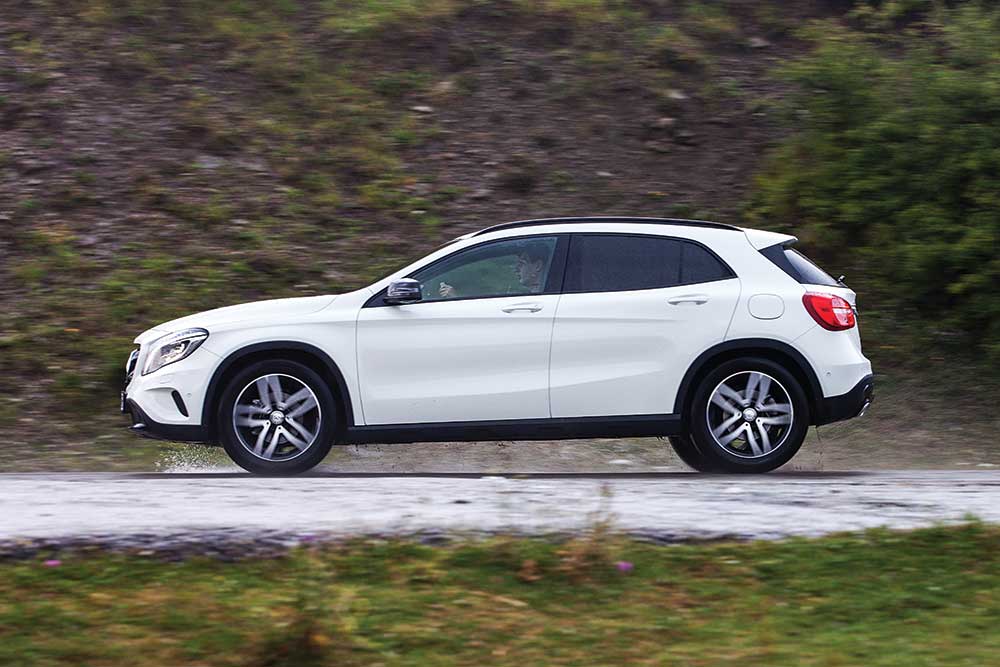 The GLA is now finally a true Mercedes, making less concessions in terms of comfort, thanks to the Adaptive dampers (1.237 euro) and standard Dynamic Select (four driving modes for the engine, transmission, steering and if specified the chassis) which helps the suspension soak up long bumps without major distortions. Faced with short, succesive bumps, though, the GLA finally starts to show its limitations and prove no equal for the X1.

Crouching lower towards the tarmac, the German crossover certainly puts its emphasis on design and the sporty side of life. This is evident in motion too, as the GLA presents itself as a surprisingly lively, quick athlete, blessed with a well responsive steering and no exaggerate tendency to bluntly relent into understeer. This brings us back to the proverbial driving pleasure, something BMW was known to cater for. Especially as the GLA tips the scales 20 kilos lower than the X1.

The interior is sporting the same rather cumbersome operating multimedia system (Audio 20 with 7 inch screen as standard, navigation extra 595 euro) and small interior. The dark ambiance certainly doesn’t help dismiss the claustrophobic feeling induced by the tight room on both the front and the back seats, even if in real terms the Evoque is the smallest in the knee department and the X1 is in fact last when head room is taken into consideration. And the lack of space only gets more evident when you realize the luggage compartment is also the most modest in this trio. Sporty design takes its toll!

The engine of the GLA 220 d don’t quite live up to the hype either. The 2.1-liter diesel with 177 hp and 350 Nm doesn’t get along very well with the seven-speed dual-clutch transmission, feeling less powerful and determined than it ought to – and especially compared to the more powerful X1 20d. The small lever hidden behind the steering wheel is also rather impractical. Mercedes makes up for all of this with its remarkably low 4.8 l/100 km mixed fuel consumption. 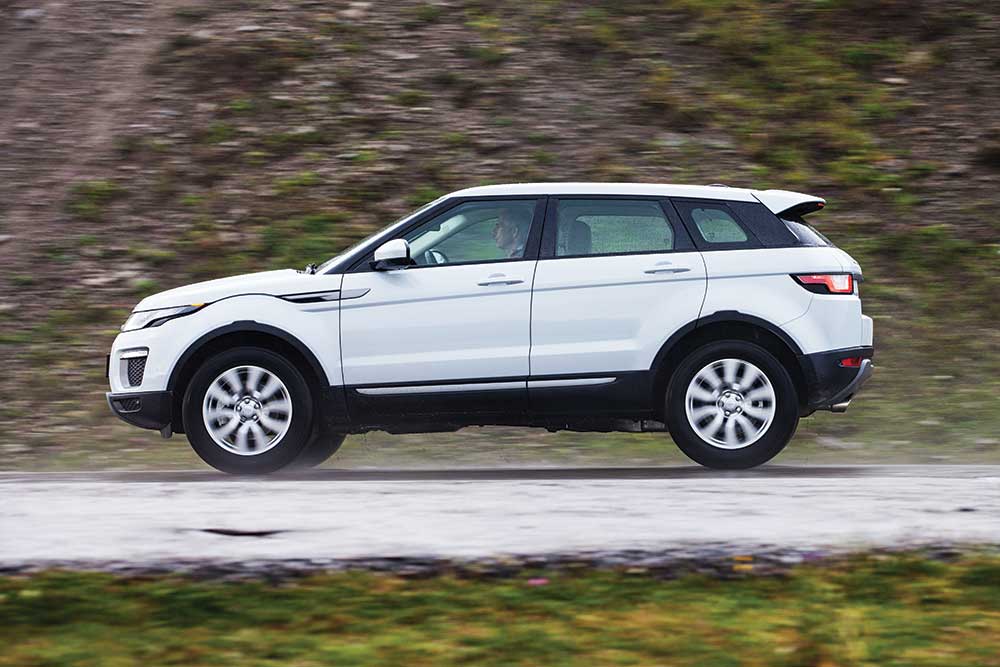 Oh, that defiant shape with its high-sided window line and the flat roof. Unmistakably a Range Rover trademark. Thus, the recent facelift has only delicately retouched the bumpers, grille and lights. But it is precisely this eccentric styling with the sloping roof that cost the Evoque precious points in the space chapter, since behind it clearly offers the smallest knee room.

Equally unconvincing is the standard Infotainment system InControl (already available in the Jaguar XE ) with eight-inch touchscreen, smartphone integration and real-time congestion warning that leaves a lot to be wished both in therms of operation and map display. The luggage compartment is also rather small, trumping only the minuscule GLA in this regard.

Still, the biggest news of the facelift campaign clearly concerns the brand new aluminum-clad diesel engine found under the Evoque’s bonnet. Labeled Ingenium, it is a quite sophisticated and far more economical engine than its 2.2-liter predecessor with 190 hp (5.1 instead of 5.7 l/100 km). But and this is a big but, the Evoque still consumes far more than its rivals and is the least sporty here. The nine-speed automatic switches sometimes too slow, and the 200 kilos weight penalty also dampen the handling. Push the Range Rover Evoque in curves early and the front wheels start to squeal… with hardly a very natural feeling. The supple suspension is better suited to the cruising mode. Just sit back and relax on the large, comfortable leather seats in the stylish, high-quality ambience.

Thankfully, Evoque is still king in the off-road department. Unlike the BMW X1 and the Mercedes GLA whose all-wheel drive is designed primarily as a traction aid in winter, the Range Rover Evoque 4WD system is also up to longer trips on difficult terrain. In addition to greatest ground clearance and largest angle of approach and departure, the Evoque also gets the well-known All-terrain Progress Control system which facilitates progress on difficult passages by optimizing traction in four stages (Normal, Snow, Mud, Sand) and offers the novelty of All-Terraing Progress Control downhill aid which now keeps the car automatically uphill in reverse as well (as opposed to the already known and standard Hill Descent Control), between 1.8 and 30 km / h. 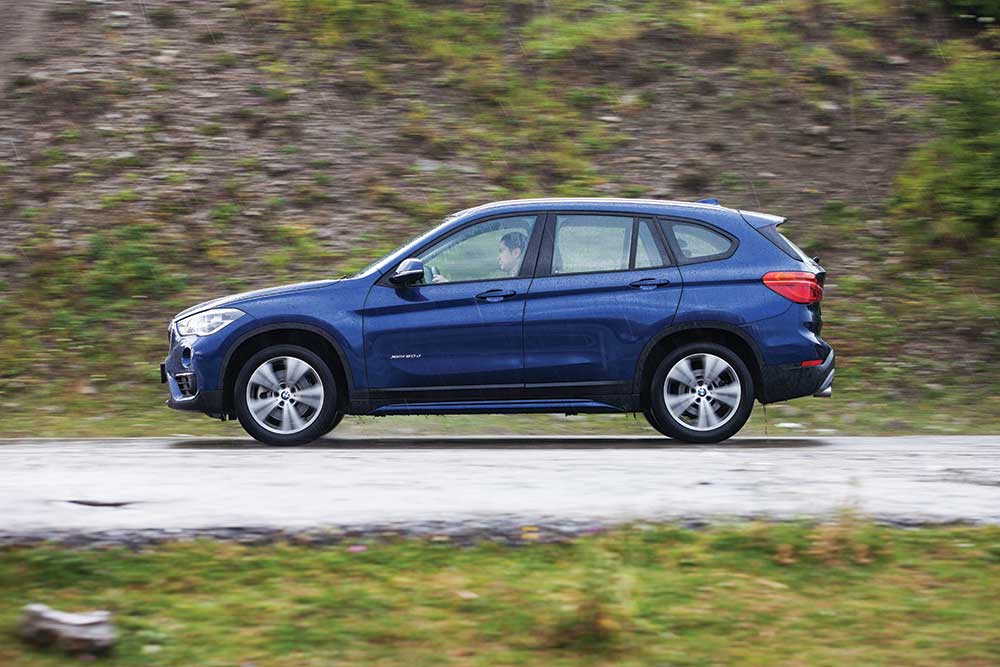 X1, the versatility champion? That’s new! The new X1 makes the leap to the UKL front-wheel drive architecture, complete with transverse engines. At approximately the same external dimensions, it offers more interior and boot space than before, an airy feeling of space with acceptable clarity and an (356 euro) extra variability twist in the shape of a longitudinally adjustable rear bench. Headroom is the smallest here, though, but the luggage has no rival.

Equally good is the strong and refined turbodiesel under the bonnet. Teamed up with the fast switching eight-speed automatic it turns willingly to 5,000 / min and provides the best performance in this test, pulling with great aplomb at any rpm. Surprisingly enough, as economical as the X1 might be, the GLA is in fact the more frugal car here.

Instrumentation and ergonomics are as good as ever with iDrive still the benchmark. The same can be said about the handling talents. The BMW X1 also proved clearly the fastest, most agile SUV here, behaving neutrally and pushing the limits of traction only marginally. Understeer is only moderate, despite the front-biased traction with the xDrive system capable of sending as much as 100% of the torque to rear-wheels in certain circumstances. X1 steers very direct and agile, only slowed by the high center of gravity when compared to the flatter GLA. Which is 20 kg lighter, as a matter of fact. X1 impresses with its good comfort, BMW clearly finding the perfect balance between firmness and softness. 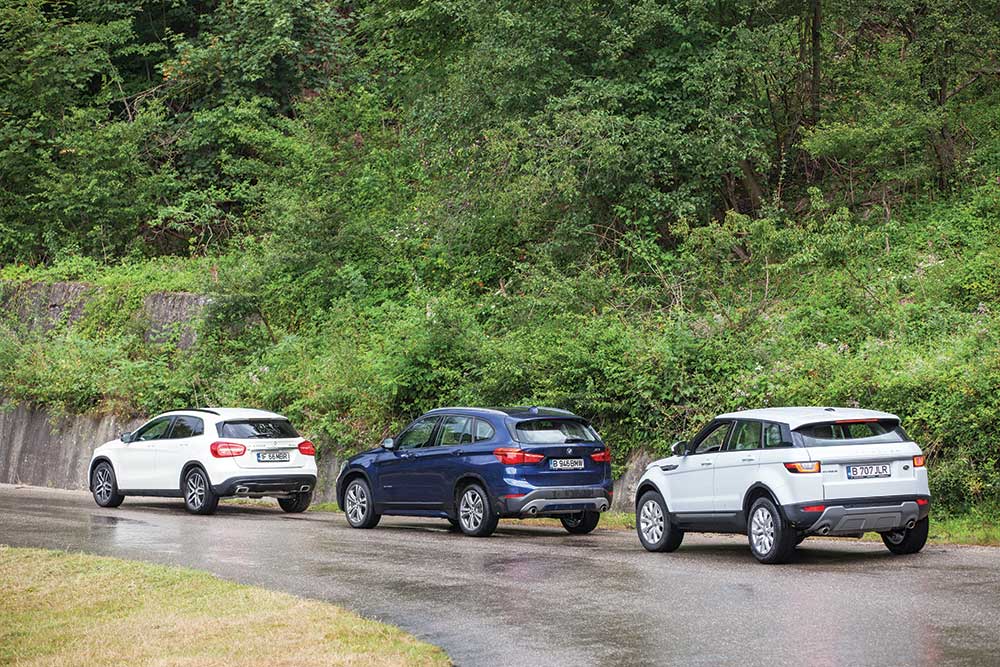 The most economic engine and the solid workmanship are befit of the Mercedes badge. The meager space and still rigid chassis is not. Nevertheless, the Mercedes GLA (2nd place) somehow discovers the unexpected virtue of youthful dynamism – almost beating the BMW at its own game. Still, this was not enough to ensure its victory overall, as the BMW X1 overtakes it (1st place) particularly on the merits of its much more spacious, more practical body and its sovereign engine and dynamic talents. Despite its singular off-road credentials and sexy styling, the posh Range Rover Evoque only comes third. The slightly updated design and the new engine do keep it alive, but the highest consumption and the soft nature, coupled with the highest price, don’t help it trump its rivals.