Mercedes-Benz has unleashed the beast! The G500 4×4² is out racing wild cats and throwing rocks into the camera! Watch the first ever video of the car that looks like it can pull out just about any trick!

How far can this go? Well… the question is how far can you go?

The follow up of the Mercedes-Benz 6×6, the G500 4×4² makes first appearance in motion before its official debut at the Geneva Motor Show next March, in a show-stopping video.

Coming out of what looks like a gold mine, all golden and shiny, and bothering the puma in some bedrock alien world, the vicious sounding engine in the bright yellow G unleashes 416 HP and 610 Nm of torque along never before crossed steep paths, devouring stone by stone, inch by inch. 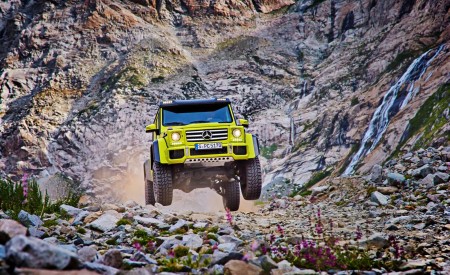 Getting its feet (22-inch wheels) wet and covering its solar paint in mud, the G500 4×4² makes a U-turn and a splash in a river where, rocks and vegetation are no obstacle for the three lock differentials. All naturally cleaned up by the river flow, the G500 4×4² makes its way into the city and makes a statement: I am both for the off-road labour and for the city beat. 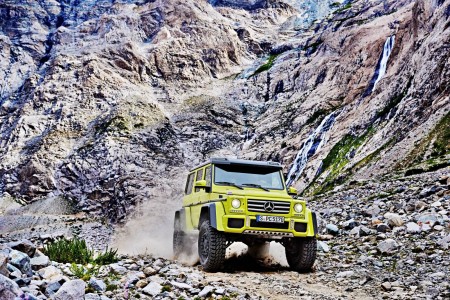 Leaving no room for vulnerability, the car is a fortress on wheels, that does not need to do much to get some attention. It only needs to show up. You can tell by the looks that “impossible” converts into a possibility behind its wheel. And speaking of attention, the sales expectations are huge, as there is already a big demand for it in the Middle East, Russia and the United States. What began as a marketing game to celebrate the 35th anniversary of the G-Class, turned out to be quite a business. 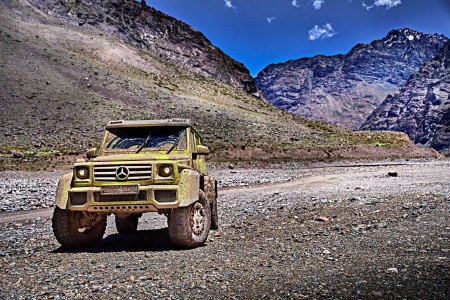 This May, Mercedes-Benz will cease production for its big brother, the G63 AMG 6×6.