The “Count Trossi” Mercedes-Benz SSK was designated “Best in Show” at Lime Rock, where the Park Concours of the Historic Festival 33 took place.

The Mercedes SSK owned by none other than the world famous fashion designer Ralph Lauren, was selected out of 264 competitors in 29 classes.

“It is truly a work of art”, said festival organizer Murray Smith.

It is obviously not the first time the all-black bat finds itself in the limelight. At the 1993 Pebble Beach Concours the SSK came away with the top prize, Best of Show, then did the same at the 2007 Villa d’Este Concours in Italy.

Although only 42 such SSKs (Super Sport Kurtz) were built for racing, with six-inline engines, few originals exist today.

The car got its name from the Italian Count Carlo Felice Trossi, the one who commissioned its new coachwork back in 1934. Initially sent to Tokyo in February 1930, the chassis didn’t sell and was returned to Mercedes later that year. It next went to Mercedes’ Italian Sales Agent, Carlo Saporiti in Milan, where it was fitted with a body by Touring and raced by its first owner. Trossi also competed in the SSK after he bought it, but then in 1932 sketched an idea for a new body on a simple piece of paper. An obscure American stylist by the name of Willie White is thought to have been responsible for the way it looks today. 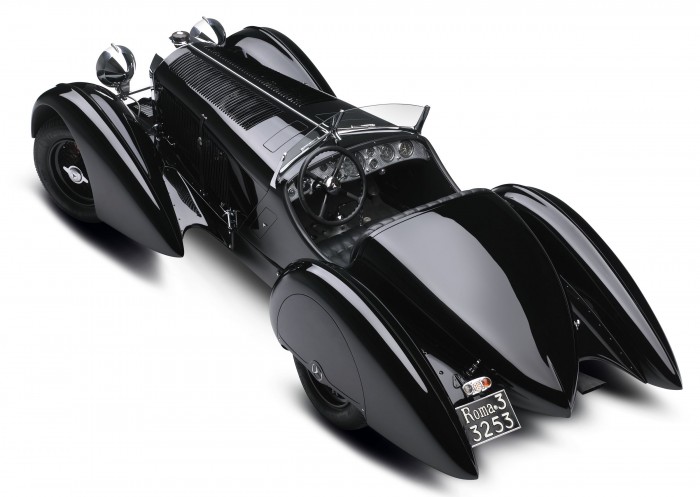 After Ralph Lauren acquired the Trossi SSK, he had it resorted by Paul Russell, considered one of the best in the business.

To win the “Best in Show” trophy in Lime Rock, the Mercedes-Benz “Count Trossi” SSK defeated fellow Mercedes vehicles like the 1955 300 SLR “722” driven by Sir Stirling Moss to victory in the 1955 Mille Miglia, and a 1955 W196 Grand Prix Silver Arrow, shown by the Mercedes-Benz Classic Center in Germany.