Forty years have passed since Mercedes-Benz and Bosch presented the anti-lock braking system in Uterkheim, from 22nd to 25th of August 1978. Thus the ABS system was available as a world premiere in the then-new S-Class (model series 116) starting with the end of 1978.

The system was especially fitted in the car to maintain steering even under emergency braking and avoid wheels locking. The system was developed by Mercedes-Benz and Bosch and it was introduced 40 years ago exactly, on the test track at the Daimler-Benz plant in Untertürkheim.

A brochure from four decades ago explained the principle of the ABS:  “The anti-lock braking system uses a computer to monitor the change in rotational speed of each wheel during braking. If the speed slows too quickly (such as when braking on a slippery surface) and the wheel risks locking, the computer automatically reduces the brake pressure. The wheel accelerates again and the brake pressure is increased again, thereby braking the wheel. This process is repeated several times in a matter of seconds”. 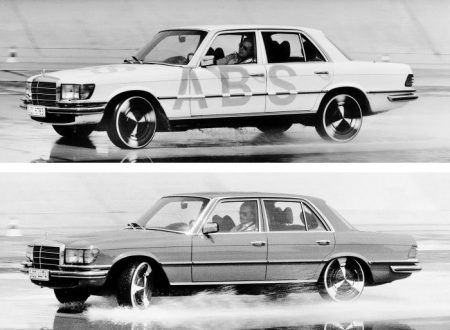 Even dealing with wet, icy, snowy surfaces, the ABS delivered the maximum physically possible braking force, keeping the vehicle steerable at any time.

The ABS made its debut with the Mercedes-Benz S-Class (model series 116) by the end of 1979. It was, at that time, an optional extra, coming for a price of 2,217.60 Deutsch Marks. Two years later, it became optionally available in every passenger car with the star. By 1981, the commercial vehicles received the system as well. Eleven years later, the ABS was to be standard equipment for all the Mercedes-Benz vehicles. Today, the ABS is standard equipment for all cars worldwide. 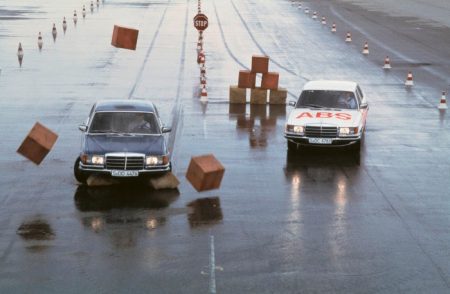 But the history of the assistance system dates way back. In 1953, Hans Scherenberg, then head of design at Mercedes-Benz, applied for a patent on a system to stop a vehicle’s wheels locking under braking. A decade later, the Advance Development department started working on an electronic-hydraulic brake control system. In 1966, the company began collaborating with the Heidelberg electronics specialist Teldix, which was later taken over by Bosch. It was then the beginning of the ABS that we know.

New systems such as Acceleration Skid Control (1985), Electronic Stability Program ESP® (1995), Brake Assist System BAS (1996) and adaptive cruise control DISTRONIC (1998) followed, based on sensors and radars. They all opened the gate for the PRE-SAFE® preventive safety system of today.