The 4-door Mercedes-AMG GT will be presented at the Geneva Motor Show next March. The confirmation comes right from the head of the Affalterbach-based house, Tobias Moers, in a media statement for the Autocar magazine. The high-performance sedan shall feature quite an impressive output of 816 horsepower!

We are bound to finally see the car that Mercedes has been working on for the past two years: a 4-door coupe with sporty DNA, the bigger and stronger brother of the AMG GT presented in Paris, back in 2014. The prototypes caught testing have already confirmed that AMG is working on a new model, whose concept has been displayed last year, also in Geneva. 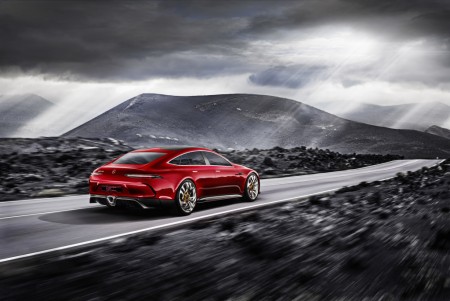 The 4-door Mercedes-AMG GT, that was initially thought to be called “GT4”, a rival for the very potent Porsche Panamera, shall be set in motion by a new hybrid system, that integrated the company’s 4.0-liter V8 twin-turbo and an electric motor. The assembly shall provide the car with no less than 816 horsepower. The performance house shall set in the car an automatic 9-speed AMG SPEEDSHIFT transmission and a 4MATIC+ all-wheel drive. The fireball shall benefit from an electric range of 50 kilometers. AMG will receive assistance from the Formula E squad for developing the drive train.

YOU MAY BE INTERESTING IN HITTING THIS PAGE: