The 2015 after-game for Mercedes-AMG

After a quite troublesome start of the season for the teams competing with Mercedes-AMG models, the double round in Norisring brought back sunny days in Stuttgart. Saturday was the day of the hopeful Pascal Wehrlein and on Sunday, the day of the more proficient Canadian Robert Wickens. Could this be the cold shower Mercedes-AMG needed?

Norisring is a circuit Audi always felt comfortable on, somehow playing the host part. Considering the way the season had run so far and we can claim without being afraid of making any mistake that it was at Audi’s nod, BMW and Mercedes-AMG were coming to Nuremberg with trembling knees. Apparently, because what was on paper was completely confused by a great qualifying session run by Mercedes-AMG. They had the savior of the season so far in Christian Vietoris, getting a pole position by a whisker, ahead of Gary Paffett. Audi placed Jamie Green in the third spot, while the BMW honor was saved by the congenial Brazilian Augusto Farfus. Audi was foreshadowing a potential failure in Norisring from the very qualifying session, when half of their cars were rounding up the starting grid, getting the worst four times of the session. 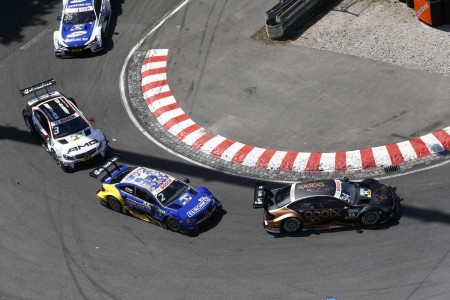 Race number one, on Saturday, started off after a short rain that called a red code alert on the engineers. The unexpected shower sent some of the drivers starting on slick tyres and other on the rain ones. This is where Pascal Wehrlein cuts in and especially his race engineer’s hunch. The Mercedes-AMG driver admitted after finishing the race that the man in the pit must be completely credited for the strategy. Even though he did not have the best of starts and the first laps he ran on damp asphalt were more of an attempt of keeping the car on track, as the drive surface became aired, Wehrlein and the other drivers who were well enough inspired to take their chances (the champion Marco Wittman and the temporary leader of the 2015 season, Jamie Green, were among them), were starting to feel the effects of it. 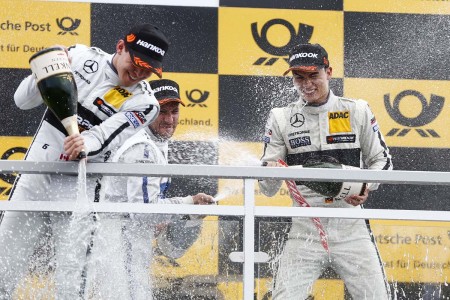 Around the tierce of the race, pitting started, so the drivers switched to slicks and the favored ones were those who had started on tyres for drive surface in the first place. Pascal Wehrlein gradually got rid of Robert Wickens, Gary Paffett (there had already been a fine combat between the two of them), but also of Christian Vietoris. 46 were run in total and the young Pascal proved a great champion-like backbone, kept focus and was the first to cross the finish line. A huge breath of fresh air for Mercedes-AMG. More than that, the podium was rounded up by “stars”, with Wickens and Paffett getting in the possession of the bottles of champagne. 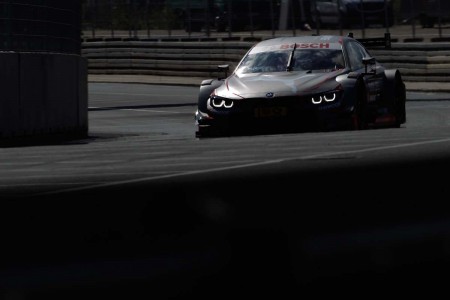 It was a disillusioning race for Audi, the only credit also going to Jamie Green, who upheld his reputation and finished seventh (of course, his pedigree does not indicate him as 7th place driver, but gives him the right to be considered the most effective Audi driver in the 2015 season). BMW barely mattered, too little for a constructor that brought home the DTM title a year before. Bruno Spengler was the only one to uphold his pride and flopped for the fifth final position.

All in all, the first race in Norisring spiced up the championship. And shook up the people in Audi, who were in the zone in the first four rounds and gave Mercedes-AMG some trust in their potential. BMW were the only ones to keep the same 2015 pace – a mediocre one, unfortunately… 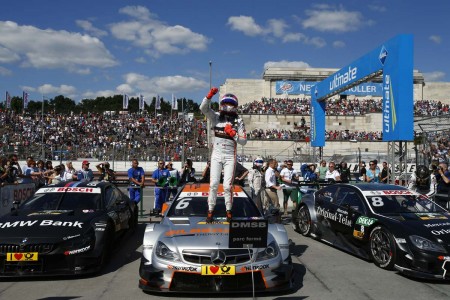 Sunday and the second race in Norisring seemed place under the sign of Bruno Spengler. The Canadian revitalized the BMW pits and got a pole that maybe not even the most ardent fans of the Bavarians would have not dared to hope for. This is how the flags with the maple leaf swiftly came to life, hoping for a victory, a brand new surprise like in the Saturday race, when Mercedes-AMG practically came out of nowhere.

Spengler started off well in the race and placed himself in the leading position. It was just that the Mercedes-AMG Robert Wickens and Christian Vietoris were already taking advantage of the great weekend and putting pressure on the BMW’s Canadian’s shoulder. The fateful lap was number 13, when Bruno, 2012 DTM champion, was overtaken by no less than four drivers – Wickens, Vietoris, Lucas Auer (Mercedes-AMG) and Mattias Ekstrom (Audi). 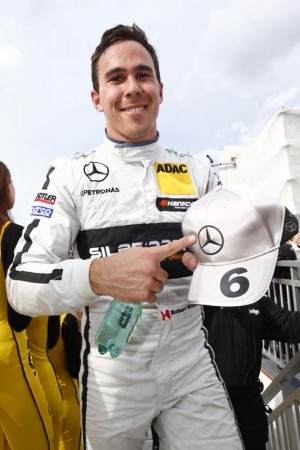 The good part of it was the fact that the Canadian fans did not need to put flags down, as one of theirs, Wickens, took the lead and commanded the pace. And Robert, after Saturday’s fine race, that he finished second, went flawlessly straight to a new career victory. Vietoris kept close and finished second, a Mercedes-AMG double, that surely led to consistent bonuses for those responsible of the DTM program in Stuttgart. A fine combat between especially proficient drivers in the DTM, the champions, was also led by Mattias Ekstrom and Bruno Spengler. The Canadian put out all the tricks in the hat and managed to pass the Swedish. For the first BMW podium in the 2015 season. A statement that must have seemed speculative by the beginning of the year, which, after six rounds, mirrors the sad gospel truth. 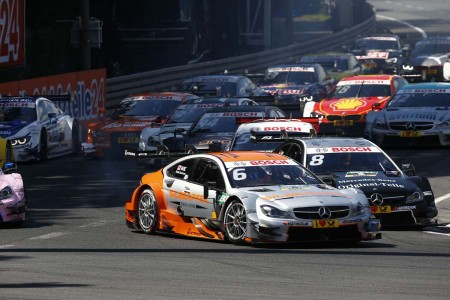 Jamie Green finished the weekend far away from being good, outside the scoring points area. From commanding the overall ranking, the poor round for Audi also meant a tightening of the situation at the top. The question standing after this weekend is whether Audi had a simple fallout or whether the people in Mercedes-Benz woke up before too late and started to push it. Somehow, there are no questions about BMW. And this can’t possibly be good for the DTM show…