Is it a T-Modell? Is it an SUV? Why does it seem so much of a limousine on the inside? Why so many questions though? One thing is clear. It is a Mercedes. And it breathes the air of the three-pointed star through all its pores. The Mercedes-Benz E-Class All-Terrain was designed to be the tough guy in the off-road and the gentleman on the road. But how much of an SUV is in this E-Class? We started on a road trip to find out!

The E-Class was already a big happy family, full of vitamin E that made a revolution in their segment with their high-end assitance systems and autonomous driving features. The head of the family is the sedan presented in Detroit in January 2016, followed by a T-Modell, by a Coupe and a Convertible. Now here comes the off-road-designed E, pretty much escaping from the territory of the G, together with its derivatives, the GLC and the GLE, once it was presented in Paris, last fall. The perfect rival for the Audi A6 Allroad and the Volvo V90 Cross Country, the All-Terrain from Mercedes is the high-ride T-Modell with plastic protections on fenders, all-wheel drive, Air Body Control pneumatic suspension, all offered as standard. 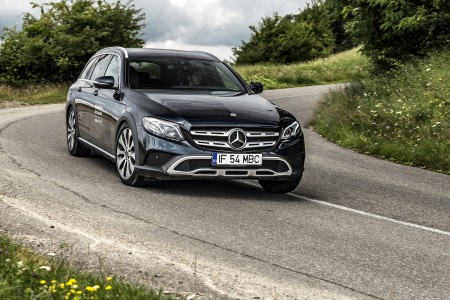 “Have they put new asphalt around here?” I asked myself. Along roads where it’s impossible to avoid potholes, you clench your teeth, almost close your eyes and brace for the jerk, you hardly even realize that you’ve passed the bump. Ready already? Is that all?  You ask in surprise. So where is the hump? “I swallowed it”, you almost hear the pneumatic suspension reply. It just likes to show off in the Comfort Mode.

From the Dynamic Select switch, I select the all-new All-Terrain, the mode that stands as the reason this car came into the world for. From behind the wheel, I see the hood lift and sense the car balance when it elevates by 35 mm higher than the T-Modell. The car hits a 156-mm height from the ground. If I go beyond 35 km/h, it returns to the Comfort mode and to its usual height, which is, anyhow, by 29 mm higher than the T-Modell sibling. The big wheels bring extra 14 mm to it and the suspensions puts some additional 15 mm. 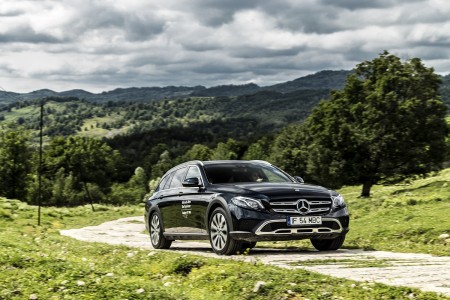 Mercedes-Benz E-Class All-Terrain brings almost 5 meters (4.94 m) of luxury and pampering. Under the elongated hood of the 220d 4Matic, finished, at the front end, with a new radiator grille with twin horizontal blades, there purrs a 2.0-liter diesel engine with 194 HP and 400 Nm, delivered to the all four wheel via an automatic 9-speed 9G-Tronic and that pull the almost 2-ton chalet (1,920 kg). At highway speeds, the needle of the rev-meter keeps a low profile, at 1,400 rpm. Nothing is heard inside this living-room in motion. The family car needs 8 seconds to float from 0 to 100 km/h. Just 7.3 for the sedan. Don’t test it while kids are on-board. From no special reason but that that they might like it and you’ll end up with a speed ticket. Who’s the big kid anyway?

The E-Class All-Terrain comes with additional shields at the front and at the rear and plastic protection on the wheel arches, providing it with the look of the off-road rebel. The bad boy features though melt on the inside, where nothing betrays its rebel personality except for, of course, the All-Terrain program. Everything is ideally placed in there, just like in the sedan: the TFT 12.3-inch dual displays and the possibility to control the infotainment system by gliding your fingers on the steering wheel are unchanged. 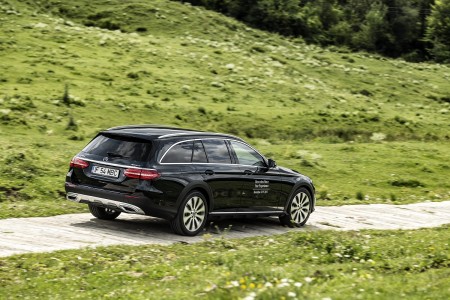 E-Class All-Terrain, with a 2.93-meter wheelbase, is a genuine living-room on wheels. So much that the passengers need amplifiers so they can be heard by the driver. If they talk too loud though and way too much, the Burmester sound system will keep you isolated from the noisy people and will instantly transfer you into a concert hall.

The tailgate opens the way to a huge trunk, of 670 liters. With the rear seats folded, you can improvise quite a bedroom in there. The open space gives you the feeling that you can fit in there the whole furniture when you’re planning to move, with your family and all. And there’s still room to fit the family dog in there. But let’s get back to reality. A button in the tailgate and on the driver’s door pulls the tow hook out and discretely put is back under if you don’t need it.

Elegant as an evening news anchorman, the E-Class is essentially a workhorse with a fake SUV aura around floating it. 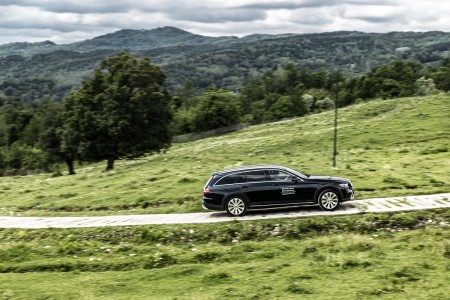 Why would you buy the All-Terrain instead of a T-Modell? Maybe because you are more of an adventurer than other family leaders are and you want to take your kids and swing them in the off-road.

But why would you buy an All-Terrain instead of a GLE, which stands on the same platform, just that it’s a fully-fledged SUV? Maybe because you still treasure that driving pleasure. 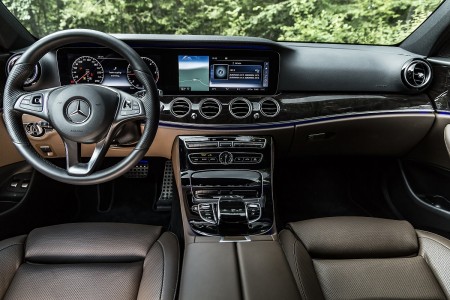 The versatile E-Class walked like a supermodel on the catwalk of the crash tests, easily getting the 5 stars. With autonomous driving features, the E-Class All-Terrain, just like the sedan, changes lanes, turns and asks you to put your hands on the steering wheel. If you don’t follow orders, it reduces speed and safely comes to a standstill. The Drive Pilot enables following the car to speeds up to 210 km/h. The Speed Limit Pilot sets the pace and the speed depending on the speed limit in the area.

As surprising as can be, the Mercedes-Benz E-Class All-Terrain keeps the elegance of the sedan, adds the practical character of the T-Modell and some off-road kind of salt and paper . But the SUV enthusiasts are probably never going to pick an All-Terrain instead of a giant with a 20-centimeter ground clearance. A hybrid lost and found among segments, the E-Class All-Terrain is quite a Jack-of-all-trades!