The electric equivalent of the GLB offers, like its conventional sibling, the option of seven seats and a sliding rear seat. And it debuts with two-motor versions and electric all-wheel drive. Test driving the Mercedes EQB 300 4Matic with 228 HP and 390 Nm.

Mercedes is going two ways: the dedicated EVA platform for the larger class models – EQS, EQE (already launched) and the upcoming EQE SUV and EQS SUV and platforms derived from conventional ones (MRA for EQC and compact class MFAII for EQA and now also for EQB).

Like the conventional model, the Mercedes EQB comes optional with a sliding rear bench (428.40 euro) and two seats in the third row (1,416.10 euro, not available with Edition1 package). The test model with Edition 1 package came in a 5-seater configuration but space is similar to the GLB so the third row will accomodate people up to 1.65 metres tall. As with the EQA, the floor is higher than the conventional model because of the battery. So, passengers won’t stay as comfortable as in the GLB because they will sit with their knees in the air.

The boot is also slightly smaller than the conventional version but the differences are small: 495-1,710 litres compared to 570-1,805 litres in the GLB. On the other hand, folding the 40/20/40% split backrest  gives a flat load area and there is a protective carpet in the boot. There’s no room for cables under the boot floor but Mercedes offers two stylish bags for storing the two cables – the one for the 220V network and the one for the three-phase AC network. 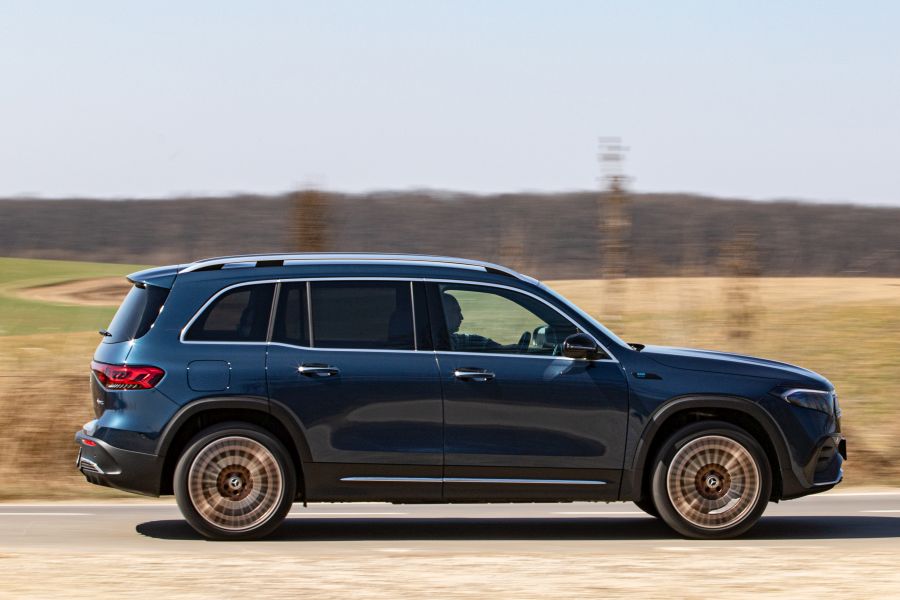 The adaptive suspension option lets you adjust the suspension stiffness in Sport or Comfort but the 20-inch wheels ruin the comfort. Even on the Comfort mode of the adaptive suspension, the suspension is too firm and the damping is harsh especially over short bumps. The good news is that if you don’t opt for the Edition 1 package, the standard Progressive line trim comes with 18-inch wheels. And in the case of the EQA 250 we tested with the 18-inch wheels, comfort is far superior, a sign that wheels play an important role in ride comfort and that extra-large diameter wheels looks good but are not always the best solution.

On Sport mode, on the other hand, the roll is low despite the 1667 mm height. Ground clearance of 154 mm is not too high but no one will go off-road with this car. At 2175 kg (505 kg more than the GLB 250 4Matic),  Mercedes EQB 300 4Matic has quite a lot of inertia in cornering but unlike the single-engined EQA 250, it has better grip at the limit and better transverse dynamics. It accelerates smoothly and quickly, reaching 100 km/h in just 8 seconds, but it doesn’t feel sporty but also not underpowered.

The two engines add 38 HP and only 15 Nm over the single-engine version, which doesn’t substantially improve longitudinal dynamics but offers better grip and traction. Under normal conditions on dry asphalt only the front engine pulls, the rear one only kicking in when needed. However, energy consumption is relatively high. We recorded a consumption of 23.8 kWh/100 km compared to the official figure of 18.2 kWh/100 km in an outside temperature of around 10 degrees.

The boxy silhouette similar with the G-Class and the fact that Mercedes has kept the classic door handles and roof rails don’t help aerodynamics, crucial in an electric model. So,with the 66.5 kWh battery, the actual range is just under 300 km. Driving in Eco mode and using recovery in town (four degrees of recovery are available from the paddles behind the steering wheel) can give a range of more than 300 km but still far from the officially announced 420 km. The EQB can be charged from 11 kW AC or up to 100 kW DC stations, in the latter case charging from 0 to 80% takes 32 minutes. The price difference compared to the EQA is only 1,773 euro which is not much

If you don’t need 7 seats, the Mercedes EQA is still the optimal solution. It’s more comfortable, cheaper, more economical and more agile to drive. But the right propulsion choice is the twin-engined one because it offers more grip and traction.