A test drive on water? Why not? The journalists of Car Magazine have done it, getting on-board the Arrow460-Granturismo, the marine cousin of the Mercedes-Benz performance car Mercedes-AMG S63 Coupe.

Fascinating as it may seem, the sexy yacht is a technologized machinery, speed boat that has conqured waters just as the cars of the company have conqured land. With 960 horsepower, two diesel engiens, a price tag of over 2.5 million Euros, with an anchor, sunbeds and a „terrace by the sea”, the boat is the perfect holidaying tool. 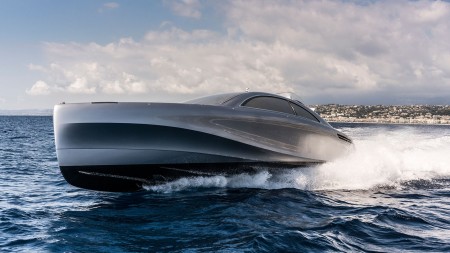 Taking the plunge, Mercedes-Benz Style has designed, at its Como studios in Italy, permanently supervised by the Daimler AG design chief Gordon Wagener. The car journalists have found the Silver Arrow of the Seas a 14-meter innovative yacht, using technologies and processes borrowed from the motor industry, with comfort being more important than speed.

Two diesel engines and 960 horsepower, the Edition 1 goes as high as 2,5 million Euros plus taxes. The company’s target is to have four boats delivered by the end of 2018. Is it worth the money? The journalists of Car Magazine have put it through its paces, on their way from Cote d’Azur to Corsica, on the Mediterranean Sea. 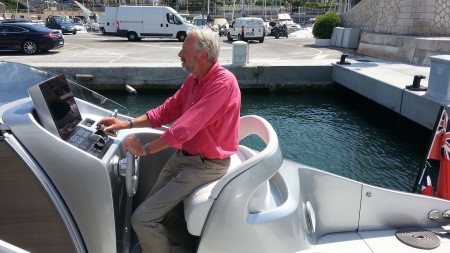 It’s easy and smooth to drive – they say – there is no need for any classes to be able to make it slide on waves. „Literraly child’s play”, they say. Most of controls are at the move of a joystick system, that ccoordinates prop and bow thrusters with perfect precision.

It’s quiet and smooth at speed – they say – with a pillowy ride through moderately choppy waters. No crashing, no banging, no getting wet.

From the „terrace by the sea”, a hydraulically-extending swim platform, sliding out of the stern, passenger can plunge straight into water for some snorkling. With the fully retractable side windows and with the vast glass sunroof lifted, the yacht allows the entire Med breeze step on-board. There are kitchen facilities on the deck and the simple push of a button makes a table slide out or in. Another button makes a king-size double bed show up out of nowhere, for a night under the stars. 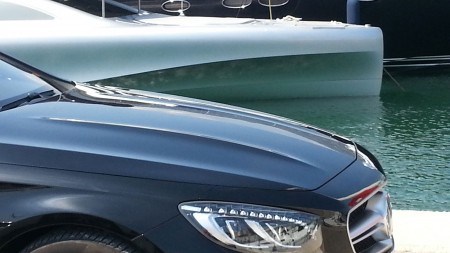 A big shower room, loft-style furniture typical for the Mercedes cars, in Alcantara and mesh fabric materials and plenty of high-tech elements: JBL and Bose entertainement systems, electronically dimming glass (like the SL’s Magic Sky), give that home-like feeling on the sea.

For the verdict, head over to the Car Magazine website.