Test drive Mercedes EQA 250: as refined as a GLA

Mercedes is in a hurry to put the new electric models on the road. The electric sibling of the GLA debuted in the 140 kW (190 HP) front-wheel drive version. Test drive Mercedes EQA 250.

A second way is to adapt a conventional platform to electric propulsion. That was the case for the EQC built on the basis of GLC and the new EQA. The latter is based on the GLA. Both the EQC and the EQA are transition models. A dedicated electric platform for the compact and middle classes called MMA will debut in 2025.

But until then, the Mercedes EQA is Mercedes’ offering in the class of electric compact SUVs. EQA debuts with front-wheel drive and 140 kW (190 HP) asynchronous electric motor. Subsequently, there will also be 4Matic all-wheel drive versions that will have a second synchronous electric motor at the rear axle. These versions will develop over 200 kW (272 HP) and will benefit from the Torque Shifting function introduced with the EQS. Torque Shifting allows real-time torque distribution between the front and rear electric motors. The adjustment takes place at a rate of 100 times per second. 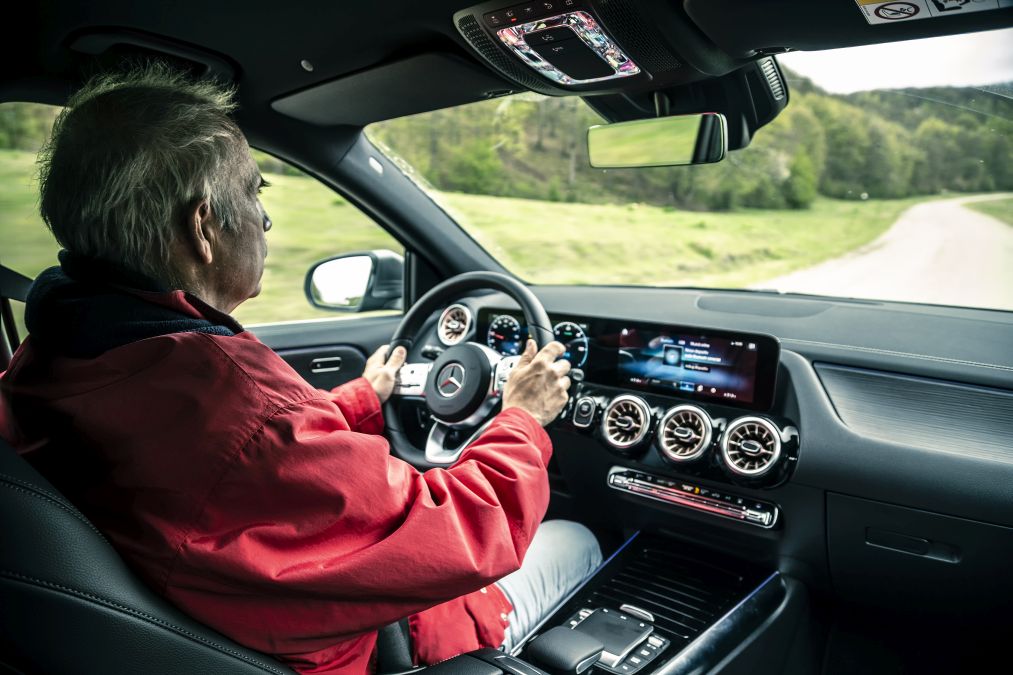 Test drive Mercedes EQA 250 – What is the official range?

Mercedes EQA 250 has a range of 426 km according to WLTP standards. But Mercedes also announces a long-range version that will be capable of driving for over 500 km between charging stations. The Stuttgart-based manufacturer does not provide any further data about this version. But we estimate that it will have a lower power of about 150 HP.

Mercedes EQA takes over the drive train from GLA, with McPherson strut front axle and four-link multilink rear axle, and unlike EQC, at EQA you can optionally order adaptive suspension (1,178.10 euros).

Compared to the GLA, the Mercedes EQA does not have sliding rear seats (428.40 euros at the GLA). And by folding the backrest of the rear seats, a small loading threshold shows up. The space in the rear is identical for both models, because the wheelbase is identical. But the trunk volume is smaller for the electric model by almost 100 liters. Only 340 liters compared to 425 liters for the GLA with all-wheel drive and 435 liters for the GLA with front-wheel drive.

On all electric models, the payload is quite low. But the EQA promises a payload of 430 kg, only 90 kg less than the GLA 200. And unlike many electric vehicles, the EQA 250 can tow a load of 750 kg. That means we can carry a caravan or a boat with a medium weight.

Test drive Mercedes EQA 250 – How does it actually drive?

The driving position is almost as high as in the GLA, because the EQA is only 9 mm higher than the GLA. The gearbox switch is also on the right side on the steering column. But the paddles on the steering wheel are no longer used to change gears. They are there for the selection of the degrees of recuperation instead.

At start-up, the car is engaged in D Auto, in which case the Eco Assist mode works. And the driver can choose the D + (Coasting), D (low recuperation), D- (medium recuperation) and D – – (high recuperation) modes. On D – -, the recuperation is so strong that the car brakes until it almost stops. That is why in the city, it can be driven in D – – mode without using the brake if you anticipate the traffic. 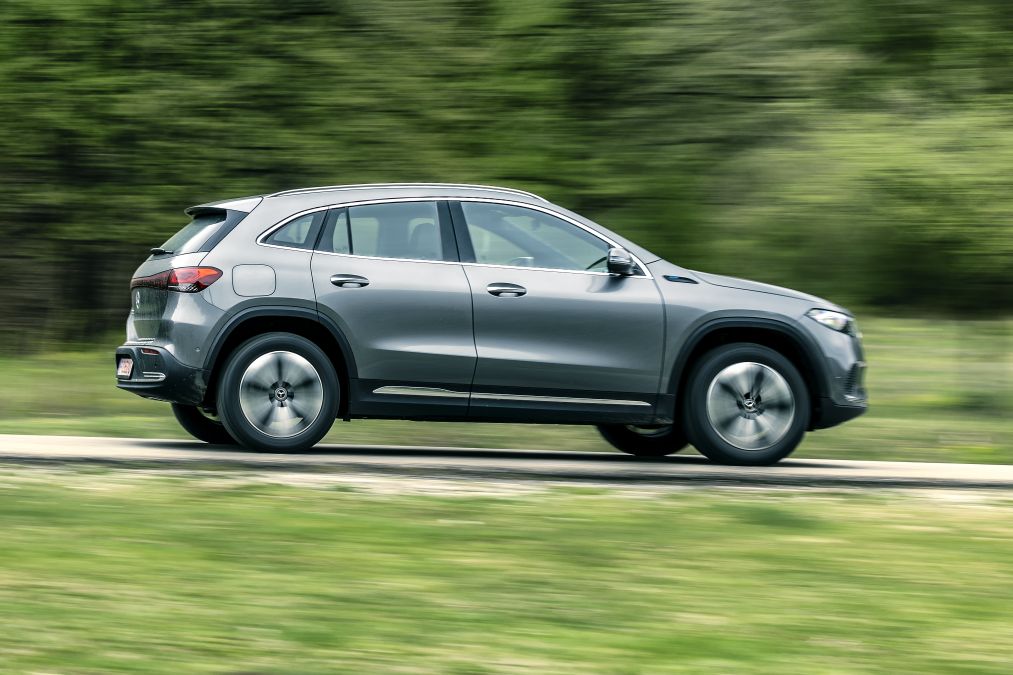 The Eco Assist function takes into account the inclination of the road or the proximity of an intersection. For example, when going down a slope and the car is in D Auto, the driver receives a message to take his foot off the throttle pedal. The same message shows up if a speed limit occurs. In this case, the vehicle gently decelerates, while while recovering, to the new speed, followed by coasting.

There are, of course, the well-known Drive Select driving modes, identical to those of the conventional GLA: Eco, Comfort, Sport and Individual. They allow the adjustment of the engine response, gearbox and steering  and of the optional adaptive suspension, if the owner ticks the box for it.

What is the real range of the Mercedes EQA 250?

Unlike other electric models, the EQA 250 feels almost like a GLA with conventional propulsion. Although the car is 555 kg heavier than a GLA 200, the comfort of the suspension is just as good. The EQA runs smoothly and comfortably like a genuine Mercedes. Despite the high weight and ground clearance of over 200 mm, the Mercedes EQA does not tilt more in corners. And the only difference is that you feel a little more inertia due to the extra weight.

Also, the EQA 250 is as refined and quiet as any GLA and there is an explanation for that. The axles are attached to the body by means of sub-frames elastically connected to the body. 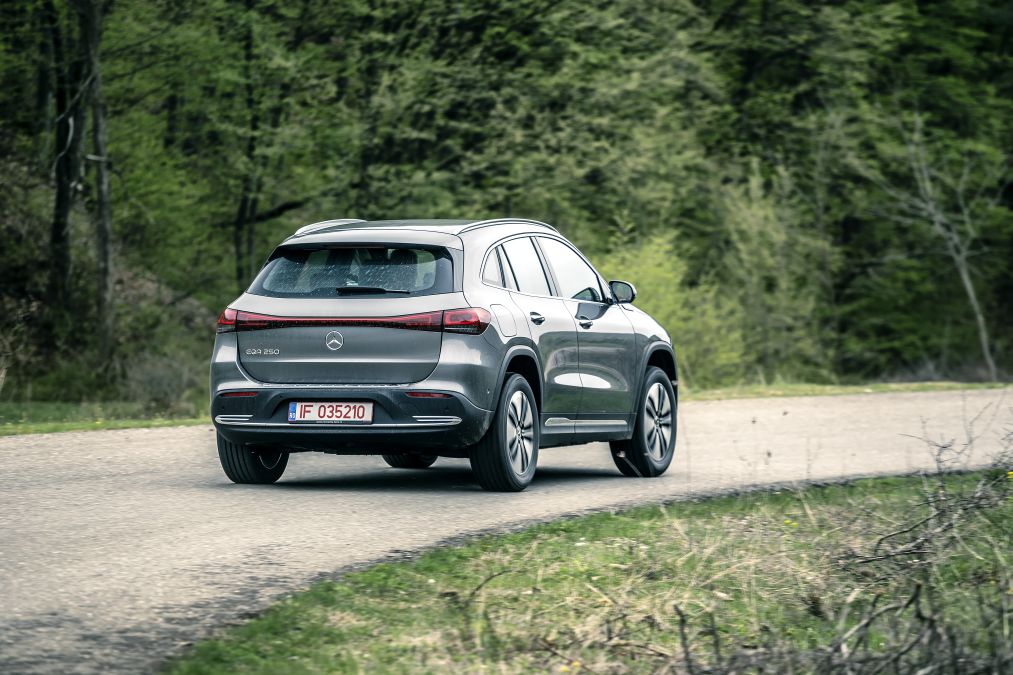 Mercedes claims a WLTP range of 426 km which is a bit optimistic, but not very far from reality. We managed to cover 332 km and the battery still had a range of 10%. That means that you can drive for about 360-370 km between two charges.

Charging at 100 kW DC stations takes about 30 minutes from 10 to 80% while a full charge on an 11 kW wallbox takes 5 hours and 45 minutes. The relatively economical energy consumption is also due to the very good Cx for an SUV with a ground clearance of 20 cm. It is of only 0.28.

In terms of price, the Mercedes EQA 250 is a better choice than the GLA 200 for the same money because it also comes with better standard equipment. The range is decent and the dynamic performance is reasonable. It feels like a real Mercedes in interior and when you drive it: silent, refined, comfortable.