While some car manufacturers choose to build hybrid cars, Mercedes-Benz sees the new technology as an additional element, meant to streamline discreetly and not to reinvent. Test with E 300 Hybrid which combine a bi-turbo diesel engine with a small electric engine.

Each time I’m driving a hybrid automobile, I feel like I’m reinventing myself more at a cognitive level, I learn to handle the acceleration in another way, to recycle all the empty bottles from the car, to glide the mirrors and, finally, to compete in an eco marathon. In fact, this script it’s not fitted for me since I don’t have the necessary patience for new low records on fuel consumption. Even so, the idea to drive a car that was conceived for low fuel consumption and to save what is left of the last polar bears, made me consider making a change.

The E 300 Hybrid looks exactly like every E-Class, excepting the flashy BlueTec Hybrid logo placed on the trunk lid. Apart from this, nothing too visible that can certify that this car includes a hybrid propulsion. This discreet approach was engineers’ main idea, who wanted to introduce the hybrid technology with minimum technical adjustments.

Therefore, the electric engine, hidden from viewer’s curiosity, is placed between the transmission and the engine, and the Li-Ion battery pack lies where normally you’d have found the classic battery. British people call this approach mild-hybrid. Mercedes-Benz doesn’t lack technological resources, but this situation still makes you wonder the reason why the Germans selected a full hybrid engine which they can promote with semi-utopian electric autonomies, just like other do. The answer is rather simple, a more advanced technology would have generated problems on two levels: the first one would have included redesigning and repositioning many components, from the engine to batteries, while the second level would have covered the additional costs, a major element even for premium customers.

For Mercedes-Benz, E 300 Hybrid is more of an experiment meant to reveal the economic and ecological performances that can be achieved with minimum number of technical modifications, but also to indicate how customers will perceive a hybrid logo on an essentially classic model. The exterior design has suffered changes that have overcome the level of a mere facelift, and the result is distinguished and elegant. Furthermore, if you add the AMG package you also receive sporty features. 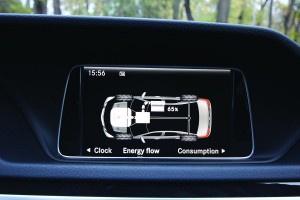 The interior is peaceful and silent and, even though it’s not too visible, many adjustments were made in order to recreate the high quality sensation. The classic layout remains an important coordinate and it matches the idea of an executive sedan. You can’t just neglect the fact that you’re driving a hybrid, because the right clock shows the status of the electric engine (regenerating charging, power engagement, neutral), instead of the usual rev counter.

When starting the car, the 2.2 litre and 204 HP engine is in dormancy, a state that lasts for a couple of seconds, depending on how you push the throttle. If you start easily, until you get honked at the traffic lights, the electric engine is the main character in this play, but its resources are limited to 27 HP, and the low capacity battery is in the same league of efficiency. Mercedes-Benz engineers are honest regarding the electric autonomy and they didn’t announce more than one kilometer, so they have a big plus for their sincerity. The whole idea behind this reduced hybrid system is helping the diesel engine to reach its maximum efficiency potential and not to replace the classical propulsion. For instance, the hybrid system starts the vehicle when the internal combustion engines are least efficient, and after that, it only does the “coasting” work when the scenario makes it possible. The “coasting” concept is simple, when you take the foot of the throttle, no matter what reason you’d have, the diesel engine stops instantly, and the electric engine takes over all car functions. All these electric interventions lead to an urban fuel consumption of 7 l/100 km, notable for a car as big as E-Class. Hybrid system’s interventions in the extra urban are limited because of the cruising speed, but even so, we get a 5 l/100 km fuel consumption.

In US, Mercedes also sell a model with a similar mild-hybrid propulsion. But under the name E 400 Hybrid work a 3.5 litre natural aspirated 302 HP engine instead of the 2.2 litre 204 HP bi-turbodiesel, combined with the same 27 HP electric engine. The price of E 400 Hybrid is 56,700 USD.

Mercedes-Benz is not trying to reinvent the hybrid niche, it’s just trying to package it in such a way that it causes a minimal amount of technical fuss. Even if the electric range is just 1 km, the system is very effective in town driving because it lets the diesel engine shut down when you don’t need it.