If those on the bus look up to you, literally. If the button for the access card in the parking lot is much too low. If any pothole is nothing but a needle hole, it’s all clear. You are driving a G-Class, in all its cubic glory. We’re testing the cube on wheels, a luxury cube with an off-roader charisma. Test drive Mercedes-Benz G 500. Photo credit: Adrian COBZAȘU.

I climb onboard as if I would mount a horse. I put one foot in the stirrup (on the sill, actually) and escalate into the saddle (driver’s seat, sorry!) of the car with a 24.1-centimeter ground clearance and a height of nearly 2 meters. I comfortably sit in the multicontour seat wrapped in Nappa leather, with air-chambers active side bolsters and massage programs and that is it, I am exactly where I wanted to be. No, not the Everest! But the next best thing: the G-Class. Wow! From up here, at 92 centimeters from the ground, behind the steering wheel, I’ve got the feeling that I can see all the way to the opposite side of Europe. Is the Portuguese Cabo da Roca right there? 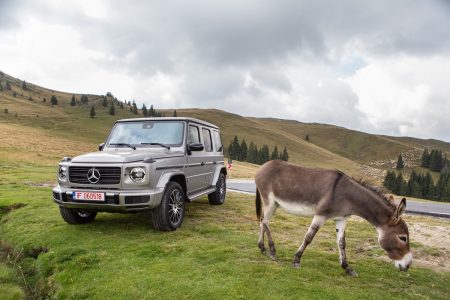 From outside, the round headlights, now with MULTIBEAM LED technology, grant it with the „Are-you-talking-to-me?” kind of pose. The turn indicators and the door hinges, together with the spare wheel on the tailgate have kept their ground. Little has Mercedes changed on its most long-lasting model, leaving its personality unaltered by the four decades that have gone by.

We say about those that are not quite realistic that they live inside a bubble. Well, for a few hours, I lived inside a cube. The G-Class builds a whole cuboid world around me. A world of luxury, that does not artificially try to mask the core of the car it once was: a military vehicle with the shape of a quadrate. The door closes with the unmistakable sound. I open and close it again and again, as I just can’t get enough of that „clack”! Nothing but the Magna Steyr-made symphony. 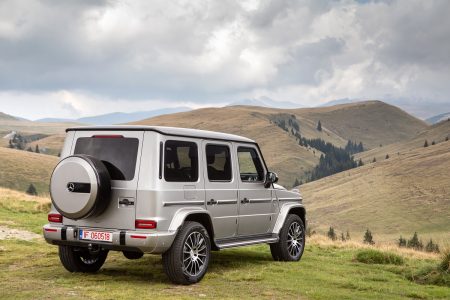 The headroom was never a problem onboard the G-Class, as those enrolled in the army had to go inside the vehicle without taking their helmets off. Well, we take our hat off in front of the G though. You can even sit there with your hands up. And you’ve got every right to do so. When the doors lock, the sound of the lockers make you believe that gun fire started. Don’t shoot, we’re all peaceful, even if the car says different.

For sure, the gun men from the late 70s and early 80s, taking their seats at the back, did not benefit from their own climate control, nor from the 12-Volt socket and the USB port. But those from today may. 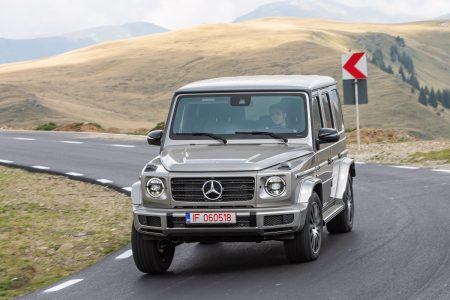 Stronger Than Time – Mercedes started promotion of the new G-Class

The G-Class comes with a new radiator grille and surprisingly, a better drag coefficient, so that it stops wrestling with the wind on the highway. But it can challenge  the rough terrain, as Mercedes granted the car with a new G-Mode, that is engaged by pressing the Low-Range button in the center console. The letter G lights up discretely in the dashboard. All others can be engaged via the Dynamic Select system.

There are two 12.3-inch screens under the same glass cover. One of them displays driving data, while the other one shows the features of the new infotainment system, just like in the E-Class business sedan. The system can also be controlled by the round controller or the touchpad in the center console, but also by voice or touch-sensitive buttons on the new steering wheel. How naive! I covered the central screen in fingerprints, forgetting again and again that it is not a touchscreen. 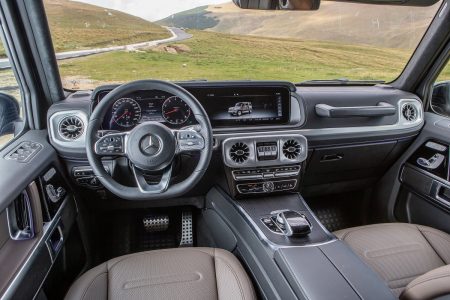 I start the V8 biturbo engine and hear from the side (yes, the exhaust pipe is on the side) how the 422 grizzlypower growls. Horsepower, sorry. I push the throttle paddle and the grizzlies cease to hibernate. The output and the 610 Newton meters of torque are transferred to both axles via the 9G-Tronic converter automatic gearbox.

This car is not about speed. It is all about attitude, all about almighty force. The steering is – Mercedes claims – as direct as it can be and as indirect as necessary. The Hollywood VIPs will jump for joy to notice that the boxy G , as is now easier to drive, despite its Gulliver-like proportions. The beast has been tamed for the road, but kept its buffalo abilities off the road. 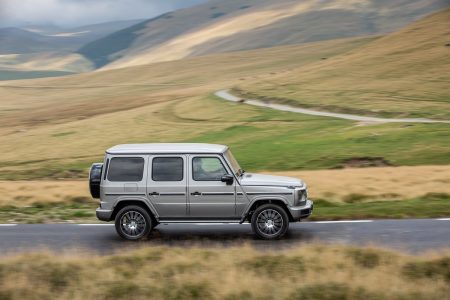 A 360-degree camera, that shows way more than the rear window, partially masked by the spare wheel, can show, together with the PARKTRONIC function, takes the stress of parking off your shoulders.

How do you stop the almost 2.5-ton (2.429 kilograms) of charisma though? Well, the motorized cube brakes better than before and earns your trust: it will stop in time.

The cubic G lives in a world where potholes and bumps simply don’t exist, all thanks to the front independent suspension and multilink rear suspension. The 20-inch wheels lay a duvet in front of the boxy brute.

Fuel consumption has never been an issue for the G-Class owners. But you can’t stop worrying when the 75-liter fuel tank empties with a speed higher than the maximum speed limit on the highway.

Because we were the first to test the new G-Class in Romania, we avoided the hazard of the off-road. So the new G will prove its capabilities off the beaten track some other time. But you must know that the handle in front of the front passenger and the three chrome-plated differential locks in the center console are not just for show. And to not forget the Low-Range button placed now on the right side of the controller which is a must for a professional off-roader.  In practice, it remains to be seen whether the new G-Class can still escalate the ski slopes for the advanced. If you wish to go downhill on the same route, you must switch to Manual mode, engage the first gear and the car shall go downhill at constant speed. Previous drive tests with the G 500 abroad have proven that the new car is not insult against the off-road enthusiasts. 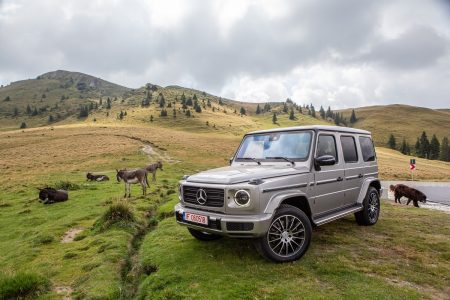 The rear seats split 60/40, but you have to lift the seating area first. There is no plain surface in the boot, but the space in there gives you the feeling that you’re living in a penthouse. An opening in the backrest allows you to take your skiing gear with you or the plinth when you’re willing to renovate that penthouse. Several rings and a net will keep your luggage in place while you’re battling the rough terrain that might seem impossible to most SUVs. Even the interior of the tailgate is partially covered in leather.

It may look rugged and rough and everything in between, but the new Mercedes-Benz G-Class is as smart as any luxury sedan of the brand’s portofolio. The BAS PLUS brakes when it detects danger, whether objects or pedestrians. A bit intrusive, the standard Lane Assist pulls you back into the lane once you step on the white line. But it would’ve helped better if it saw the gentleman in that tiny car coming out of a street straight into the national road. Well, luckily the driver did and we brought back the car, as good as new except for the dust, with the 100 liter tank half full, after driving for about 350 kilometers approximately. After a simple calculation this mean 15.7 l/100 km which is not bad for the cube shape and V8 4.0 liter turbo 422 HP engine.
Who look for more efficiency has to expect for the diesel version which was not announced officially. But Mercedes has a very clean and powerful new 6 inline 3 liter diesel.
Bye-bye, cube! See you soon! The great outdoors await. 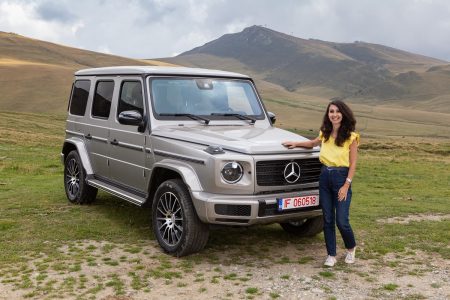 There are, of course, more potent, more capable, more stylish cars than the Mercedes-Benz G-Class. But none has the charisma of the German Panzer, that has been blown out of proportions, yet for a good reason. Mercedes kept its brutal nature, but dressed it up in the gala suit of the luxury sedans. A savage it was, a savage it stays, but now it has manners. It justifies the sky-high price through all its pores and wraps the trips off the beaten track in plush and style.