The Mercedes-Benz E 250 CDI comes up with a facelift that was worth one billion euros. After the makeover, it became a symbol of German rigor, a mature, cold model, breathing in premium air. Test with the E 250 CDI 4Matic.

Inside the segment of big class saloons, the Mercedes-Benz always strongly came in through the E-Class. With a special identity inside the range, the E-Class fought for supremacy against models like the 5 Series or A6. And it got to set the standards of comfort and refinement. But the car maker placed the sport second so far. Well, along with the launch of the new model, Mercedes-Benz decided to pay more and more attention to the way it engages the driver in the driving. It was though a move that many safety systems cover.

The changes were elusive. But, along with this facelift, they spent a billion euros for, according to the official representatives, sensations to feel from behind the wheel. Before I get to itemize this chapter, I cannot ignore the new brand identity of the two versions. The test drive model is Elegance, which has the logo reigning on the bonnet. Meanwhile for the Avantgarde, it shows up in the front grille.

I personally tend to favor the Elegance, which has a natural continuity on the inside too. Out there, everything seems designed by the rule. The feeling of everything well trimmed seems fraughter than ever. The sensation is similar for all the high-quality materials onboard. A great advantage is the way they were combined, but also the sober atmosphere that leaves no room for debate. 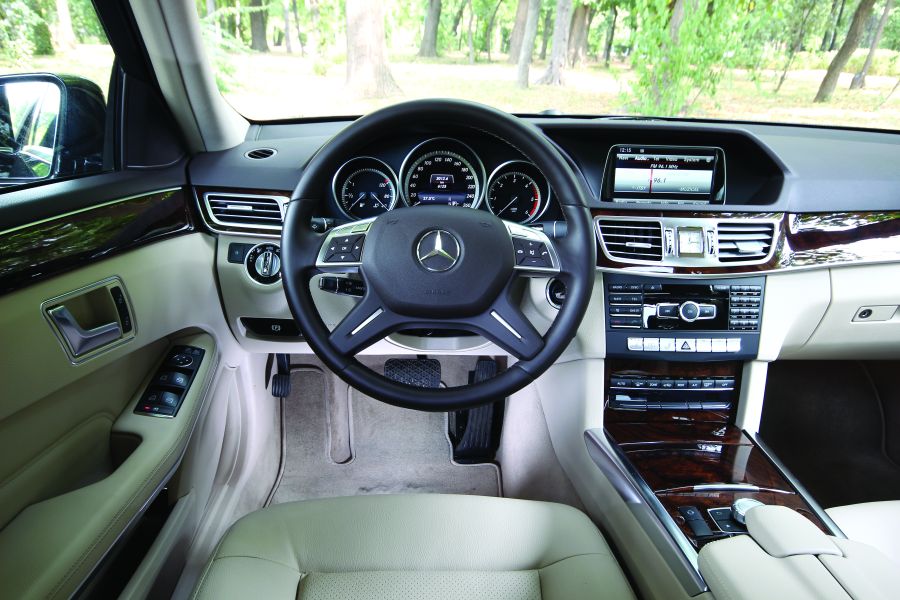 Up against the 5 Series, the space offer seems more generous. The short center console and the thin seats provide this advantage. The dashboard instrument clusters are easily legible now. Meanwhile, the color combination is somewhat over against the other elements on the inside. The analogue dial emphasizes the baroque character. But it takes no chances to become one of the „strained accessories”.

The easy way to set driving position, together with the vast glass surface and the lines of the straight body shell convinced me that it is easier to drive in the city, than the 5 Series and the A6.

It is comfortable to travel in the back seats, thanks to the thin back and the cushion area is somewhat longer than that of the competitors. The boot is 540 liters and optionally offers the Easy Pack feature. It is, “kind of a boot inside the boot”, very useful when you carry few things and you don’t want to displace them from one corner to the other at every brake or bend.

Mercedes-Benz E 250 CDI 4Matic – Where is that one billion euros?

I was skeptical at first when it came to the „billion euros facelift”. Well, after driving it for more than 700 km, I understood that a big part of this money hides away from the eyes of the curious. But it keeps close to the passengers of the car. The test drive version has the most fashionable diesel engine of the brand under the bonnet: the 2.2-liter biturbo 204 HP. The power unit connects to the 4-wheel drive 4MATIC system and to the automatic 7-speed 5G-Tronic Plus transmission. Right from the very start, I realized that they did not save any sound-absorbing materials. The noise typical for this engine stopped once I closed the door.

It is an illustros engine, available also in other models, enjoying a good reliability and a frugal fuel consumption. Under the bonnet of a 4-wheel drive E-Class, it loses the genuine fator a little, as the transmission loss is somewhat bigger at a speed over 100 km/h. Even like that, the car has a transcendent behavior, also provided by the upgraded steering, that gets the driver more involved in driving, together with the slightly more rigid suspension, compared to what Mercedes got us used to. Of course, you can choose the Comfort mode, which turns it into the most comfortable model in its class.

Along with the new models, the competitors keep up with them, but, as any Mercedes-Benz, the E-Class is very quiet on humping road. No stray sound, no wind noise, no road noise. Another important aspect is the fuel consumption, that, in my case, was placed around the 7-liter figure in 100 km combined drive. Even though we are talking about a facelift, the drive test proves that really important changes which were made are essential and the E-Class is in the best shape.

The 250 CDI 4MATIC is the code that has the correct sales price and which keeps a good value for a resale. It likes comfortable drive best, but the fuel consumption is close to the figures of a E 350 CDI.