It was the late 1930s, when the racing driver Hans Stuck was planning to break the absolute world land speed record. His vehicle of choice was the Mercedes-Benz T 80, with which he was hoping to hit a top speed of 650 km/h. At that time, the existing record was of 595.04 km/h.

The former record belonged to John Cobb and it was dated August 1939. But the 3,500-horsepower T 80 was a monster, a slim, flat monster measuring more than eight meters in length, with six wheels of 1.17-meter in diameter. The monster, fully preserved, has its place in the Mercedes-Benz Classic Collection. The body is a permanent exhibit of the Mercedes-Benz Museum, first introduced this summer. At the museum, the exhibit is accompanied by the model plate with the inscription “Daimler-Benz Aktiengesellschaft Typ 80”.

An aircraft DB 603 cutaway engine and a centrifugal clutch is covered by an authentically reconstructed spaceframe onto the chassis, as well as authentically replicated wheels. The cockpit features a lather steering wheel, pedal cluster, instruments with the rev counter graduated up to 4,000 rpm and driver’s seat with the original fabric upholstery impeccably preserved. Thus the innards of the T 80 are presented just as they were designed and built by Mercedes-Benz eight decades ago.

The “Model 80” was the brainchild of the racing driver Hans Stuck. It was designed by Ferdinand Porsche on behalf of the then Daimler-Benz AG from 1936 onwards – originally for a target speed of 600 km/h. The record-breaking attempts planned for February 1940 on the autobahn near Dessau never took place, so the T 80 never got to show its abilities. Four months later, with the engine removed, the vehicle was placed in storage. 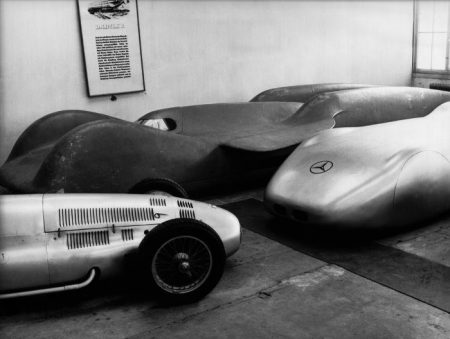 Decades later, in April 2017, the Mercedes-Benz Classic Center decided to go ahead with the project and make the original chassis exhibitable. That sounded like a rough mission involving the 80-year old vehicle that started with the help of an external starter on the clutch housing, as the dashboard only has an ignition key which powers up the ignition magneto.

The original engine was a test engine from the aircraft engine development department in Untertürkheim. It belonged to the Ministry of Aviation and had to be returned to the aircraft engine department. This original engine for the T 80 is lost without a trace. The original spaceframe of the T 80 together with the body and wheels is part of the permanent exhibition at the Mercedes-Benz Museum, as the specialists therefore welded a new spaceframe on the basis of original drawings from the archives that hold approximately 500 drawings relating to the T 80. 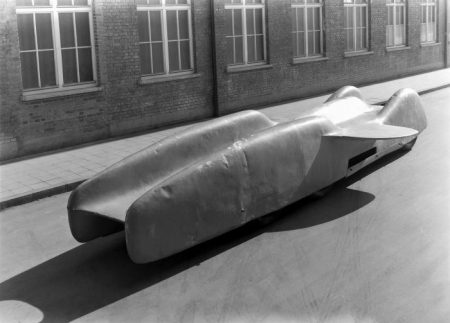 It took three months for the tubular frame to be rebuild, totaling 150 meters of steel tubes with an external diameter of 20 millimeters. The world record project vehicle measures 8,240 millimeters in length and only 1,740 millimeters in width and is just about 1,270 millimeters high.