What did you get for your 16th birthday? We don’t remember either, so probably it was not a Mercedes-Benz G-Class. Cause this is what Floyd Mayweather gave his daughter the day she turned 16.

“From presents and cake to Future and Drake” wrote the Celebrity Net Worth website soon after they got their hands on the exclusive photos from the teenager’s party. Hip hopper Drake and pop star Justin Bieber (just a video projection, though) were guests at the show at the Mirage Grand Ballroom in Las Vegas.

Little did Mayweather disclosed about the expenses, but the said the bash threw him back by 70 figures, the present in the shape of the G-Class included. But the lavish spending is just pocket change for the boxer, whose estimated net worth hits $400 million. 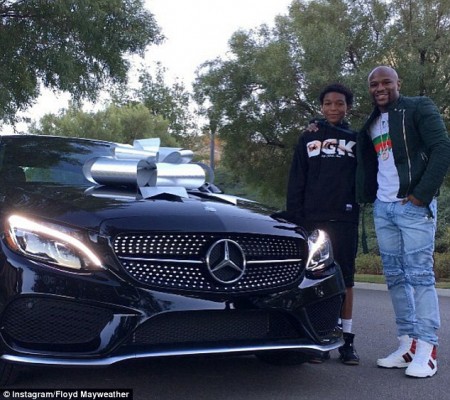 Young Iyanna is not the only child to get a Benz from the world’s famous father. Last November, his son Koraun got a custom-made Mercedes-Benz C-Class Coupe for which Mayweather had paid $55,000.