Our colleagues from auto motor und sport ask in this Supertest a simple question: who is actually the fastest series wagon on the Nordschleife. So far, Seat with the Leon ST Cupra 280 holds the record for the fastest station wagon on the ring. In 2015 racer Jordi Gené drove the family-friendly 280 hp station wagon in 7.58 minutes over the Nordschleife. Now Mercedes-AMG attacks with the E 63 S T-model 4Matic +!

The test driver slips into the optional AMG performance bucket seats with perfect lateral support. Given the pleasantly low seating position, you almost forget the dimensions of the almost five-meter wagon with a luggage capacity of up to 1,820 liters. The T-model from Mercedes-AMG gives you almost touring car feelings, at least when it comes to sitting position.

Sporty sitting position or not, on the scales the E 63 S T-model 4Matic + can not conceal its 2,103 kilograms. However, hope for an entertaining excursion is made by the route chosen by Mercedes-AMG in recent years: cross-dynamics today dominate the long-term development goal of longitudinal dynamics that has long prevailed in Affalterbach. 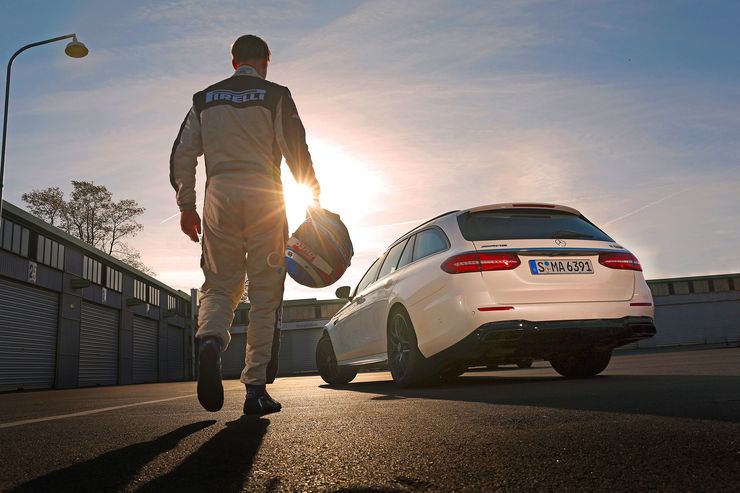 Strong start: as fast as 997 GT3 RS
Three, two, one – start on the Nordschleife section T13. As for every designated sports car, the timing for the Mercedes-AMG E 63 S T-model 4Matic + starts here on the fast Nordschleife lap. Rolling, pumping? Barely noticeable at the limit. The E 63 has tipped the Hatzenbachbogen turn with 151 km / h and it quickly became clear that this station wagon is not a normal one.

A quick look into the database. Who was just as fast on the same spot about ten years ago? Right, the first generation Porsche 997 GT3 RS. Similar to the current GT3 RS today, the 1,424-kilogram hardcore 911 with Michelin Pilot Sport Cup tires was one of the racetrack precision weapons of its time. 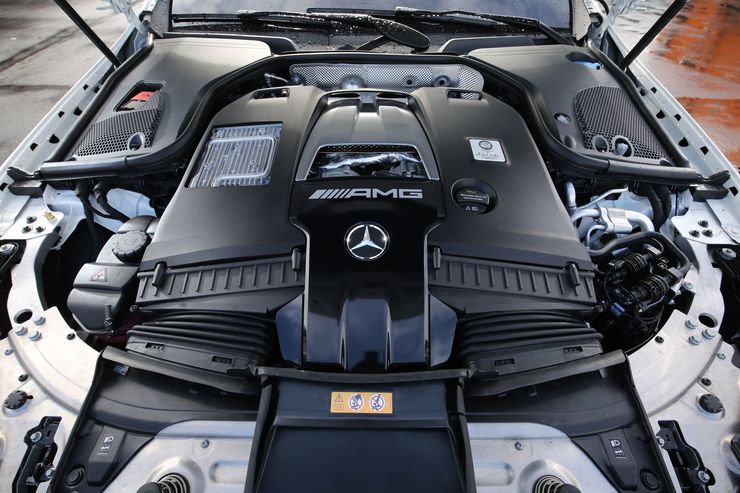 Without words! Today, a station wagon makes a GT3-RS legend look old. Wait, the Nordschleife is 20.6 kilometers long. But even in the Hatzenbach exchange curves, the E 63 is anything but awkward and always agile to exit the corner. On the brakes, however, it is easy to notice the T model after the first Nordschleife curves it can not completely override the physics.

Late brake points are not the flagship discipline of the fast battleship, as it then begins to slide slightly over the front axle when turning. If you prefer to delay the power a bit earlier in the curve entrance and the brake pedal is not jerky, but progressively processed, you will be thrilled that the 2.1-tonner dances almost playfully on the ideal line. 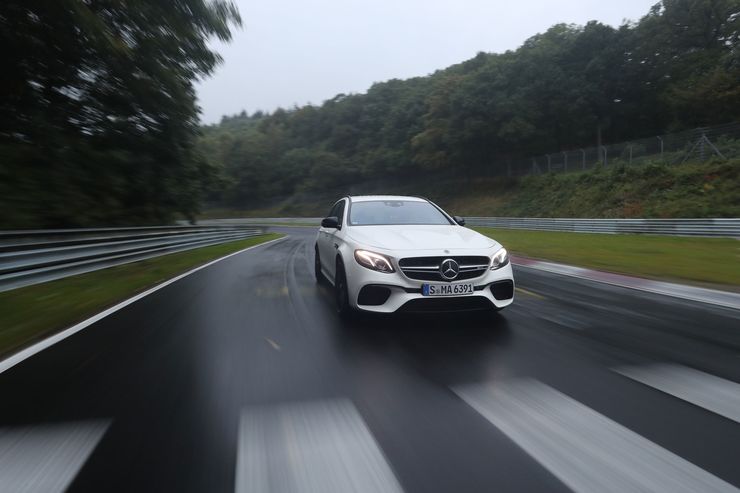 In plain English: If you do not get the Mercedes-AMG E 63 S T-model 4Matic + beyond its limits at the turn entrance, the Power-wagon reveals a front axle with astonishingly precise feedback. The electromechanical adaptive steering gives a direct, but not too pointed feedback about the middle position. The steering angle requirement is not as large as designed for a bus, but relatively sporty for the vehicle class of the E 63.

Thanks to the successful steering tuning, the T-model looks even on country roads or the racetrack excursion in curves not as lethargic as a beverage chest, but almost light-footed. The heft of the steering has been designed differently in the Comfort, Sport and Sport Plus levels. 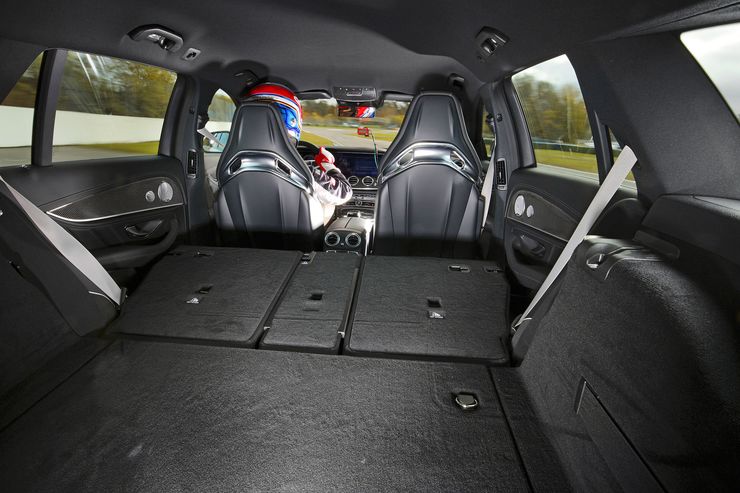 The Mercedes-AMG E 63 S T-model 4Matic + has just left the double right wing and is now storming towards the top of the Schwedenkreuz. “Storms” is the right keyword here: The V8 biturbo services the S-version with a fabulous nominal output of 612 hp and a maximum torque of 850 Nm. But even in the most powerful variant, the internally M 177 four-liter convinces with its good driveability. Two twin-scroll turbochargers were installed, so apart from the increased performance the response has been improved – which complements well the relatively uniform power delivery.

How brutal the battleship is doing, shows the high speed of the latter section: With 268 km / h, the E 63 takes the Schwedenkreuz Kuppe almost under full load just as fast as the Mercedes-AMG GT S. 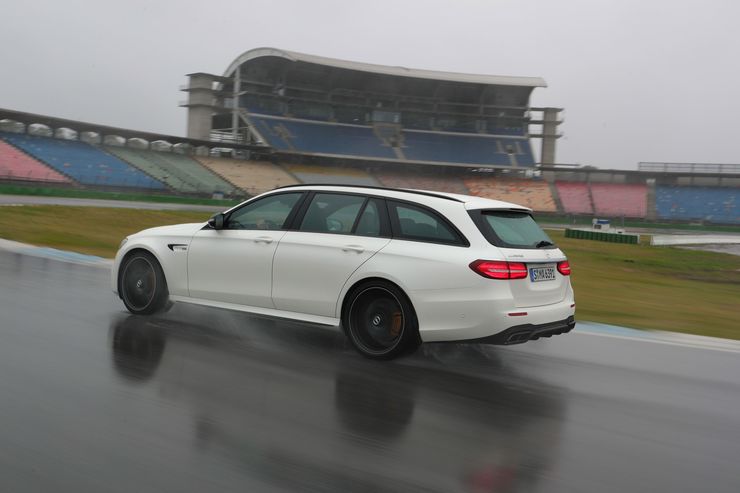 While some production vehicles here like to take off with the rear axle a little bit nervously, the muscle E-Class swallows the tip almost unimpressed and does not even lift off appreciably. Unsurprisingly, the E 63 S T-model 4Matic + has gained momentum on both axles at 200 km / h. Less the aerodynamics than especially the chassis developers have made a great job here: the E 63 estate does not stand out through annoying rolling or pitching movements.

Compared to the regular E-Class, the AMG model has its own front axle and rear axle construction. In addition to the sporty chassis with three-way adjustable air suspension (modes: Comfort, Sport and Sport Plus), the S-model is also equipped as standard with dynamic engine mounts. Sounds like a lot of sports car technology. Like the sedan variants of the E 63, the T-model also carry the newly developed four-wheel drive with, for the first time, variable torque distribution to the front and rear axles.

No wonder then that the T-model becomes the fastest station wagon on the Nordschleife. 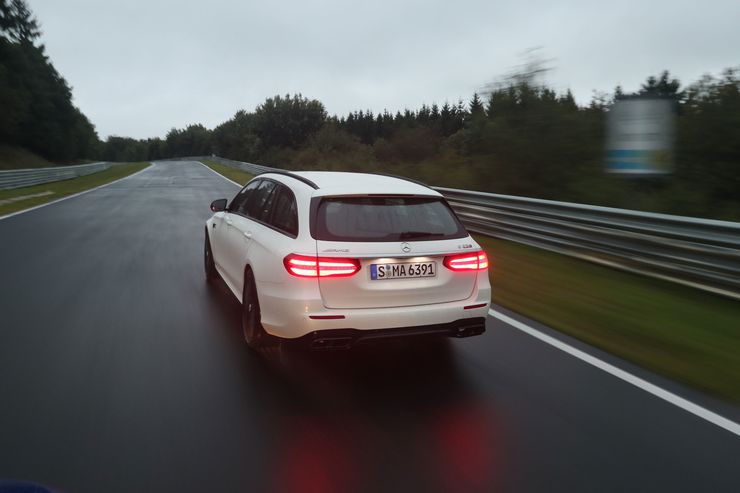 An electromechanically controlled clutch connects the continuously driven rear axle variably with the front axle. The torque distribution varies depending on the driving situation and also on the driver’s request. Thanks to the new drift mode, the T-model can also be moved as a pure rear-wheel drive. A fun mode, which would not help on the Nordschleife in the search for the fastest combination time and therefore does not play a major role in the super test.

Much more important on the next few meters is the optional ceramic brake system. The pressure point of the optional brakes remains constant and easy to dose, provided that sufficient cooling is ensured after every cycle around the Nordschleife.

In race mode, the AMG gearbox meets the switching points perfectly even in automatic mode, as is otherwise the case only with the Porsche PDK. The driver no longer has to pull himself on the shift paddles – not the most emotional type of gear changes, but certainly the fastest. 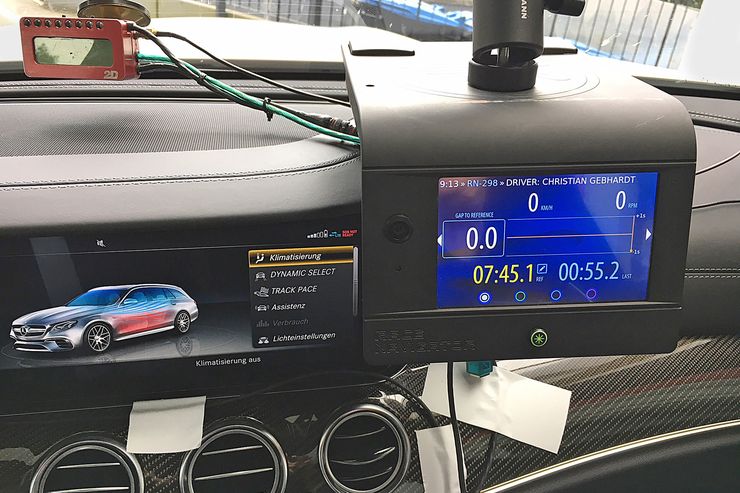 Faster than 997 RS and Superleggera
While the V8 biturbo marches relentlessly, it pulls the massive mass noticeably towards the curve outside edge. So rather hold back a bit, before the wheels on the right side fly at just over 220 km / h.

Only when driving towards Brünnchen you realize that the tires are slowly breaking down a bit. The power station wagon from Affalterbach starts to lean on understeer when turning in and out accelerating under load. Overall, the Michelin Pilot Sport 4S but works – in view of the massive vehicle weight – for a long time on a high grip level.

Pflanzgarten, Schwalbenschwanz, Galgenkopf – in the last Nordschleife sections, it is becoming increasingly clear that the Mercedes-AMG E 63 S T-model 4Matic + will far pulverize the previous wagon record, galloping at 292 km / h on the Bilstein Bridge.

With a lap time of 7.45 minutes, the Mercedes-AMG E 63 S T-model 4Matic + comes into action in regions that ten years ago were still dominated by sports cars like the Porsche 997 GT3 RS (7.48 min) or the Lamborghini Gallardo Superleggera (7.46 min.) min). Hats off, Mercedes-AMG! 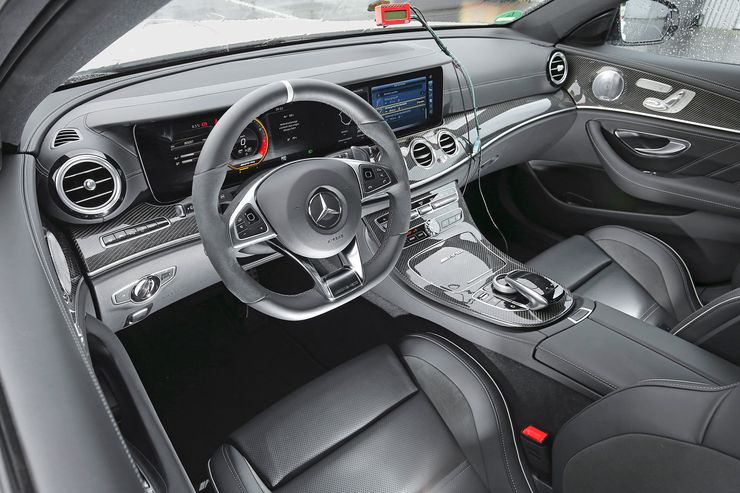