An incredibly detailed Mercedes-Benz W196, a 1:8 replica of Stirling Moss’ racing car is now available. It is the monoposto that the British driver drove to victory in 1955 at the British Grand Prix.

The iconic racing car secured the team the F1 World Championship the same season with 75% of the 12 races of that year. The most remarkable triumph was that at the home circuit. It was the moment that no less than four W196 racing cars finished first, second, third and fourth places. Sir Stirling Moss, who never won a championship title in his entire career, was then in the lead. 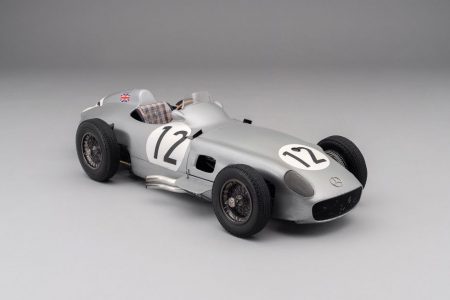 More than 60 years later, inching closer to perfection, Amalgam Collection presents the 1:8 model. It is the car in race-worn spec. The worn wheels, specifically designed so, show that it is not as one just rolling off the assembly line.

The expert craftspeople used period imagery of the winning car to draw, design and build the model. It comes packed with intentional imperfections, with scratches and deformations, dirt and debris, as any racing car would. The steering wheel also bears signs of wear after Sir Stirling Moss would have steered the car on the race track. 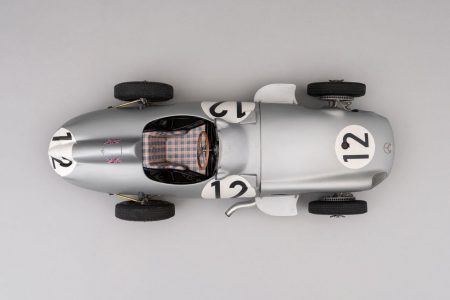 Amalgam worked in close cooperation with Mercedes-Benz. It was the only way for the team to make sure their engineering details and material choices were correct. Their model recreates the exact weave and fabric pattern o the original single seat of the car.

“Our models are so finely detailed that they’re hard to tell from actual cars in photographs. That’s why we try to have a hand or something in our photographs, so people can see the scale”, says Amalgam Director of Brand Sandy Copeman said in a release.

Amalgam will only build five such replicas of the W196 monoposto, each with a price of $17,165.