Stirling Moss dies at 90 after a long suffering. The former British driver passed on in his home in London. Moss had 212 wins in 529 races and was famously known as “the greatest driver never to win the World Championship”.

He started his racing career with his father’s 328 BMW, despite his father wanting him to become a dentist, and eventually switched to a Cooper 500 racing car in 1948. He advanced to Formula Three and achieved his first major win in an international race on his 21st birthday, with a borrowed Jaguar XK120, at the 1950 RAC Tourist Trophy in Northern Ireland. From that moment on, winning became a habit. In 1955, he got on the top of the podium with the famous Mercedes-Benz 300 SLR.

Stirling Moss also ticked wins in Coupe d’Or, finished second at the 1952 Monte Carlo Rally and, in 1954, he was the first non-American to win the 12-Hour of Sebring.

In 1953, the head of Mercedes-Benz racing, Alfred Neubauer, insisted on his joing in the Mercedes Grand Prix team one day, but first, he wanted to see Moss in a better car. He bought a Maserati 250F, a car with which he achieved his first Formula One victory at the non-Championship Oulton Park International Gold Cup.

He got the attention of the Mercedes boss

With the same car, he passed Juan Manuel Fangio’s Mercedes and Alberto Ascari’s Ferrari, but his engine failed in lap 68. Fangio swept by him and Moss – with an impressive effort – pushed his Maserati over the finish line. It was the moment Neubauer was convinced that Moss was the driver he needed and immediately signed him.

In 1955, with the Mercedes-Benz W196, his first World Championship victory came at Aintree, leading a 1-2-3-4 finish for Mercedes. 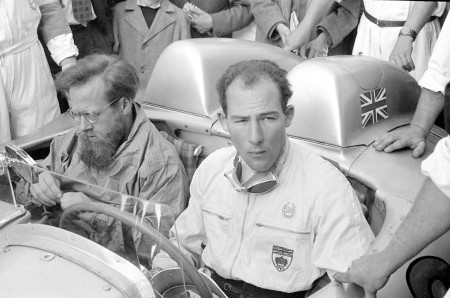 In April 1960, the F1 driver was found guilty of dangerous driving, while test-driving a Mini. Fined with 50 pounds, he was also banned from driving for a year.

Mercedes revealed the final edition of the Mercedes-Benz SLR McLaren as a tribute to Sir Stirling Moss, with the limited-edition model with a top speed of 350 km/h and no windscreen, bearing the name of the legendary driver.

Even though retired from 1962, Sir Stirling Moss and his Mille Miglia Mercedes-Benz 300 SLR made their first public appearance since retirement, at the Goodwood Festival of Speed. The iconic automobile has since then been displayed at the Mercedes-Benz Museum in Stuttgart.

Moss was also invited to Goodwood in September 2009, when he drove a Mercedes W196 Monoposto. 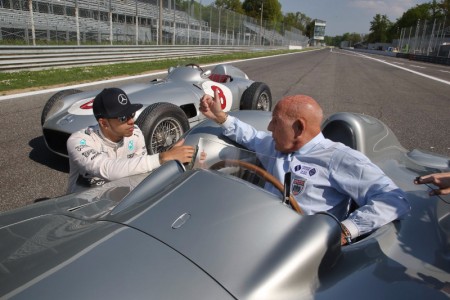 He was 80 years old when he suffered an accident at his home and broke both ankles, four bones in a foot, chipped four vertebrae and suffered several skin lesions. But the invincible former racing driver returned to make an appearance at Silverstone that year.

In December 2016, he was admitted to hospital in Singapore with a serious chest infection. The sickness forced him to announce his retirement from the public life in January 2018.