OK, so the new smart Forfour is finally getting its Brabus makeover. So, what to expect? 850 hp and a top speed of 330 km/h? No, this is not that kind of a Brabus…

But wouldn’t that be cool, though? Deadly as well, yes, but cool nonetheless.

The two Brabus versions of the smart family will be using the same 0.9 TCe engine as the standard models, so 850 hp from that kind of displacement is too much even for Brabus. Think more like… 130 hp.

Brabus smarts never were quite as fierce as their other models, so we really shouldn’t expect that much of the new one either. But think about it: a small and light car with a rear mounted engine and rear wheel drive developing 130 hp… not bad at all.

Here it is now, wearing limited camouflage and jetting around southern Spain getting ready for the big day which, we’re told, might just come this September in Frankfurt. By the looks of it, the smart Brabus Forfour (and Fortwo as well) will have larger and more aggressive front and rear bumpers, as well as modified suspension that brings the car lower to the ground. 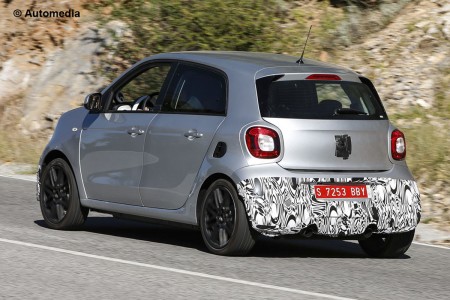 In this world, though, image is nothing without sound and so the smart Brabus packs a new exhaust system with twin tailpipes. There won’t be any V8 rumble coming out of those, but they will surely provide more drama than the regular setup.

On a sidenote, the sister model from Renault will be getting its own spiced up version which will be called the Twingo GT and will share most of the features.