When it comes to big, luxury limousines, the U.S. have lately been trailing behind their European rivals, but things look like they’re about to change.

What you see in these images is the new luxo-barge from Cadillac which a lot of people say will be named “CT6”, as in keeping in line with their new numeric naming scheme (where regular cars bear the name CT while SUVs are called XT).

The car is so heavily clad in camouflage that it’s almost impossible to distinguish anything other than its dimensions and a vague idea about the overall shape. The Cadillac CT6 looks like it’s going to have a very steep, abrupt front end, and a hood long enough to land a plane on.

People expect (or at least hope) it will take over a lot of design cues from the superb Elmiraj concept, and the recent cameo in the Cadillac Oscars ad of a white car resembling CT6’s description hints their hopes might be met by the American automaker.

The information available at this point has more to do with the technical bits than the aesthetics. It will sit on the brand’s new Omega II platform and will likely use the existing 3.6 V6 engine from the CTS as a standard setup, while a V8 engine should also be available. The Cadillac CT6 is thought to come as a rear wheel drive limousine primarily, with the option of a four wheel drive system also available. Transmission should be 8 speed automatic all across the engine range. 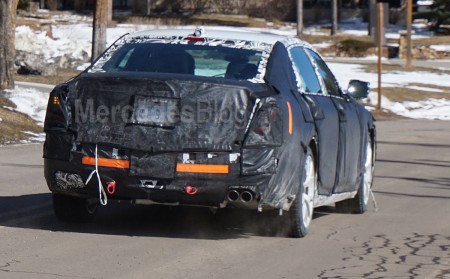 Back to design, the real disappointment seems to stem from the rear of the car which looks to be very mundane. We could be fooled by the camouflage (after all, that’s why it’s there), but it doesn’t really look like it. On the other hand, Cadillac suggests there’s another car – the true flagship – in the making, so hopefully we’ll see more of the Elmiraj there.