There was a heart-attack race in Austria for the Mercedes-AMG PETRONAS squad, with sparks flaming from Lewis Hamilton’s and Nico Rosberg’s racing cars! The German left form the 6th spot, but managed to recover and lead most of the race. But the Brit chased him to the end, attacked him and passed him by with one kilometer to the finish line. With a badly damaged car, Rosberg limped his way to the end and finished fourth!

Lewis Hamilton launched himself like a space shuttle in the Austrian Grand Prix, while teammate Nico Rosberg – all over the rear end of those in front of him, managed to gain three positions in the first eight laps. Max Verstappen followed in his footsteps closely. Young Verstappen ate the gap between him and the German, who though went into the pits and avoided the duel. Rosberg returned into the 14th position and started chasing for the top spots all over again.

At the very top, Hamilton and Raikkonen were taking turns in getting the best times.

Already in the fourth position, with same old (well, actually young, very young) Max Verstappen in his back, Rosberg started recovering the 20-second gap that separated him from Ferrari’s Sebastian Vettel. He was gaining even more than one second per lap. The three man at the top had not pitted yet!

Hamilton changed tires in the 22nd lap and returned 2 seconds behind teammate Rosberg, with the German getting a new lap record, falling under the 1 minute 10 seconds time.

At the front, Vettel started looking in the rear view mirror, seeing Rosberg closing in on him, with more than a second per lap. Immense misfortune for the Ferrari’s driver though, as his right rear tire exploded. 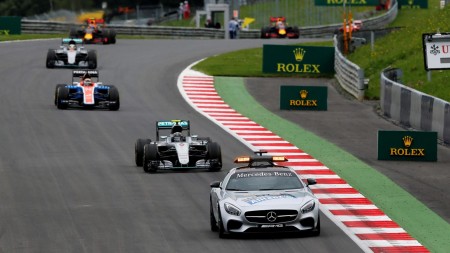 The Mercedes-AMG PETRONAS driver was first again and the pace slowed down, as the Safety Car was deployed. The Mercedes-AMG GT S took the drivers through the pit lane, to give time to the stewards to clear the racetrack.

The television replay showed that Nico Rosberg’s AMG collected plenty of debris from Vettel’s tire explosion and a bargeboard waved in the air at the left front side, impacting on his aerodynamics.

The Safety Car went out, the racing was back in, with Rosberg first and teammate Hamilton half a second behind him. Hamilton pitted first for softs and went back on the track in the 3rd position. Rosberg took the super softs and got back in front of the Brit.

Rosberg was then just half a second behind the Dutch at the front and he pushed determinedly. Then it was Hamilton’s turn to get the Dutch headache, but a maneouvre from his side put the Brit in the second spot 7 laps to the end. 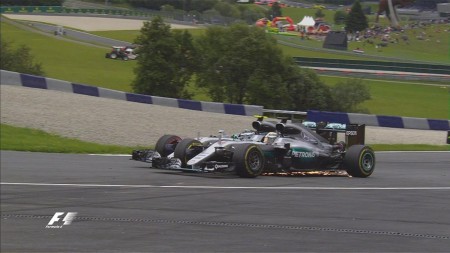 The final lap was one leaving everyone breathless. The Mercedes-AMG PETRONS drivers were at each other’s throats. Rosberg got a flat tire and lost the second and third positions, as Red Bull’s Max Verstappen and Ferrari’s Kimi Raikkonen passed him by. In front of the monitor, the head of the Mercedes-AMG motorsport division, Toto Wolf punches the desk in front of him.

Asked why the crowd is booing him, Lewis Hamilton answers arrogantly: “It’s not my problem, it’s theirs!” 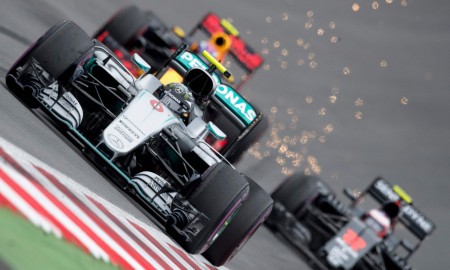 Nico Rosberg is under investigation for continuing the race in a dangerous situation. The German claims that the Brit overtook while the yellow flags were on! Stay tuned for more spicy news from the Austrian Grand Prix!