Someone is selling a Mercedes-Benz 600 Pullman, nobody wants to buy

Just blink and the value of this car grows. If it’s original. The one we are dealing with is a Mercedes-Benz 600 Pullman that rolled off the assembly line exactly half a decade ago. But it went through some changes that classic lovers might absolutely despise. Apparently, nobody wants to buy it.

It is not the first time we write about this car. It came to our attention once again, because it is still for sale, almost two years after we first featured it here on Mercedesblog.com. Why is it taking Mechatronik so long to get rid of it?

This car arrived in Lebanon in 1975. It was anthracite gray metallic and had blue leather on board. Later on, in 2007, it ended up in the hands of the Mercedes-Benz Classic experts in Malaga, Spain, and underwent restoration. The customer asked them to completely dismantle the car and put it back together. But he requested some modern touches that classic car lovers would disapprove of. That is probably why it has been on sale for over a year and never found a customer. 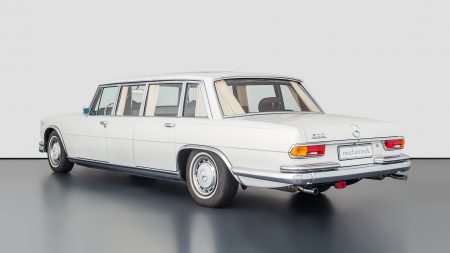 The experts rebuilt and repainted the body. They overhauled the engine, gearbox and axles. They also fitted various Maybach components on board the luxury limousine. The list includes the Maybach glass roof, that they specifically designed to fit the roofline and shape of the Mercedes-Benz 600 Pullman. There is also a partition wall between the front and rear seats so that the VIPs at the back benefit from all the necessary privacy at the push of a button. They will take their sit in two hydraulically adjustable seats inspired by the Maybach series as well. Two additional rear-facing seats can allow the transportation of two more people.

A flat screen with Alpine technology, from a Mercedes-Ben S-Class W221 Pullman, found its way on board the W100. The future owner will also receive two independently operating navigation devices. A laptop interface in the center console and a DVD player are also on the list of modern features of this 600 Pullman. The limousine also features the intercom from the W221, a reversing and a front camera to make handling easier. 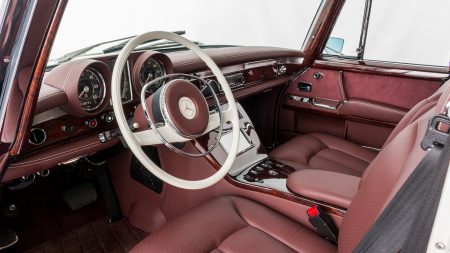 And the piece de resistance takes the shape of Swarovski crystals inserted in the door sills both at the front and at the rear.

The exclusive Mercedes-Benz 600 Pullman is for sale and as you can imagine, it doesn’t come cheap. Especially since the odometer only reads 1,200 kilometers (746 miles).

The iconic looks and the contemporary features add up to €2,320,500 (over $2,65 million). You should see it before you make the transfer though. You might either love or hate it. And that is only possible by an appointment with Mechatronik.