Someone actually cloned a Mercedes-Benz 300 SL Gullwing. And it looks spectacular!

When looking at it from outside, you can’t tell the difference from the real thing. There is no way you can spot any clue that it is not the iconic Mercedes-Benz 300 SL Gullwing itself. But the truth is that it was built in our times.

This Mercedes-Benz 300 SL Gullwing was made by John Sarkisyan and his team. It all began with a mold build around the real automobile in order to keep everything down to the last millimeter. There is something though that only the super specialists would nail: the replica is a bit shorter than the real thing.

It weighs half the weight of the original, because it is mostly made of fiber glass. Only the radiator grille cost 30,000 dollars, an information provided to convince that there is no silver bullet to get a 300 SL Gullwing. It is cheaper than a classic original, but not cheap at all. The cheapest original on the market is at least 800,000 dollars. 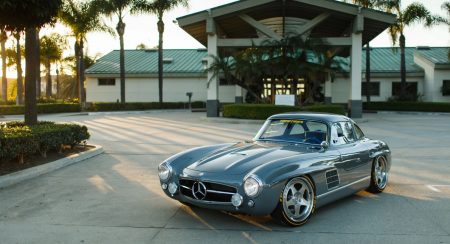 The interior has been recreated in an eye-catching neon shade of blue, but also updated. “It is half new and half old”, John Sarkisyan says, revealing that the seats are original, but the stitching pattern has been changed for a more modern approach. The case is there as in the original. HRE wheels were built especially for it, to fit the dimensions of the car.

“It is the hardest car we have ever built. We had no idea what we were getting into”, John says. He was never sure it would work.

John’s phone has been ringing since he first exhibited the model at the SEMA show in 2018. There are people asking him to build a replica for them.

What else is old, what is new, what is borrowed and what is… blue? You will have to watch the video to find out: