Soccer star Mesut Özil adds one more Mercedes to his garage that is already full of stars. The German with Turkish origins has recently slammed the premium car maker for not backing him up while other sponsors did.

A black Mercedes-AMG GT R is now part of Mesut Özil’s star fleet. The midfielder currently playing for Arsenal has just received his brand-new supercar, estimated at 165,000 Euros. The GT R is great company for his other Mercedes creations, a G-Class and an S 63 Coupe. Mesut Özil has also been the proud owner of a Mercedes-Benz SLS AMG.

Mesut Özil has been a brand ambassador for Mercedes-Benz, but the contract will terminate at the end of 2018. The German premium car maker has shown no signs of extension intension. He believes that his support for the President of Turkey, Recep Tayyip Erdogan. 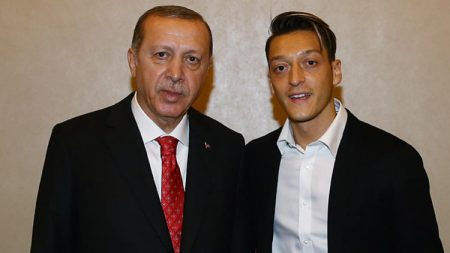 “After my picture with President Erdogan, they took me out of the campaigns and cancelled all promotional activities that were scheduled. For them, it was no longer good to be seen with me and called the situation ‘crisis management’”, the soccer player claims.

Even though a loyal customer of the brand, the soccer player has declared war to Mercedes, that has been a sponsor for Germany’s national team for over 40 years. Özil hints to the German Football Association lead sponsor and accuses the car company of simply airbrushing him off the World Cup campaign materials. Mercedes promised to investigate the claim.