smart Autokonexion is tuning taken one (tiny) step too far

This is not Photoshop. And if it were, it would be really, really bad Photoshop. But unfortunately it’s not. This, my dear friends – and we’re showing you this just so you know about it and steer as far away from it as possible – is the smart Fortwo by Autokonexion.

Apparently, someone had a look at the smart Fortwo and thought “hmm… this car isn’t boxy enough“. Then they studied the culprit on all three axes and decided it needed a little more width to complete its perfectly cubic shape.

Not a problem. Widen its tracks, throw some flared body kit panels (which they say are made out of carbon fibre) to cover the newly created gap and, presto, you now have almost two cubic meters of… car.

Autokonexion is offering this wide body kit for all owners of the previous generation smart Frotwo who are looking for ways to make their car look as ridiculous as possible. You can buy this and if you’re not able to pick it up from the company’s California HQ, they are more than happy to ship it wherever you are. Probably so that more people can live better lives by laughing their asses off when they see your funny looking little car roll down the street. The price is 3.200 $ for the standard version and 4.500 $ for a carbon fiber one. 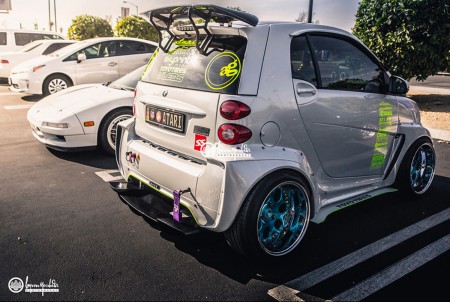 It looks like what a sports car would be seeing if it went into the house of mirrors at a funfair. All the elements of a sports car are there, they just look out of place because they’re crammed into a very tiny space. If Bugatti Veyron had a dwarf brother, it would probably look like this.

But there’s one smart Fortwo with the Autokonexion kit on that nobody will laugh at. It belongs to the company’s chief executive officer, Mike Burlas, and it is said that it somehow manages to pack close to 300 hp under the hood. I mean… under the boot floor. 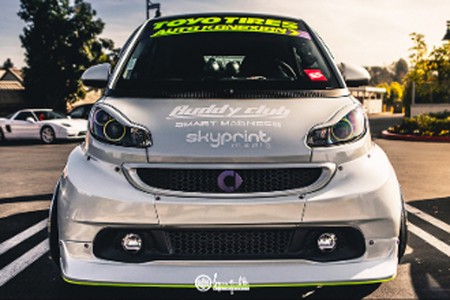 That’s not something you can buy to go with the aesthetic body kit though, and if you ask me, I’d say it’s a good thing. Just imagine sitting at the red lights in your Golf GTI, minding your own business, and being challenged to a drag race by something looking like this. And then losing. People have committed suicide for less severe reasons.