True luxury, it is said, is invisible. German Premium sedans can not respect this rule, because BMW 740i and Mercedes S 450 4Matic wear their brand logos confidently on the front hood. Which offers the finer luxury? Read yourself in auto motor und sport’s comparison test.

Presumably you have never thought about it, but “luxury” is one of the few Pan-European words, in almost all the languages ​​of the continent, the Latin loanword is used. Even in Albanian, Basque, Finnish and Hungarian, “luxury” means the same or something similar. Which certainly does not have to mean that the word means the same everywhere. In the automotive sector, the Europeans, however, are quite unanimous: Who says luxury car, usually means Mercedes. Which is a little unfair, because BMW has since the early 50s a luxurious competitor model for every big Benz in the program.

66 years ago, the BMW 501 debuted at the IAA, and although it was not a bestseller, it shaped the image of the brand in the economic miracle years. The 7 Series of today is seven model generations from the baroque angel of the 50s, while at least one of the original traits has been preserved in the 740i of the 2017 G11 series: the straight-six engine. 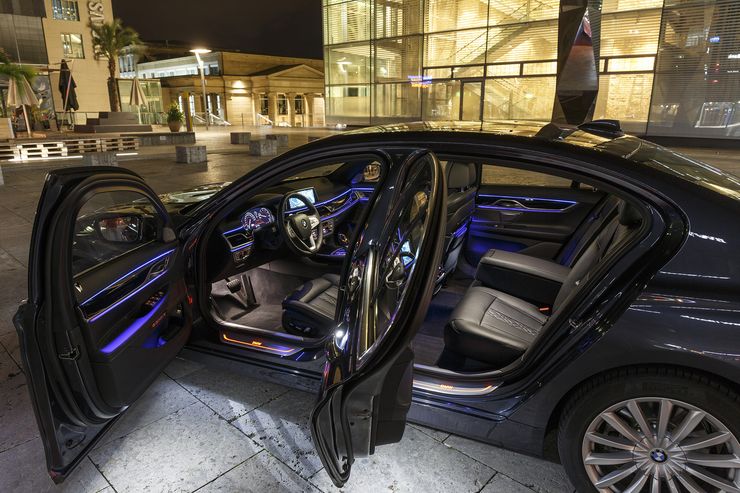 From the 65 hp two-liter in the 501, today BMW uses a twin-scroll turbo petrol engine with three liters of displacement and 326 hp. It’s named B58 and is a close relative of the smaller B48 and B38 petrol engines that serve in many BMW and Mini models. In Germany, it is the entry-level gasoline in the 7-Series range, the four-cylinder 730i remains reserved for other markets (China and Turkey).

The three-liter turbo makes 367 hp, by the way, and at the time of the test is only available as a four-wheel drive 4Matic. 22 additional horsepower and 250 extra Nm torque are supplied if needed via an electric booster starter generator. First of all, it is noticeable by the fact that it does not attract attention, but rather refines the start-stop function in such a way that hardly anything can be noticed when the combustion engine starts up, of which only a soft rumble is heard. 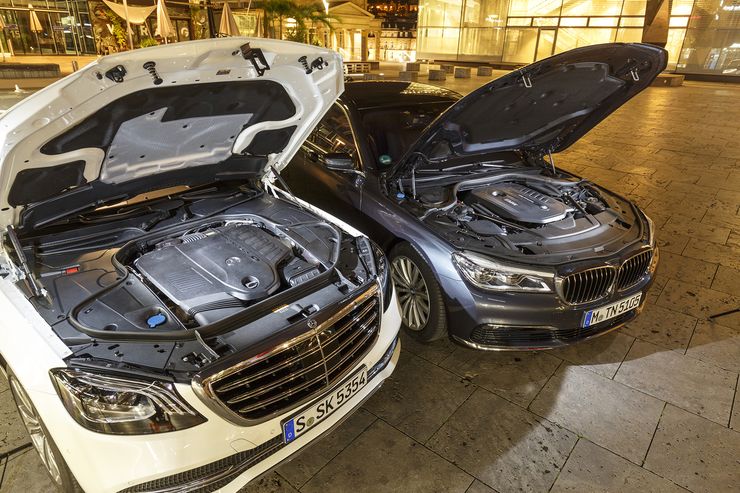 Incidentally, this is only slightly louder when the accelerator pedal is sunk into the carpet. Then it goes briskly forward, in 5.4 seconds, the heavy car reaches 100 km/h – missing the slightly optimistic factory specification by exactly half a second. Which, of course, does not change the impression of available and extremely sophisticated drive power.

This impression remains in mind when changing from the S-class to the BMW. It is a few horsepower weaker, featuring only RWD and seeming a bit more lively. The differences are minimal, but the BMW drive is acoustically more present and a bit rougher. After all, it goes a touch better, accelerates a tenth of a second faster from a standstill to 100 km / h.

The same applies to fuel consumption. Here, the Mercedes shows a little less talented than expected. 11.1 liters per 100 kilometers in the test, 0,2 liters more than the BMW. Still, that’s a good value, after all, we’re talking about a two-tonne five-meter sedan with performance that would have recently been available only in the super sports car segment.

Speaking of weight: The tested 740i is just 211 kg lighter than the S 450 4Matic, which accounts for about 65 additional kilos alone on the four-wheel drive. This is a not an insignificant difference even in this class, which the BMW translates into a more agile handling and more light-footedness in daily handling. But even here, the advantage of one competitor is more perceived than a measurable. 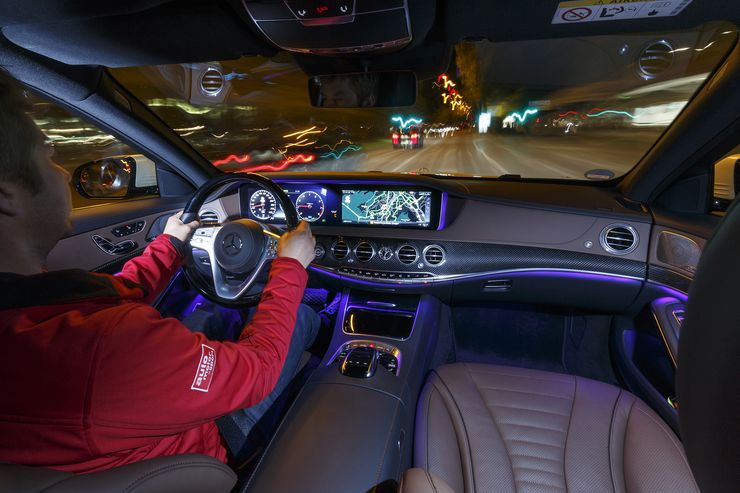 In any case, the S 450 completes the dynamic driving exercises in a similar way as the 740i, although the BMW has the driving dynamics system Executive Drive Pro (2,950 euros) on board, which minimizes body movements with its active roll stabilization system. The comparable Magic Body Control is not available at Mercedes for the S 450 4Matic.

In turn, benefits from its finely balanced, clean-responding steering, which acts only less direct and jagged than the extra charge Integral Active Steering (1,450 euros) of the BMW. They both convey a feeling for the front wheels – with slight advantages for the Mercedes.

Not infrequently, customers are not sitting on the steering wheel, but in the rear of the two sedans, and there may be other qualities in demand. In the suspension and seating comfort the Mercedes is king, and this has not changed with the facelift. The S-Class confidently battles with large and small bumps, and its armchairs are pretty much the best there is in automotive seating. 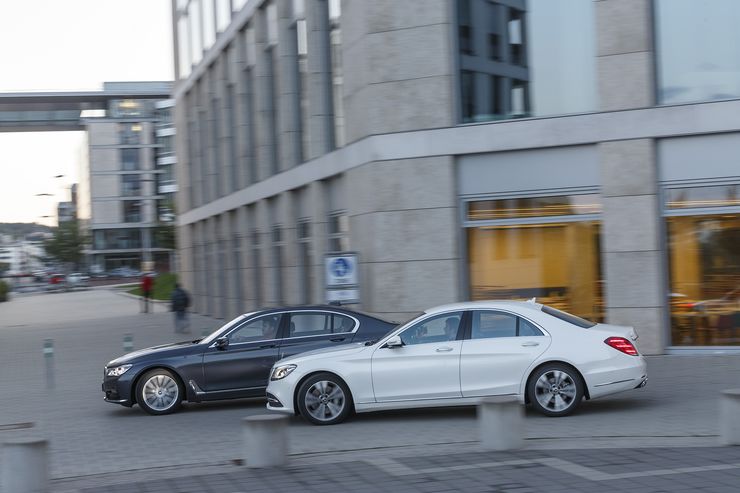 In addition, the freedom of movement in the S 450 is a bit more generous than in the slightly shorter 740i. The BMW also has a standard adaptive air suspension, but is a little less fluffy, especially over short potholes.

Increased entertainment potential is offered by the S 450 for the back seat anyway, at least if the optional Energizing comfort control (238 euros) and the massage rear chairs (seat comfort package, 1.975 euros) are on board. Then the rear passengers are kneaded by the air cushions of their armchairs and surrounded by the fragrance dispenser with flavors, while they relax.

The BMW is the more driver-oriented car, as is tradition, but also more uncomfortable. Only in front is much nicer. Just as traditional the S-class and 7-Series come with many technical innovations on the market. The Mercedes now makes the step-based speed adjustment a step further to autonomous driving. At the same time, the speed is adjusted proactively to the route by Distronic. The car speeds down before curves or intersections automatically and accelerates after the obstacles again, a much and gladly used feature.

What has not changed, however: The Mercedes is the more expensive car. Prices, warranty and maintenance costs are at a slightly higher level. Here, too, there are only a few dots. It is part of the luxury of being able to afford it. 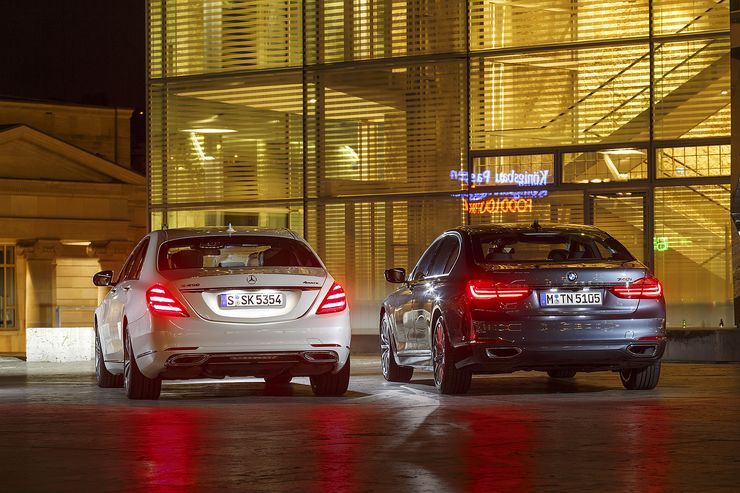 The slightly better price-performance ratio and the better engine bring the 740i here the victory. In contrast, the dynamics and consumption benefits are extremely low.

The S-Class continues to define the segment: it wafts along more dignified and drives a bit finer overall.