“It felt like the longest race of my life, I’m glad it’s over”, said Lewis Hamilton, after winning the Singapore Grand Prix, in the light provided by the track’s 1,771 lights. Starting from pole, the Briton stopped at nothing along the street circuit.

Right after the start, Ferrari’s Sebastian Vettel managed to pass Red Bull’s Max Verstappen for P2 at the Raffles Boulverd, right before the Safety Car was deployed. After the first round of pit stops, the Ferrari driver ended up behind Verstappen all over again, watching Hamilton lead away. 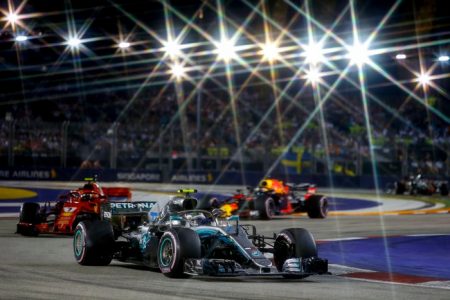 It was Lewis Hamilton’s 69th career win and his 80th career podium with Mercedes-AMG Petronas Motorsport, as the gap between him and his main rival, Sebastian Vettel, extended to 40 points. 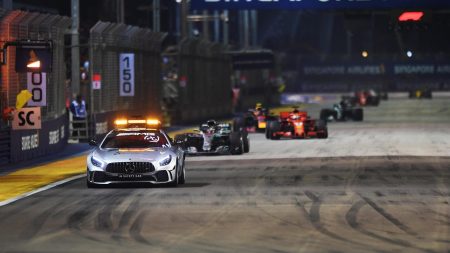 The other Mercedes-AMG Petronas driver, Valtteri Bottas, had to settle for the fourth place, managing to keep his fellow Finn, Kimi Raikkonen from Ferrari, at bay. Daniel Ricciardo could only get a P6 at the Singapore Grand Prix.

“Singapore has been our bogey track for several years, so it is a special feeling to come here and win this race on pace. The entire team has worked so hard to understand the car and take steps forward, especially since our defeat in Spa, and this result is an indication that our work is paying off”, says the team chief, Toto Wolff in Singapore. 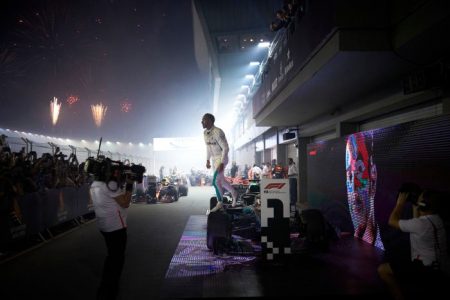 Worn out, Lewis Hamilton still joked after the race: “When Max was right behind, I had to go on the defensive, and I thought to myself “Bro, you’re not getting by – not today!” It was physically such a demanding race, so I’m relieved that it’s over now – it felt like such a long night, but I’m super grateful for the result.”

Mercedes-AMG Petronas Motorsport (452 points) leads Ferrari (415 points) by 37 points in the Constructors’ Championship. Lewis Hamilton and Sebastian Vettel will be chasing each other to their five-time world champions in two weeks’ time, at the Russian Grand Prix.