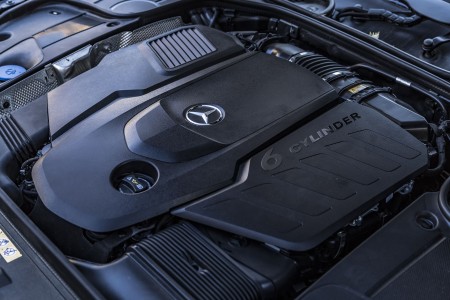 In an era of electrification and autonomous driving, Mercedes still clings to the proved diesel formula. And they might be right to do so. After twelve years since the last inline six-cylinder Mercedes diesel engine left the stage in favor of the more compact V6 formula, there is now again an S-class diesel with six cylinders carefully arranged one behind the other. The brand new 2.925 cmc biturbo engine (internal designation OM 656) is rated at 340 PS and 700 Nm – precisely 20 PS and 20 Nm above the 320 PS/680 Nm delivered by the 2.993 cmc BMW inline six-cylinder diesel (code B57), launched about two years ago. 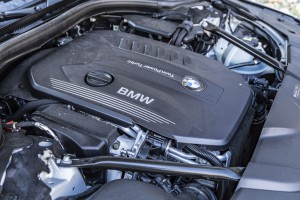 In its defense – trying to challenge the uncontested luxury champion – the latest BMW 7 Series does bring more technology than ever to the table, including a high-tech platform and a body that incorporate lightweight carbonfibre-reinforced plastics. Even more significant in the age of electrification and Greenpeace, the 740d betters the S 400 d on CO2 emissions with 134 g/km versus 147 g/km for the Mercedes.

So, has the S-Class finally met its match? Not quite. And to understand why we must begin with what you hear as soon as you press the illuminated (pulsating) start button in the S 400: nothing! Absolute silence, no vibrations, no clatter. Not until you push the gas pedal hard on kick-down does the voice of the engine finally becomes audible: discrete, cultured and as mannered as a petrol engine. 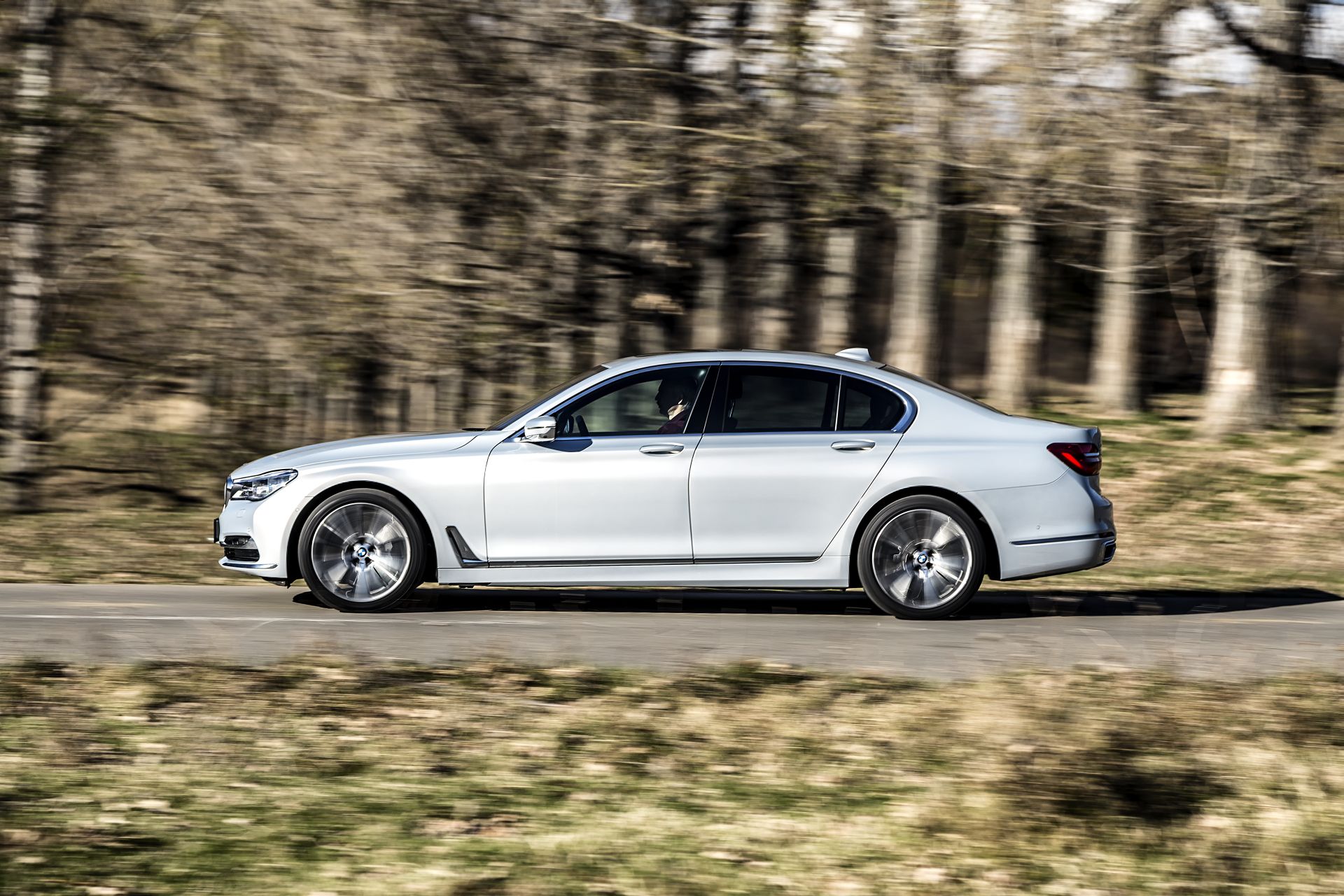 And how does the BMW, traditionally a creator of the finest engines in the world, fare up? Start the engine and disappointingly the classic hint of diesel noise is still there compared to the whisper quiet S 400 d. The sound is never too obtrusive or loud, but still making itself self-aware, keeping more in line with the core philosophy of the sports pedigree the Bavarians are so proud about.

Both test cars feature adaptive air suspension on all four corners and all-wheel drive. Our 7 series also came with Integral Active Steering (1,450 euro) bringing four-wheel steering and Executive Drive Pro (2,950 euro), which includes active anti-roll bars. The result is a 7 Series that corners with less body lean than a standard S-Class. However, the BMW’s light steering isn’t as satisfying and natural feeling as the Merc’s, even though it’s marginally more accurate when cornering quickly. 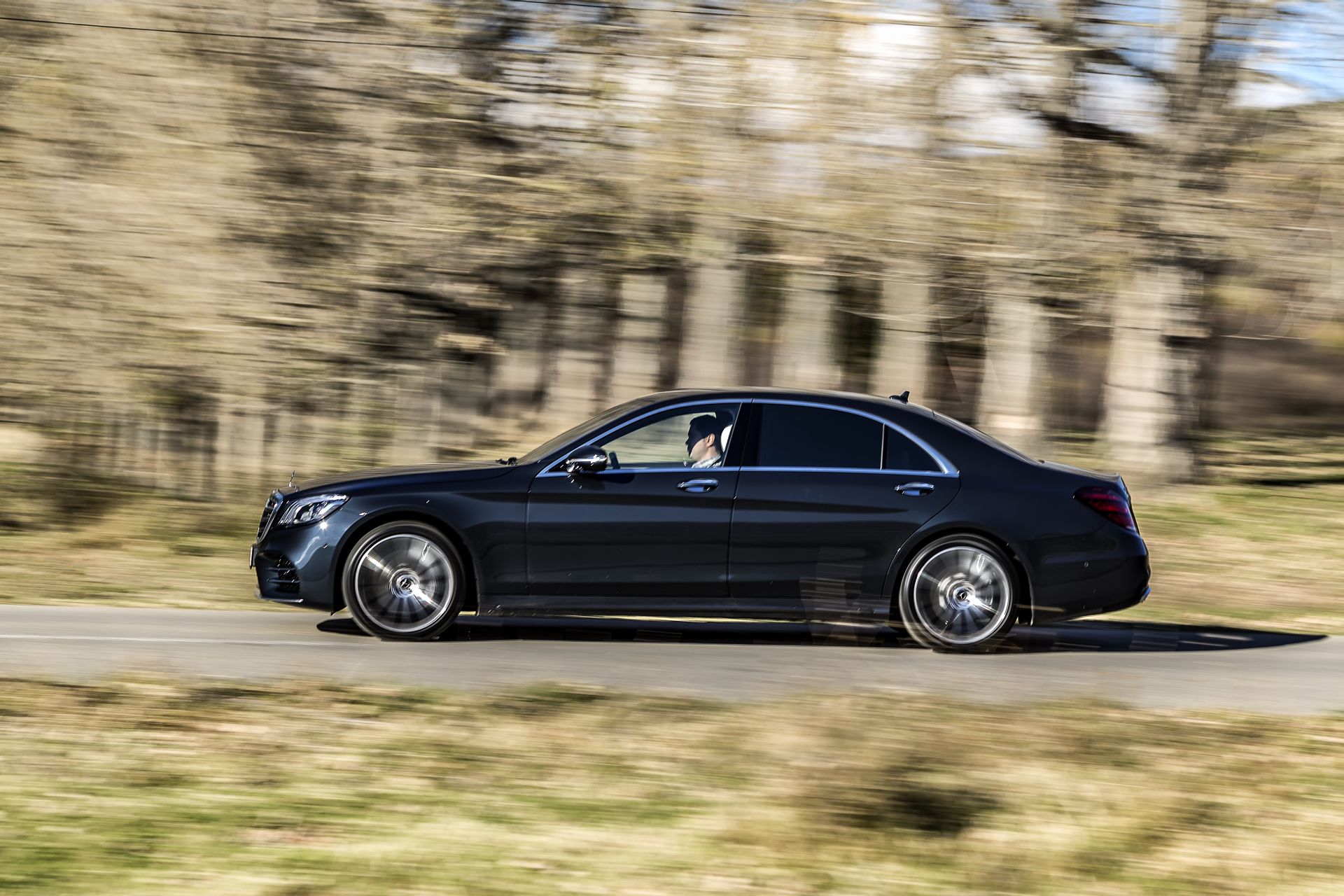 Still, above all, ride comfort is critical, since both the Mercedes and BMW will often be used as chauffeur cars, and here the S-Class has the edge. While the 7 Series glides over bigger intrusions, such as speed bumps, just as serenely as its rival, it tends to shimmy around a little more at low speeds, particularly over scruffy town surfaces. It also bothers occupants with the odd suspension clunk, and doesn’t ride as smoothly as the S-Class on the motorway.

The 7 Series beats the S-Class in terms of performance, though, covering the 80-120 km/h sprint in 3.5sec compared with the latter’s 3.6sec (60-100 km/h sprint equal at 2.9sec). True, both feel effortlessly smooth and responsive when you ask for a surge of acceleration, but the BMW’s eight-speed gearbox shifts slightly faster than the Mercedes nine-speed ‘box when pulling out of junctions or on to roundabouts. On the other hand, the S 400 d’s smoother-sounding engine and better-suppressed wind noise make it the quieter car at any speed: 53 dB at 50 km/h, 61 dB at 100 km/h, 65 dB at 130 km/h versus 56 dB, 62 dB and 66 dB for the 740d. 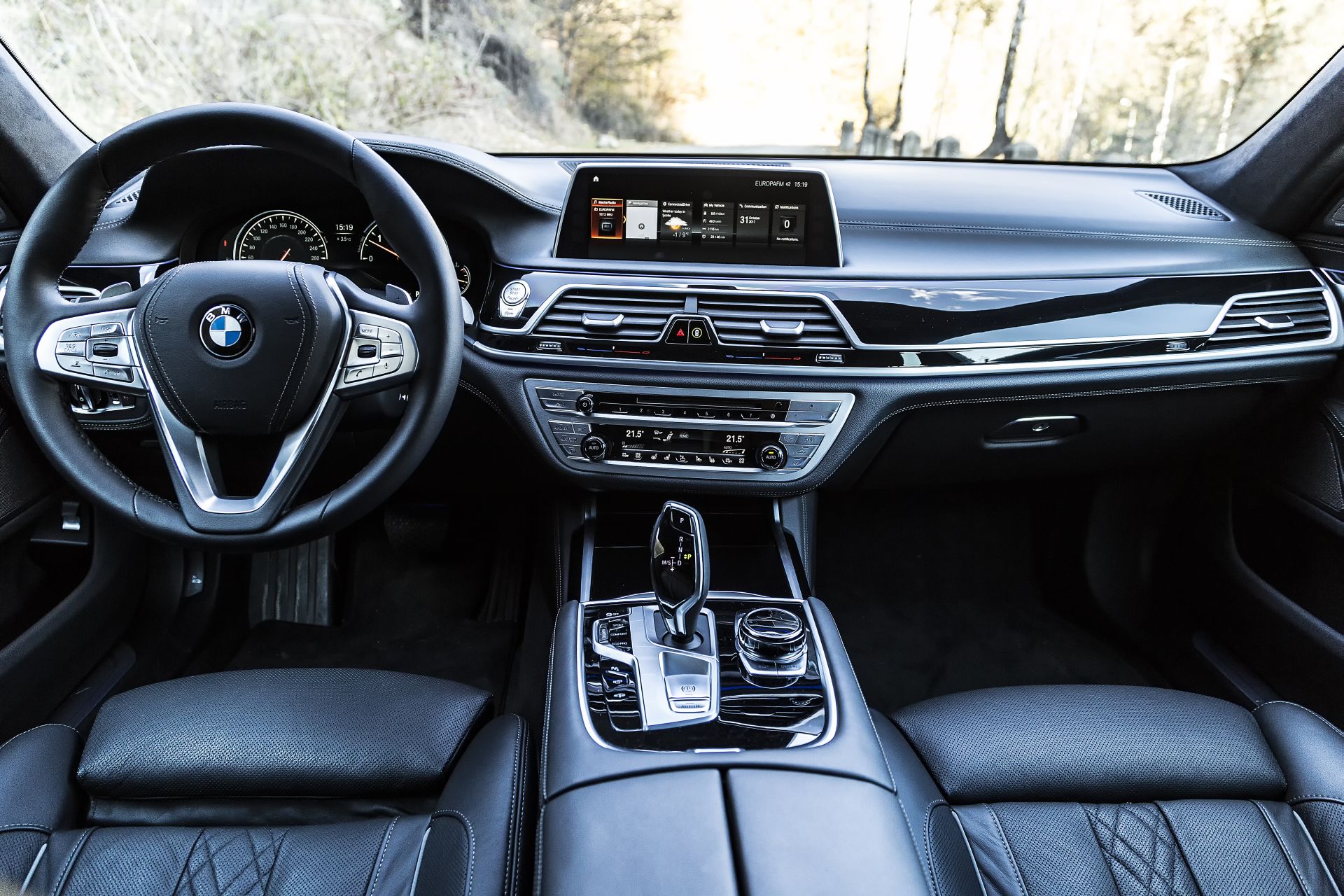 These are two of the finest car interiors on the market today. Both have broad seats that adjust electrically in every way you could possibly need, including the lumbar region, side bolsters and tilt, as well as the usual back, forward, and up and down. Huge, sweeping screens dominate both dashboards; a high-set, protruding 10.3inch affair in the 7 Series, and not one but two 12.3inch screens inset into the broad driver’s binnacle of the Mercedes S-Class. 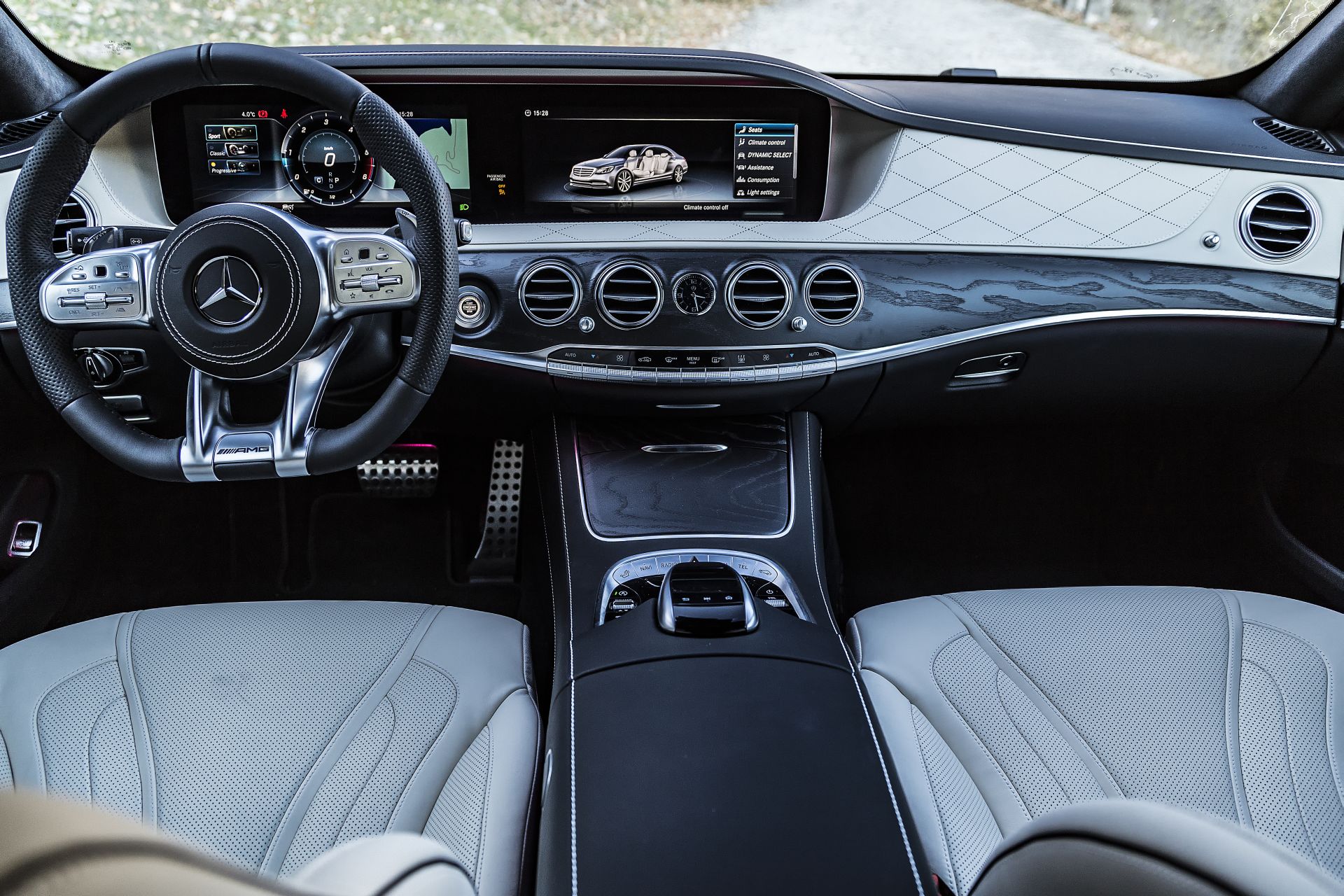 The 7 Series also has a second color display (12.3inch) replacing the conventional speedometer and rev counter of old. Both cars have rotary controllers and intermittently effective voice control for their navigation and audio functions, but BMW’s system is the easier to use and comes as a novelty with gesture control for media features like sound volume. If you prefer not to take your hands off the wheel, both models offer steering wheel controls for most of the important functions. 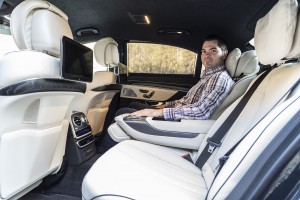 The comfort king S 400 d had the rear-seat comfort pack (1,975 euro), which adds electrically reclining right side seat, plus the rear Individual Entertainment system with two 10inch screens (3,213 euro). The sculpted seats are wide, supportive and satisfyingly squishy, and there’s tons of space in both head and leg room departments. The 7 Series was not equipped with a similar rear seat pack, but was just as lavishly comfortable, if slightly less roomy and airy feeling. Still, the BMW does come with a detachable 7.0inch rear tablet and offers the bigger and longer boot, which broadens to a usefully wide area behind the intruding wheel arches, while the S-Class’s square boot is narrower but has an underfloor storage area. The 740d can store 515 liter of luggage and the S 400 d slightly less, at 510 liter. 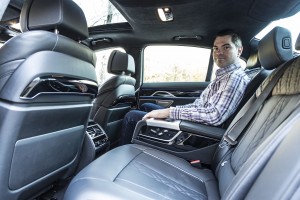 In terms of fit and finish, both contenders offer the absolute best in each brand’s view. That means soft textures, expensive scents, subtle mood lighting and a near-peerless sense of build solidity, whichever car you choose. However, the S-Class trumps the 7 Series in the finer details of its material finish and more dramatic and lavish looking dashboard and interior environment, simply crafting a better sense of occasion.

In a class of luxury and style above anything else, price is not the deciding factor. Still, we must say the Mercedes S 400 d 4Matic has a smaller starting price than the BMW 740d xDrive. The S-Class will also depreciate more slowly, making it the cheaper car to own over the years. Equipment levels are predictably extensive in both cases. LED headlights, leather, adaptive cruise control, 19inch alloys and the full gamut of multimedia and sat-nav functions – including wi-fi hotspots – are standard features on both cars. 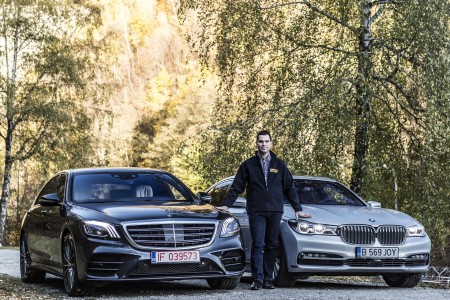 Both luxury specialists are absolute winners! However, with its better ride and refinement, its more remarkable interior and more fluid steering, the Mercedes S-Class remains the undisputed king of its class. The new BMW 7 Series is more agile and better appointed than it has ever been, but as an all-rounder, it still can’t match the all-mighty S-Class with its new, sparkling clean, Euro 6c certified, powerful, quiet and economical in-line six-cylinder diesel. This is one of the best internal combustion engines today and the best argument against all diesel detractors who think such motors are obsolete!