Shortest Formula 1 race ever. Why it finished after two laps behind the Safety Car

The Belgian Grand Prix was the shortest race in the history of Formula 1. It ended after only two laps run behind the Safety Car. Under the interdiction to overtake, the drivers finished the race just as they started it.

Therefore, the man in pole position, Max Verstappen, won the shortest and strangest race in the history of Formula 1. The weather forecast caused major headaches to organizers, stewards, drivers an teams in Spa-Francorchamps. The drivers went out for the formation lap, but went into the pits. Max Verstappen said they could race, while other drivers complained of poor visibility. 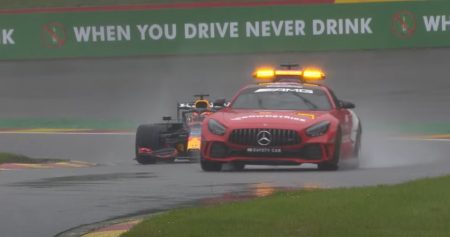 Three hours later, drivers started from behind the Safety Car. Two laps later, they went back into the pits, this time for good. F1 regulations impose on running to laps in order for the points to be granted. But a complete score requires a 75% of the race covered, which was impossible on Sunday in Spa. Only two laps allow half of the usual scoring. This is how Max Verstappen ended up with 12.5 points instead of the usual 25 that a winner achieves.

George Russell, closer to Mercedes-AMG after a spectacular quali and a second position in the shortest Formula 1 race ever

George Russell, who had been inches from a pole position in a spectacular Q3 on Saturday, finished second and took 9 points. The Williams driver also got his first ever F1 podium finish and he seems ever closer to a move to Mercedes-AMG Petronas to replace Valtteri Bottas from next season.

A joke became viral in Spa. Fans and teams agreed. The man behind the steering wheel of the Safety Car, Bernd Mayländer, was definitely the Driver of the Day. He was by far the one to spend the most time on the circuit on Sunday.