Several people were killed after the roof of a Mercedes-Benz dealership collapsed in Shanghai. Approximately 20 people were trapped under the rubble for hours.

More than 150 rescue workers carried out a race against time to save those trapped inside the collapsed building and pull the survivors from underneath the rubble of concrete, metal and glass. The police immediately cordoned off the area to prevent the loss of other lives. Buildings in the vicinity were evacuated. Several vehicles parked in the area are said to be covered in dust without suffering further damages.

All turned to dust – Car crashes into Mercedes-Benz dealership

Previous reports announced that at least five were killed by the crash, but the latest information indicates seven dead, with the two of them being trapped under debris for several hours. Fourteen people were rescued by the emergency responders. Twenty-four fire engines were deployed to the scene. 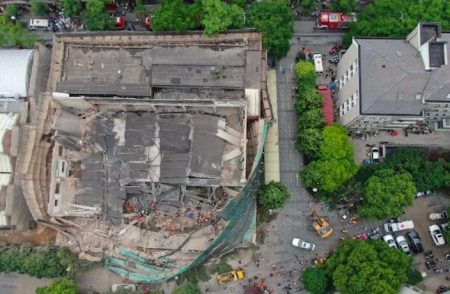 The injured were admitted to two major hospitals in Shanghai. One is believed to have suffered a brain trauma and is in a serious condition.

The building of approximately 3,000 square meters (32,000 square feet) was undergoing renovation when it collapsed at around 11:30 a.m. local time. Mercedes-Benz staff, as well as several customers were inside at the moment of the collapse, for which there is no official information yet.