You can’t escape the traffic rules in Germany. Not even if you’re just… an art exhibit! A policeman fined a truck without a driver for parking… well… upwards a building.

The policeman who posted the ticket on the windshield must have completely lost his sense of humour. In Karlsruhe, Germany, the sculptor (yeah, the sculptor, not the driver) must pay a 30-euro parking ticket for placing his Mercedes truck piece of art upwards a building in the city center. Austrian artist Erwin Wurm installed his distorted vision of driving right there to celebrate the city’s 300th anniversary.

The company responsible for the mounting of the truck in such an unusual position, with the rear upon the ground floor, almost reaching the next up, is going to make an appeal against the policeman who did not understand the joke, nor the art.

Just a couple of hours after the news surfaced the internet, the police department in Karlsruhe made an announcement that said the parking ticket was just a joke and should be treated as such. Well, that sounds like they are just trying to save their reputation, doesn’t it? A bit late for that… 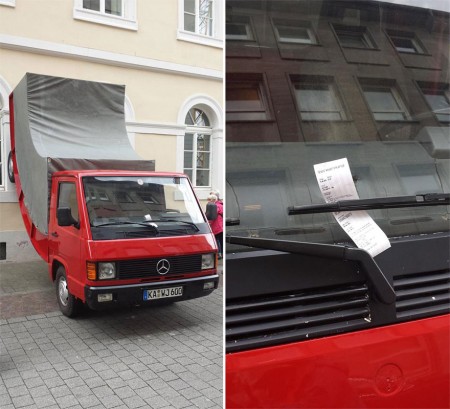 The bent red Mercedes-Benz truck, which obviously looks like a form of public art, is just an exhibit of the artist’s many pieces. He is famously known for stretching, inflating or twisting the vehicles he works on, into impossible funny shapes. Ok, the wall of a building is clearly not a parking area, but nor the truck is a real truck. Apparently, the police officer in Karlsruhe does not like his art!

The artist, Erwin Wurm, was born in 1954 and lives in Vienna and Liberg, Austria. Hopefully, police officers there can understand a work of modern art when they see one. Good luck with that, Herr Wurm!