Every new Mercedes models until 2021 detailed. In the coming years, Mercedes will be launching an onslaught of new products. We present the most important new Mercedes models, from the new Mercedes A-Class to the Mercedes GLB to the new generation of the G-Class and the EQ sub-brand according to auto motor und sport magazine.

In the compact range alone, Mercedes will launch 8 models on the second generation of the MFA platform (Modular front drive platform). The well-known derivatives of the A-Class are joined by a limousine in late spring 2018 and later the Mercedes GLB, which will close the gap between the GLA and GLC. In addition to the new series models, we also show all upcoming facelift models as well as new engines, all in chronological order. In November 2017, Mercedes will bring to the market its first large scale production pickup. The technical base is that of the Nissan Navara. In contrast to the badge engineering strategy of the Citan and Kangoo, the Mercedes X-Class becomes more independent with a more refined interior with typical Mercedes elements. In addition, the chassis is completely re-tuned. The X-Class in the basic version will get the four-cylinders from Nissan, this is the 2.3-liter turbodiesel with single and twin turbocharging and power outputs of 163 and 190 hp respectively.

Special feature: A V6 diesel and the permanent all-wheel drive will be in the top version series. An AMG-Style version is also planned. No, it will not be called CLE, even if it is based on the current E-Class. The new Mercedes CLS will be more elegant, the heavily exposed wheel arches are history, the Panamericana grill will be on the front, and the rear will have narrow lights. It is also clear that a new generation of the Mercedes-Benz CLS Shooting Brake will no longer be available.

Special features: V8-Biturbo with four liters capacity and over 475 hp as well as the new in-line six cylinder units, either in diesel or petrol form. Also new: The 48V electrical sub-network. In addition to a stand-alone 612 hp AMG version, which will clearly differ from the series CLS, there will also be a hybrid model. W177 is the internal code of the new generation A-Class. It is based on the already mentioned MFA2 platform, which will also carry the derivatives such as GLA or CLA. The vehicle’s weight is expected to drop by around 50 kilos compared to the current model, the wheelbase will grow by about two centimeters. The cockpit should be newly designed with dual free-standing screens.

Special features: The smaller engines come again from cooperation partner Renault. The 2,1-liter diesels are replaced by OM 654 units, as used in the new E-Class. In the case of petrol engines, the M264 units introduced in 2017 are launched, which have a displacement of 2 liters, direct injection and supercharging. Between the A250 and the AMG version with over 400 hp and a new nine gears double clutch transmission, Mercedes will slot another sporty model with about 270 hp. First of all, the G-Class will retain its angular look. But the model is 10 centimeters wider and no longer has a ladder frame. Instead, there should be independent suspension. Mercedes wants to achieve a significant improvement in terms of dynamics, but also more space for electronics. The new Mercedes B-Class is the second model built on the revised MFA2 platform. Technically, the B-Class uses the A-Class as its donor, but in terms of optics it will retain the utilitarian attitude. In addition to the infotainment and connectivity, the B-Class will be noticeably more comfortable, in line with the A-Class. W167 is the name of the new generation GLE, which will make its debut in 2018. The new Mercedes GLE is based on the MRA platform of the current E-Class and is to fall below the two-ton mark in terms of weight. In comparison with its predecessor, Mercedes also offers more off-road characteristics. This includes, in addition to more ground clearance and underride protection at the front and rear, improved axle interlocking, air suspension, differential locks as well as transmission with reduction possibilities. On the transmission side, the new nine-speed automatic gearbox is on board.

Special feature: In addition to the GLE as AMG 63 and the GLE AMG 63 S, Mercedes also has a GLE 43 with 401 hp. Also, a hybrid powertrain will be modified to fit into the new Mercedes GLE. The C-Class will be subjected in the spring of 2018 to a comprehensive model update which will see the C gain the dual-screen cockpit layout of its bigger brothers as well as new headlights with LED technology. The C 63 AMG output should increase to 522 hp, but without getting an all-wheel drive system. There is also a C 63 R Coupé in the pipeline. 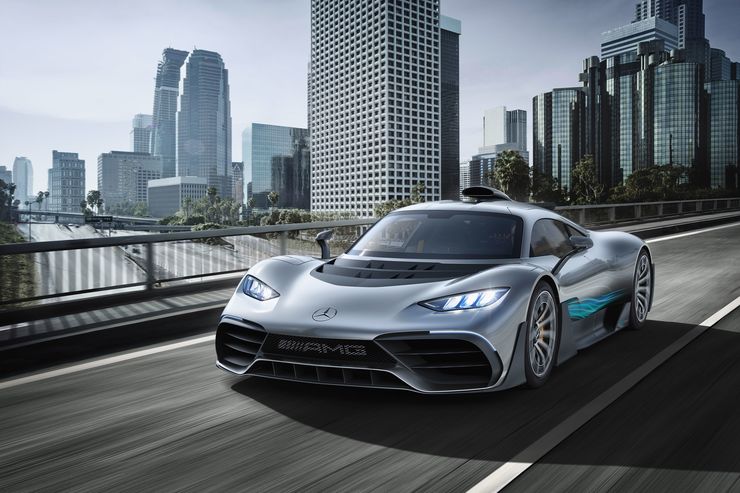 At the IAA in Frankfurt, Mercedes-AMG presented its own birthday present: the Mercedes-AMG Project One hypercar. The production model will be made in limited series, ranging between 200 and 300 units, with the majority of the vehicles already being sold. Cost point: from 2,275 million euros.

Special feature: The drive of the Mercedes-AMG Project One is to correspond to that of the Formula 1 racing cars from Mercedes: a turbocharged 1.6-liter V6 gasoline engine as well as two different additional electric engines – generator units (heat and kinetics, thus recuperation). The system performance should be about 1,035 hp. The combustion engine is supposed to deliver about 760 hp, the rest being made by the electric motors. The pure electric range should be around 50 km. The second generation CLA also uses the A-Class as platform donor and is again offered as a shooting brake – even after initial plans to ditch the model in the USA. The CLA II will offer more space in the trunk (430 liters) and for the rear passengers, although the length will be significantly shorter. In addition, the four-door coupe will come with a modified roof line. The A-Class transmits the engines for the second-generation CLA. The Mercedes SL will be the first model to be based on the new MSA platform – dedicated to sports cars. This base is scalable in length, width and height, as well as the wheelbase and lowers the vehicle weight. The new SL is supposed to weigh below 1,700 kilos. The new Mercedes SL will give up the foldable hardtop solution and, like the S-Class convertible or the Mercedes E-Class convertible, use a lightweight fabric roof fold. In addition to petrol and diesel engines, the MSA base also supports hybrid drives. As so, diesel engines in the SL can be excluded, but a hybrid drive is go.

Special features: In the “basic” version, the Mercedes will retain the SL 400 badge and gain the new three-liter Biturbo inline six-cylinder with a good 435 hp. The SL 500 starts with the 4.7-liter Biturbo-V8. Two AMG versions mark the upper end of the SL series. Mercedes is pushing a new generation of the GLA on the market two years after the facelift model from 2017. Thanks to the MFA2 platform, the new GLA II is considerably easier to use and will follow the lead of the A-Class in the area of assistance systems and infotainment. The GLA will also offer more space. As a further MFA2 based model, the engines of the A-Class are also used here. 2019: Mercedes GLS
The top SUV of the brand is starting its life on the MRA platform and comes back as a seven-seater on the market. In the case of the giant GLS, too, weight optimization is announced. Special feature: A luxury version under the Mercedes-Maybach sub-brand is planned. The rear passengers should have a lot of space – presumably the third row of seats will be omitted. The first EQ model of the new Mercedes electric sub-brand is an SUV the size of a GLC. The model is based on the platform EVA I. As early as 2016, Mercedes had presented a corresponding study. Two electric motors on the front and rear axle get their energy from a battery integrated into the vehicle floor between the axles. The power of the drive is scalable: up to 300 kW and 700 Nm are available, the range is up to 500 km. The modular lithium-ion battery comes from the Daimler subsidiary Deutsche Accumotive and has a model-specific total capacity of more than 70 kWh – but it is to be possible to go up to 110 kWh. 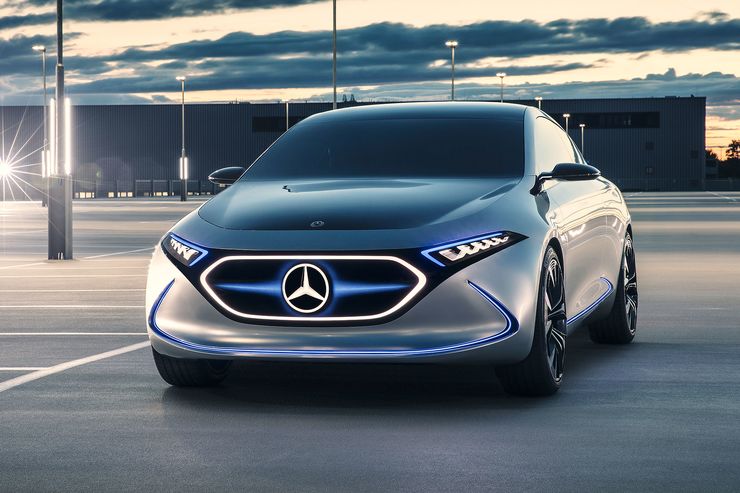 As a further model based on the EVA II platform, Mercedes will be launching the EQA as a compact model from 2020 onwards. Mercedes at IAA 2017 gave a first look at the small electric model.

In the further course there should be an EQ sedan of the size of a Mercedes C-Class, followed by a sedan and an SUV in S-Class format, as well as an SUV in the size of the GLE Coupé. They all have one thing in common: They are oriented on the look of the research car F 015 as well as the Generation EQ and EQA study and have a futuristic interior with a 24-inch TFT display. There is another screen behind the steering wheel, which replaces the conventional gauges. 2020: Mercedes SLC / SLA
The future of the Mercedes SLC is still in the stars, despite the miserable sales numbers. For reasons of cost, the small roadster will be based on the new MSA platform also used by the bigger SL. It is still a mistery if Mercedes will turns from the folding metal roof to a fabric roof. But that is speculation, as well as the rumor that Mercedes could offer a GLC as a convertible instead of the SLC, in order to be able to offer yet another niche product in the SUV boom. A second rumor says it could launch an SLA based on the A-Class platform as the eighth compact model. This model would then be no longer a roadster, but a sporty coupé cabrio. 2021: Mercedes C-Class
The new, fifth generation of the Mercedes C-Class will answer to the internal code W206. It is based on the new MRA II rear-wheel drive platform and should only evolve marginally in dimensions and design. As with the A-Class, the cockpit will consist of a dual-layout free-standing displays. On board are also the new diesel generation OM 654 engines as well as a plugin hybrid. In addition, the next C-Class offers the possibility of fully automated parking as well as a digital headlamp light, which can illuminate the road according to weather or traffic conditions.