In short, the new Dawn is the Wraith Coupe’s open-top alter-ego. The fixed metal roof has been axed in favor of a canvas soft-top which folds away at the push of a button, hiding from prying eyes under a wood-finished cover.

As tradition dictates, the new Rolls-Royce Dawn will feature four king-sized seats, with the rear-bench especially configured to mimic the comfort only a full-sized limousine can offer.

Tech-wise, the Dawn doesn’t bring anything truly new to the table. The new Cabrio can basically described as a Wraith without a hat. The monster 6.6-litre V12 will remain unchanged, offering the same 632 HP output. The only difference concerns the extra measures taken to counter the drop in torsional rigidity, a detail which can only signal an obvious increase of the Dawn’s weight compared to its fixed-roof brother. 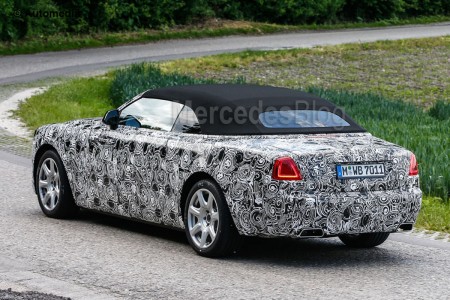 The Dawn moniker made its first appearance in 1949 alongside one the most revered open-top Rolls-Royces in modern history, the Silver Dawn.

Will the new Dawn remain king of the hill for long? No, it won’t, if we come to believe the latest unofficial rumors announcing the imminent launch of a Mercedes-Maybach Cabrio. Just as its four-door brother, the new model will be the equivalent of a special edition version, based on the upcoming S-Class Cabrio. Its launch date has not yet been disclosed, but since its donor won’t come to the market earlier than next year, it’s safe to assume the Maybach will reach showrooms no later than 2017.