Scorpions lead singer Klaus Meine feels the “Winds of Change” in his Mercedes SLS AMG Roadster. He lives his „Moment of Glory” every time he gets behind the wheel of the fireball he bought two years ago.

And it was love at first sight for the man who now “Rocks Like a Hurricane”, as the 80s song goes. “I just had to have one”, says Klaus Meine. “It came out in 2011 when they started building the SLS Roadster again, and I got one in 2013.”

The rocker spoke about his SLS to Motor Trend during the U.S. leg of their world tour. The singer rates the 570 HP car with 10 plus out of 10!

“It’s a beautiful car,” he says. “I’m driving a Mercedes car for many, many years, and all those years I was driving also an SL, a convertible, but this is like a real sports car. It drives very differently. It’s a lot of fun to take this baby out of the garage.”

“And from the technical point of view, Mercedes cars—you can’t go wrong with them.” 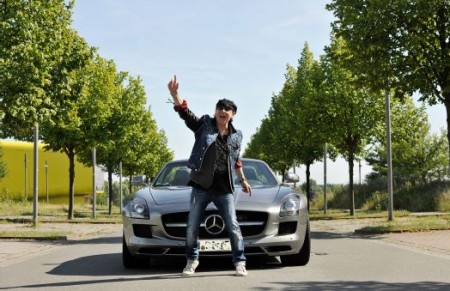 A little setback? But not quite a reason to give it up! “With the SLS, though, that is a real sports car, but this is so low on the street and the way it drives you feel every little bump in the road.” He says when driving the car fast, such as on the German autobahn, he’s got to bring a lot of power to tame the wild horse power in the car: “It feels so tight and you can feel every scratch in the road; you can feel it in your back and your whole body,” he says about his “Dynamite” vehicle.

“The SLS is a little wider than those regular Mercedes limousines or sports cars. It’s like a Hummer. When you drive a Hummer, it’s huge, so this feels in a way a little bit like the Hummer when you sit inside the SLS.” The SLS rarely come out of its garage in winter time. And now that his master is on tour, nobody dares to touch it either.

The perfect backup: the Mercedes ML500

With the winter close by, now that’s a car to face the snowy roads: the Mercedes ML500. “It gets you everywhere and has a lot of space inside,” Meine says.

“It’s a car for your daily life and also when you have to load it up with some stuff, especially when you go for like a little vacation”, he tells.

“That’s a huge difference to the SLS, where the only thing you can take along, maybe if you play tennis, like a little tennis bag, but other than that, there’s no real space. So it’s a good combination, this SLS and the SUV. It’s always good to have a bigger car.” 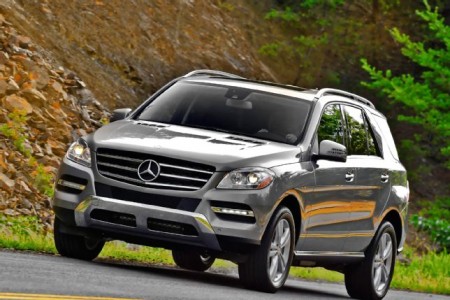 Even though the rock singer could afford just about any car out there, he stayed loyal to the brand. “I think when you grow up in Germany and you come to the point in your life where you can afford and have the choice between a Porsche, a BMW, or a Mercedes, once you make that choice, I think you stick with it,” he says. “You go with this kind of car pretty much all of your life.” And he is not the only one, apparently. Other band members are also crazy about Mercs.

“I think except for Matthias, our lead guitarist, who is a Porsche guy—Rudolf Schenker and myself, we both are part of the Mercedes family, and for so many years we’ve driven Mercedes,” he continues. Every new model coming out is enticing news for them both: “It’s like: ‘Wow, there’s a Mercedes coming out. We’ve got to go for it. Let’s check it out.”

Klaus Meine went for the roadster because he would rather keep a low profile. As if he can, with the roadster, though… “Wherever you drive the SLS with the gullwings to, it’s almost like a show when the doors flip up. It’s like you’re on a stage. I decided this is not what I want, because I have a lot of applause every night when I go on stage. So I don’t need it when I drive my car around the corner to the gas station. ”

So Meine took his time and, a year later the convertible came out. “Then I knew this is my car,” he tells. “I love it.”

Has he come a long way from his first car, a Volkswagen Beetle, back in the 70s…